It’s Friday and we hope you’re all staying safe inside your homes (if you can). Here’s some TV you can catch up on while you’re there! Alex was actually Supergirl in this week’s Supergirl. Back from the brink, One Day at a Time returned to soothe our hearts and not a moment too soon. Feel Good’s Mae Martin talked with Drew about dating and how to survive a quarantine. Last night on Grey’s Anatomy, we found out that Dr. Teddy Altman has been bisexual this whole time and the episode blew Carmen’s mind. The third season of the OG L Word aired almost 15 years ago, but WOW did you still have a lot of strong feelings about it (57 of them, in fact!). Oh and by the way, Wynonna Earp’s Dominique Provost-Chalkley came out as queer! 🎉 🎉

Also, the TV Team is still covering your social distancing entertainment needs! This week we released a list of All 41 Lesbian, Queer & Bisexual (LGBTQ+) TV Shows on Amazon Prime and The 14 Lesbian Movies Streaming on Hulu (including, for example, Portrait of a Lady on Fire, WHICH RELEASED AT MIDNIGHT!! So your weekend plans are set!)

+ Last week, the firefighters of Station 19 lost one of their own, Rigo Vasquez, and everyone’s trauma session about that turns into long overdue personal counseling. Tracie Thoms guest stars as firefighter turned shrink, Diane Lewis, who comes into Station 19. Maya’s session with her reveals what we’ve seen all season: the toxic influence her relentless father has had on her life. Diane urges Maya to let herself rest. Maya asks Carina if she’ll take some time off, so the can getaway together. Of course, Carina says yes. — Natalie

+ Deputy wrapped up its inaugural season this week and, sadly, it didn’t give Bishop nearly enough to do. However? They do end the season happy and with a new woman on their arm. — Natalie

+ This week on Top Chef, our three queer cheftestants — Lisa, Melissa and Karen — managed to survive another week in an exceedingly tough All Stars competition. — Natalie

+ Thanks to everyone being inside, Killing Eve is returning TWO WEEKS EARLY! Get ready for some murder on April 12th! — Carmen

+ On top of being pretty excellent television, Little Fires Everywhere is also pretty damn gay. I’ve got both eyes on it, and I recommend that you do, too. — Carmen

+ Have you watched Motherland yet? You should watch Motherland. We’ve got coverage coming on the way. — Valerie 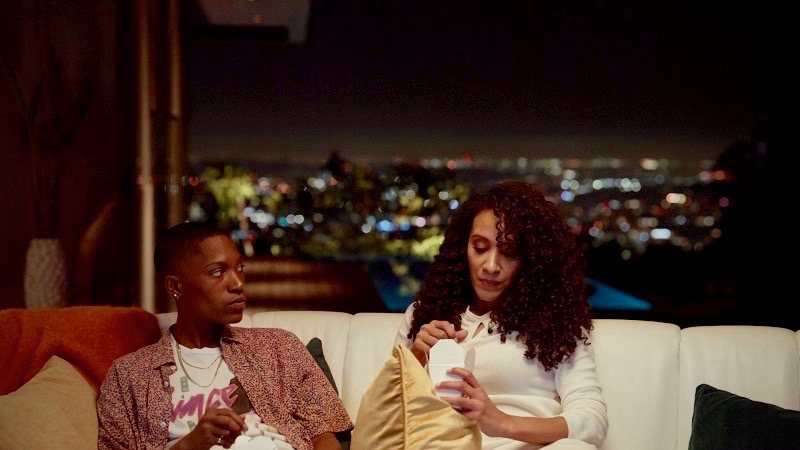 You could call this a “Situationship,” I call it trouble.

After a mid-night rumble, both literally and figuratively, Hattie is roused from her sleep by a call from Lorraine. At first, it seems like a sweet gesture — calling to check on Hattie after the earthquake — but then Lorraine reveals that there’s another woman in her bed and invites Hattie to join. Recognizing the pettiness, Hattie adjusts her camera’s point of view so Lorraine knows that she’s not spending her nights alone. But the shot also reveals that Hattie’s still staying on Marie’s couch so it’s not that much of a flex. Lorraine toys with Hattie a bit more, promising to, maybe, connect later, before they hang up.

At work, Ida B. instructs Hattie to scan some of her old manuscripts — stored at her home office, no less — and save them to her laptop. One of the more frustrating things about Twenties is the way in which it clings to the story of Lena Waithe’s come-up even when those details no longer make sense, given the time we’re in. Maybe, in 2007, when Waithe’s working with Mara Brock-Akil on Girlfriends, spending all day scanning documents on a flatbed scanner makes sense, but in 2020? A trip to Kinko’s would’ve had this handled in 10 minutes. But, I guess then we wouldn’t have seen Hattie discover the script for “Ghost Lullaby”… a play she reads and gets so enthralled with, she stuffs it into her backpack.

Later, Ida comes home and she and Hattie settle into an easy and flirtatious, but problematic, rapport. As they settle in with a documentary and some Chinese takeout, Lorraine interrupts, pestering Hattie with messages. This time, though, Hattie ignores her, choosing instead to spend more time with Ida, who makes her feel alive. Hattie laments her propensity for chasing what she can’t have and Ida agrees. She doesn’t think Hattie really wants to be in a relationship. Hattie offers a meek defense but Ida pushes her towards the truth. Hattie admits that she avoids relationships because she’s scared of someone falling out of love with her. Ida insists that hearts, including hers, were meant to be broken.

The next day, Hattie’s best friends call her night what Ida B. what it was: A date. Marie warns Hattie that Ida’s just looking for attention but Hattie’s more than ready to give her boss all the attention that she needs… and, as messy as it’ll probably be… so am I. 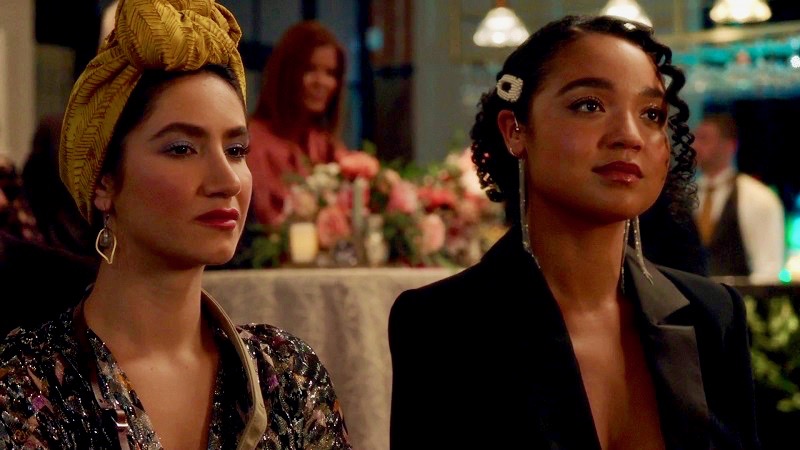 Armed with RJ’s tax returns, Kat and Adena interrupt their boss’ lunch date and confront him over his decision to squash their protest piece on conversion therapy and his support for the state senator promoting the practice in Alabama. Adena threatens to expose his shady politics when RJ’s lunch date interjects. Turns out, she’s an attorney who promises that if Kat and Adena continue with their threats, they’ll be fired from Scarlet, blacklisted in publishing and sued by her law firm. She dismisses the crusading exes outright and, having dramatically overplayed their hand, the two return to Scarlet to regroup.

A quick Google search reveals that the dismissive attorney was RJ’s daughter, Ava Rhodes. Adena’s determined to ensure that RJ doesn’t get to dictate what the public sees and vows to release his tax returns. Kat warns against it — her visa is contingent on her continued employment, after all — and ultimately Adena agrees to keep her fight within the system.

But, as the girls prepare for Sutton’s wedding, it’s clear that Kat’s still determined to do something about RJ. She checks her phone and learns that the senator voted against a bill to ban conversion therapy and Adena — who’s there shooting the wedding as a gift to Richard and Sutton — reminds her that she couldn’t have stopped it. She promises Kat that they’ll deal with RJ, in time, but Kat feels a renewed sense of urgency… on behalf of Travis and Adena. At the reception, Kat tells Adena that she’s going to expose RJ for the hypocrite he is.

“You know, I used to think that we were together because of love but I’m starting to think it’s something bigger than that… the truth,” Kat tells Adena, as they sway to the music.

Over Adena’s objections, Kat risks it all by tweeting out RJ’s tax returns. The revelations force him to step down as CEO but he takes Kat down with him: The board votes to terminate her contract at Scarlet. This should hit harder than it does, but the last time the board fired someone, Jacqueline was back within a few weeks. As Kat leaves the building, she passes Ava Rhodes and, based on her long, lingering look at Kat, I suspect she’s just as bothered by her father’s support for conversion therapy as Kat is. She may, in fact, be a victim of it. We shall see.

The Bold Type‘s midseason finale ends as the show always should: celebrating the sisterhood between Sutton, Jane and Kat. 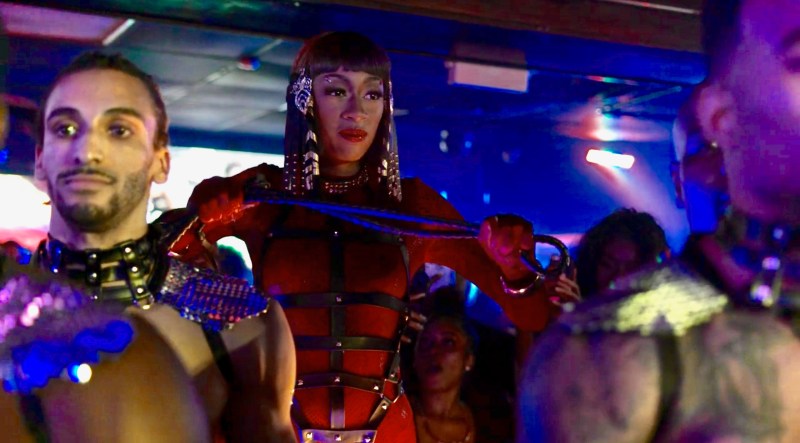 Since Boomerang started its second season, they hadn’t given Tia much to work with — that is, until this week, when the episode opens with Lala Milan doing a complete homage to queer femme icon Grace Jones as none other than the diva Strangé herself from the original film (PS: If you haven’t seen 1992’s Boomerang, Grace Jones’ performance is so singularly hilarious that I truly can’t describe it. It is more than worth the $1.99 rental fee). OK, so back to Tia.

Tia’s recreating Strangé’s iconic opening scene from the film, except she’s repurposed it as an intro to her strip club routine. She’s up to a half million followers on Instagram, and this is the first time she’s ever been paid five figures ($10K to be exact, minus expenses) for a dance. Tia’s really feeling herself after her sudden success and her attitude is … well, pretty damn annoying, to be honest. Don’t worry though, because the other dancers at the club are about to knock her down a peg — or a thousand.

In the dressing room, when the other dancers rightly complain that Tia’s taking up all the oxygen in the room, she goes on and on that her presence is bringing more customers into the club, which means everyone’s getting paid more in tips (not true). One of the girls call her “the 1%er of strippers” who is trying to “‘Make the Strip Club Great Again.’” My other favorite one-liner? “Girl, go on somewhere with all that Reaganomics. The only trickle-down we getting, we gotta clean it up with some tissues.” Black women who can hustle and still break down ill-fated Republican economic policy? This is the kind of sitcom content I LIVE FOR!

So Tia’s gotten her ass thoroughly handed to her, but at the end of the night, there’s a little hope on the horizon. One of the dancers who was originally most angry with her, Dream, has a sprained ankle. Tia goes to help her. While the two let their guard down and bond, Dream tells Tia that her real name is actually Dorothy — like from The Golden Girls. Tia jokes that Dorothy was a lesbian (#facts) and Dream lowers her lashes and says, “What’s wrong with that?”

Now last season Tia had a fine ass butch girlfriend named Rocky. I don’t know where Rocky is at the moment, but the way Tia’s looking at Dorothy, I’m thinking Rocky’s either already out on the curb, or she’s about to me — real soon.

Legacies 216: “Facing Darkness is Kind of My Thing” 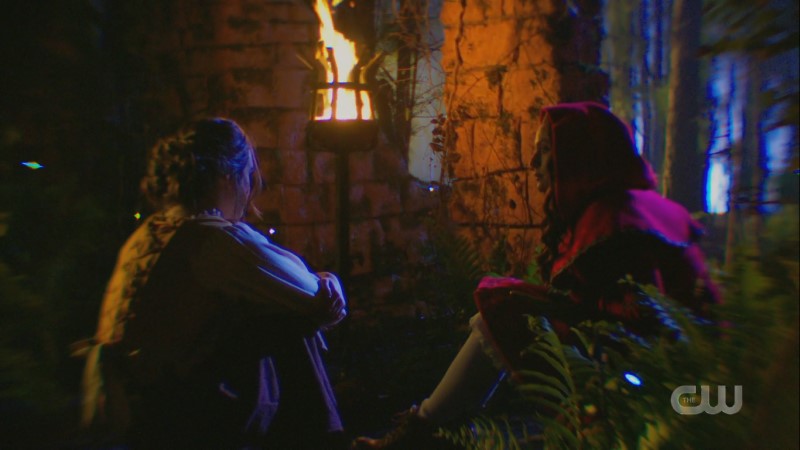 This is a happily ever after I can get behind.

This week, Hope dove into Josie’s mind to try to get the real Josie to overpower Dark Josie, because as fun as she is, she’s not the real Josie. Hope finds herself in a fairytale with Josie under a sleeping spell and a rude pig telling her that she can’t do magic or the darkness will come. The pig suggests Hope try kissing Josie but Hope says a non-consensual kiss isn’t the answer. (We find out later that the pig is actually Josie in disguise so I’d say we have our consent in the future, Hope.) Hope helps Josie see that magic and strength aren’t necessarily evil and Josie learns to trust her own power and fight the darkness inside her. The issue is, even though we have our Josie back, Hope is still in a sleeping curse of her own; possibly because Dark Josie turned Hope into stone while in her subconscious. So maybe there’s still time for that True Love’s Kiss after all. (Side note, Jade was MIA again but there WAS a Penelope mention because it seems Josie is still holding on to some pain from that, understandably.) Unfortunately because of the nationwide quarantine situation we’ve got going on here, this episode had to spontaneously serve as the mid-season finale, and possibly the season finale depending on when things are up and running again. I’ll miss these strong-willed supernatural teenagers!!