Previously on Supergirl, Kelly found glitches in Obsidian’s VR tech, Richard Bates got stuck in his VR and got taken away by a Leviathan woman, and the Danvers sisters got the call that Jeremiah Danvers is dead… this time, for real.

J’onn and Kara are talking about Jeremiah’s death; he was doing humanitarian acts in the Andes and he just died of a heart attack. No alien threat, no Lex conspiracy. Just natural causes after a lifetime of extreme stress. Kara is relieved to know he was truly a good man in the end, but of course is sad that her Earth Dad is gone. J’onn reassures her that Jeremiah loved his daughters, and Kara knows it, because Eliza told her so.

Kara and J’onn go to Alex’s apartment, where Kelly answers the door. Kara is so grateful Alex has Kelly in her life right now, and goes in to fetch her sister for the funeral. But Alex declares she’s not going. She starts lashing out at her sister, saying Kara doesn’t know how Alex feels, that Jeremiah has been dead for her for years, that Alex held out hope that he was a good man for years, but when he finally proved he was… he left.

Alex looks at her little sister and says that his obsession with keeping Kara safe is what ruined her own relationship with her father. Why she felt tossed aside. Kara’s voice quivers and she has to sniff to keep from crying as she asks Alex what she should tell Eliza Danvers when she asks why her oldest daughter isn’t at her own father’s funeral, but Alex says she doesn’t care. 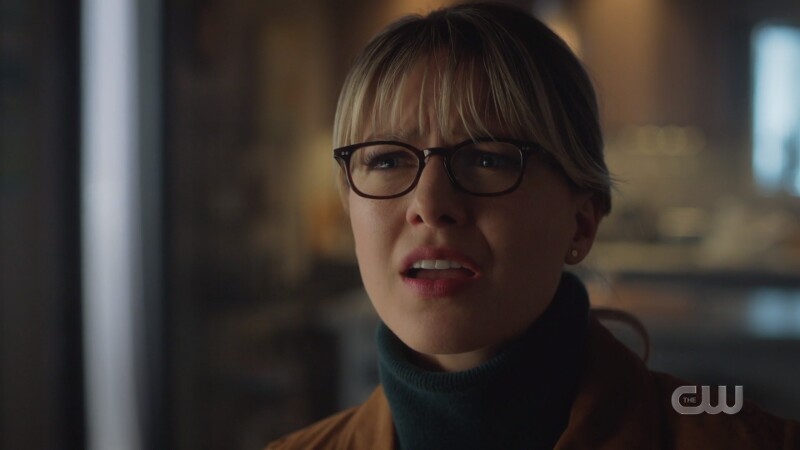 “It gives me belly rumblings when you guys fight.”

Kelly assures Kara that Alex is just grieving and reeling and that there’s still time to convince her to get to Midvale, so J’onn and Kara take off. Kelly turns her attention to Alex, but Alex only has eyes for wine, despite it being early. Alex snaps at her girlfriend now, saying she’s already had to mourn her father over and over and over again. She is too tired to do it again. And she’s not in the mood to be psychoanalyzed by her girlfriend.

She asks Kelly to leave her alone, and Kelly agrees to give her some space, but makes sure Alex knows that she loves her, and that she will be there for her no matter what. 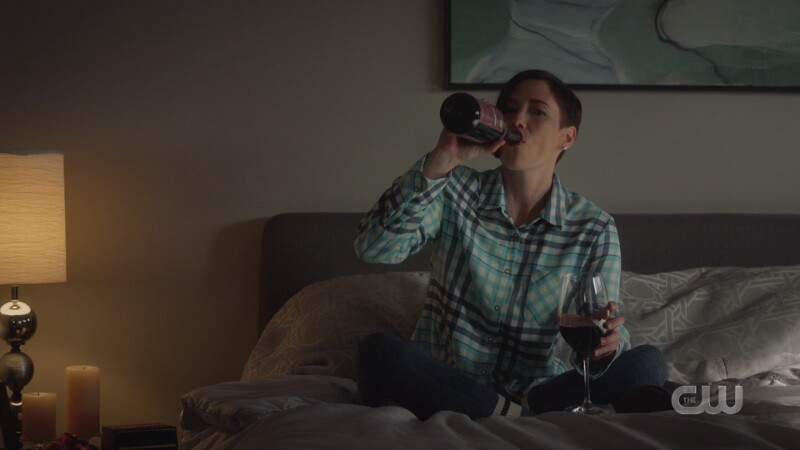 Actual footage of me back in the first days of social distancing.

After Kelly leaves, Alex finds one of Kelly’s VR therapy pamphlets and decides to try it for herself. She pulls out some Obsidian lenses and puts them on, and decides to go to the world where she’s Supergirl. Her outfit is black and blue and her billboard is all around National City and she’s so pumped to go punch things. 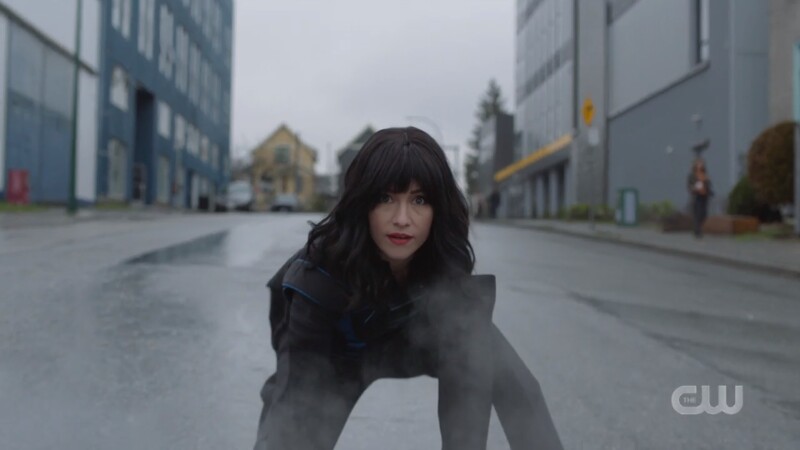 I mean *I* always knew she was Super.

Kelly, apparently lacking a set for her own apartment, heads to work to give her grieving girlfriend space. She is looking wistfully at a picture of her and Alex when William comes in to talk to her about the Danvers girls and their loss. Apparently Kelly and William have had a few lunches together in their office building since he came to game night because they are quite chummy now, and Kelly just spills all of Alex’s business to this man. William offers to distract Kelly from her troubles by telling her about Lex’s satellites that line up with his Obsidian launch tour. Kelly doesn’t think it has anything to do with the launch directly since Obsidian doesn’t use satellites, but she’ll keep an eye out for sketchiness there. 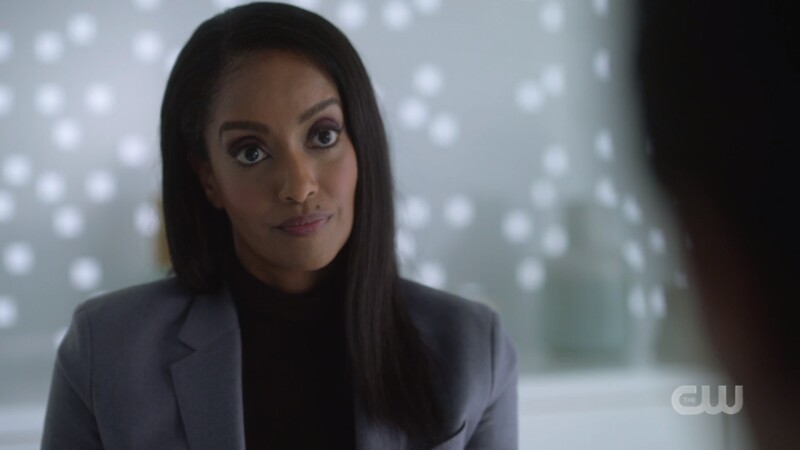 “Look, I don’t love that it’s you and me alone in these scenes either, but we gotta take what screentime we can get these days, so work with me.”

She mentions Richard and the hacker as the only sketchiness she’s really seen, and William asks if he was working with Lex; Kelly doesn’t really think so but she knows with Lex anything is possible.

Meanwhile, in Obsidian, Alex is flying around checking out the VR world. She sees a man playing guitar and chats with a woman who goes by Treasure Hunter Tilly, but whose real name is Bonnie. They talk a little about how bad the real world sucks, about Bonnie’s sister Jill who has cancer, etc. But in here it feels good, even if it’s just for a little while.

She mentions that the man at the guitar is really called Derek and is in here a little too much, in her opinion, before heading off in a chopper.

Before Alex can think too much about it, a dragon flies in and SuperAlex is called to duty. 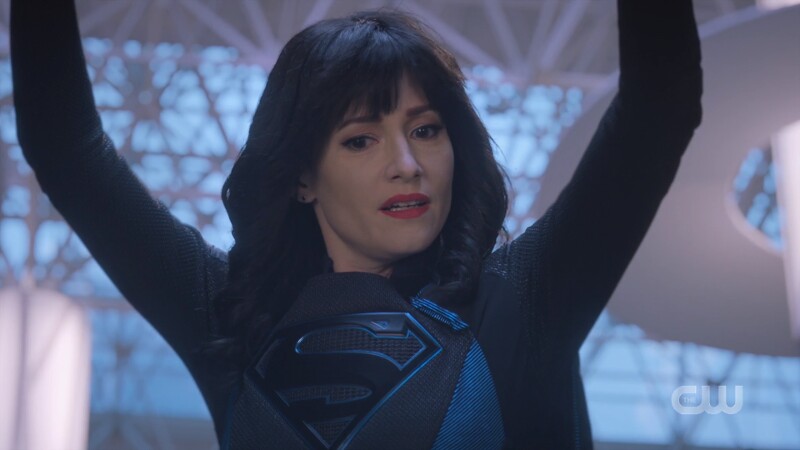 The wigs on this show are notoriously bad but I really dig this one on Alex.

Before flying off after the dragon, SuperAlex mentions something about this being more fun than the real world, and it seems Derek has forgotten he’s in VR. And then we learn that he’s wrapped up in tinfoil in the warehouse of people-burritos the Leviathan Woman is collecting.

In the VR sim, Alex tries to channel Kara while fighting the dragon, but has a hard time getting her heat vision to work. But then SuperAlex saves the day and everyone claps. She loves the feeling of being the hero and heads off to celebrate at the local gaylien bar. 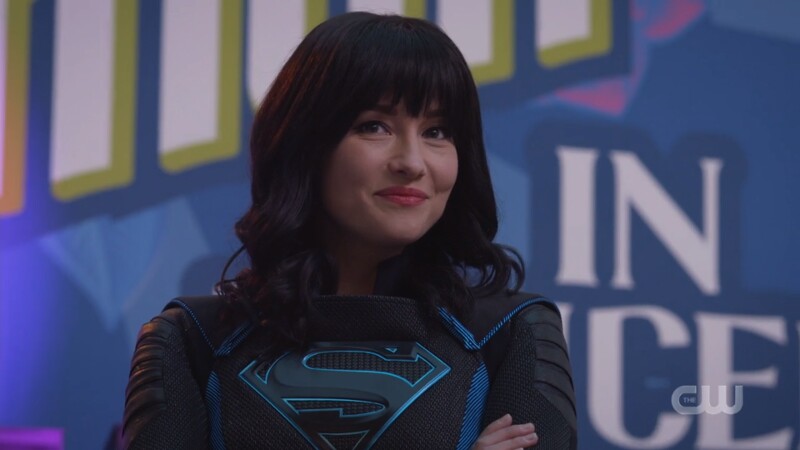 Out in the real world, Kelly gets an alert on her phone that the fail safe is still glitching and she’s worried people could still be stuck in their simulations. She goes to Andrea to bring it to her attention, but Andrea promises her it just got caught up in a bureaucracy bottleneck and that it’s nothing to worry about, that it will be fixed soon. She basically gaslights Kelly into thinking she’s worrying for nothing. Kelly only looks moderately reassured.

In VR National City, Tilly finds Alex eating blueberry pancakes that remind her of her childhood. She really wishes she could share them with Kelly, and then realizes that she could probably eat them in VR. Tilly asks who Kelly is and Alex says that Kelly is her smart, kind, wonderful, supportive girlfriend… who she totally snapped at this morning. 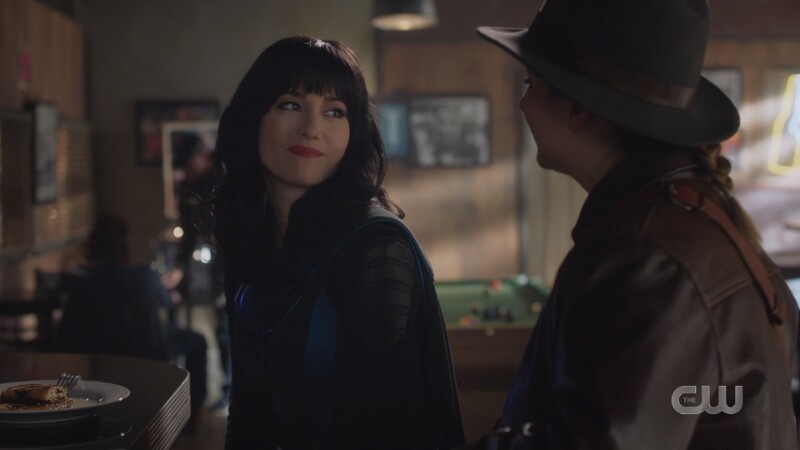 Tilly reassures her that they all have bad days, and Alex kind of word vomits all over her about her dad dying and how she loved being treated like an equal regarding the responsibility of protecting her family but in retrospect she’s realizing that being treated like an adult when you aren’t one might have felt flattering at the time, but the truth is, it’s not fair to the child in question. Sure as a kid you feel special, like maybe you’re smarter or more mature than the other kids your age when you’re asked to take care of your younger sister or protect a parent’s feelings or keep adult’s secrets, but the weight of that can crush a child’s spirit, and the toll it can take on your psyche can take years to reveal itself.

Alex thought that VR would feel like freedom, but the truth is her dad is still dead, and escaping here was fun, but it doesn’t take that pain away. She realizes that she just said all this to a relative stranger and says that she clearly has some things to work through. 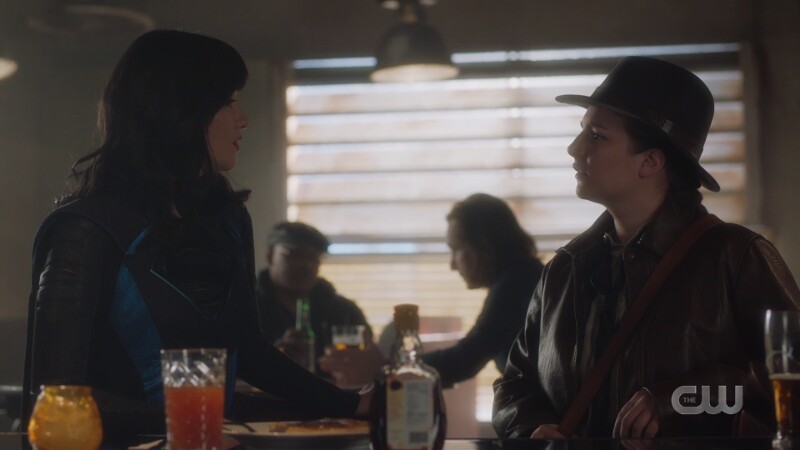 I feel like this screenshot is like if a bot read a thousand Supercorp fanfics and then tried to recreate it. So close, yet so far.

Alex apologizes for unloading and says she’s going to go back to the real world, but Tilly isn’t sure what that means. Alex, realizing something is off, calls Tilly “Bonnie” and asks about her sister Jill, but she doesn’t register any of that. She says her name is Tilly. Before Alex can wrap her head around what’s happening, she hears J’onn in her earpiece calling her back to the DEO and the bartender reassures her that he’ll take care of Tilly and SuperAlex instincts kick in, so she flies off.

In the real world, we see that Tilly’s Obsidian lenses have turned red, and she’s lying there clutching a picture of her and her sister when the Leviathan Woman comes to add her to her collection.

SuperAlex flies to the DEO, where broad strokes versions of J’onn, Brainy, and Nia await her help. 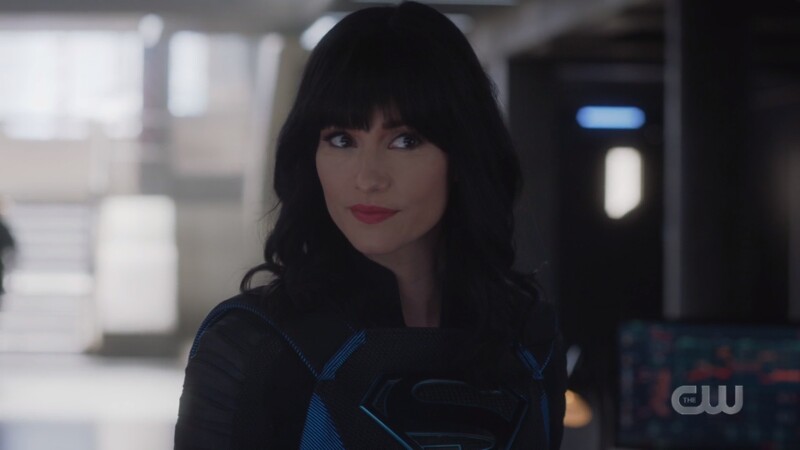 A girl who can’t even get her weapon to work could get used to this.

Hank Henshaw has kidnapped Kara, who is a mere human and who is struggling against ropes tying her to a chair, so Alex goes off to save her.

SuperAlex and Hank Henshaw fight, and Hank shoots her with Kryptonite and threatens her family, saying no one will be able to save her, but she delivers a classic Supergirl style line saying, “I don’t need anyone to save me. I am Supergirl.” She breaks free of her Kryptonite bindings and takes him down. As she cuffs him, she learns that Kara is safe; she saved the day.

In the real world, Kelly goes to find Willam and tells her about how dismissive Andrea was being. Kelly has taken it upon herself to pull 500 names of people who have been using their Obsidian lenses for 48 hours or more, and wants William’s help to do wellness checks on all of them. 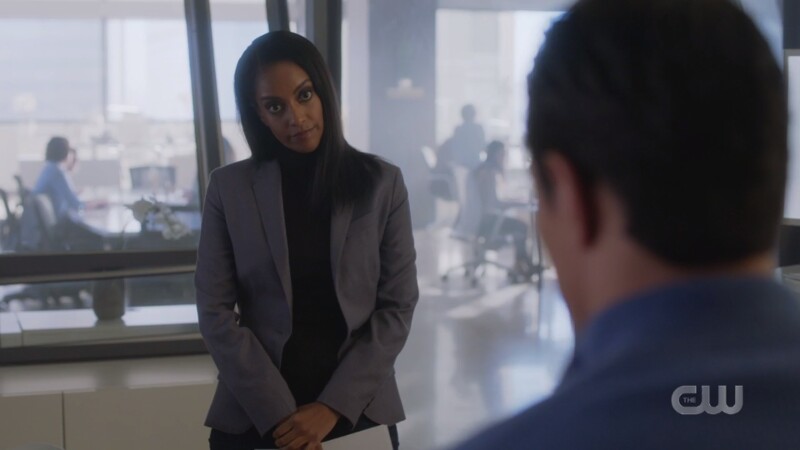 “If you have a contact at the NSA, now would be a good time to mention it. Not, say, 100 phone calls from now.”

At the VR DEO, SuperAlex feels good about saving the day, and J’onn tells her that Kara says it’s her turn to pick up dumplings, which also feels right… but something about all of this feels a little… off. She feels like she’s forgetting something important. But J’onn tells her everything is fine and they head off to karaoke night at the gaylien bar. Vita takes the mic from Abraham Lincoln and fries a heckler with her heat vision, and Alex’s body instinctively flinches, but when everyone just laughs, she starts to laugh too; our Alex is gone. This is her reality now. And she seems happy…

…but in the real world, her lenses are turning red. 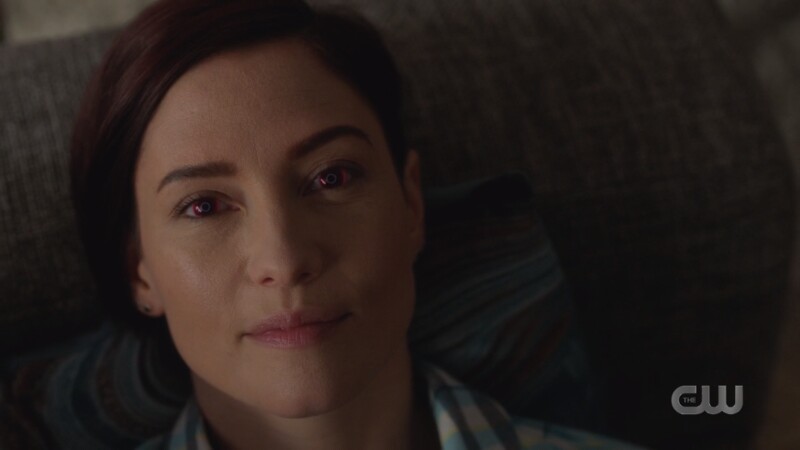 I don’t think this was a great week for them to air an ep about reality not feeling real and escapism becoming the new reality.

After calling 100 people, Kelly and William still haven’t found anyone stuck in their VR sim, and Alex isn’t texting Kelly back. Kelly thinks maybe Alex still needs space, and William suggests the very man thing to suggest, which is to ignore her need for space and go see her anyway. Normally I would be furious at such a suggestion, but since Kelly knows she’s on a time crunch re: getting Alex to change her mind about the service, and I know that Alex is in trouble, I’ll allow it.

Just a nerdy, TV-loving, Twitter-addicted Hufflepuff who loves reading, watching, and writing about stories. One part Kara Danvers, two parts Waverly Earp, a dash of Cosima and an extra helping of my own brand of weirdo.

Valerie has written 212 articles for us.