Today is a good day. Actually this whole week was a good week. Everyone should go out and buy a lottery ticket because we’re on a roll. Why are we so lucky? Well, for starters, I got this pair of shoes that I’ve only been coveting all summer for 30% off. Oh, and Proposition 8 was overturned. Elena Kagan was confirmed as a Supreme Court Justice today and Sarah is going to Lollapalooza, helping prove that everything can be just a little gayer if you try.

How would you feel about dating someone with the same name as you? I used to be entirely opposed to this idea until I saw Miss August. Phwoar! This week in style we talked about making skinny ties and in “entertainment,” that effing show still won’t go away. Luckily, Riese talked to Carly about how much of that lesbian executive realness really is real. You all had 178 feelings about Romi getting banged on TV and Riese recapped the whole episode for you because she is a masochist and a people-pleaser. jk, she’s perfect.

On On NSFW Sunday, All the Women Will Want Lesbian Sex:

The Horror! Award to rok and cassandra: 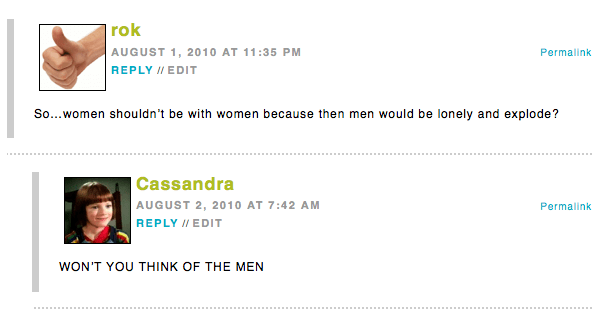 The Priorities Award to EV: “I WANNA SHOWER SO BADLY BUT I JUST KNOW THE MINUTE I HOP IN THE DECISION WILL BE RELEASED. GAHHH”

The Moses Award for Stone Tablet Speech to Meg: “My favorite part: “IT IS SO ORDERED. V. Walker layin the smackdown.”

The How Many Rat Tails Are In Minkerfoils? Award to Cassandra: “But it’s not really overturned because only 2% of California’s voters something something bigotry we aren’t doing lobotomies anymore what do you want something i forget”

The Unbridled Joy Award to madden: “fuckin right doggie!
long live the way America is supposed to be!!
A black President, 3 3 female S.C. justices, and EQUALITY!!!”

On Real L Word Episode 107 Recap: It’s My Party and I’ll Cry, Scream or Wrestle If I Want To:

The Priorities Award Part 2 to diane: “I can’t get past the fact that in Mikey’s email the word entrance is spelled ENTTRANCE!! Wondering if she actually sent that out to guests is probably going to keep me up all night.”

On Lesbian Stock Photography is Awkward, So Is This Song For Lindsay Lohan:

The Gay Eskimo Octopi Award to Texmez and Vikki: 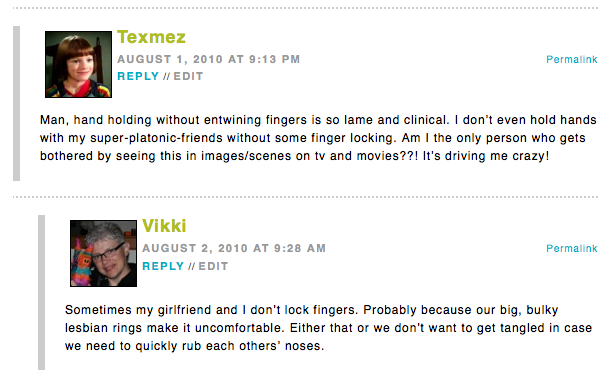 On Surprise! White Democrats With Kids Are Responsible for Passing Prop 8!:

The Vouch Away! Award to Danya: 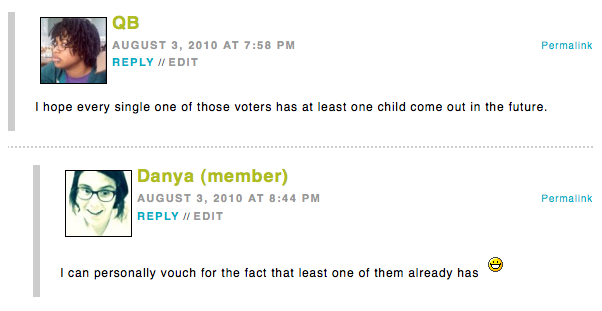 The Ignorance is Bliss Ignorance Award to Katie: “What IS it about the ubiquitous inverse relationship between gay-hating and spelling ability?
Do homophobes’ brains begin to short wire around age 7 or so when they are being taught basic grammar norms and spelling rules? Is it because the only piece of literature they’ve ever read is the Bible? (see my previous comments) Or is it that they are so overwhelmed by the conflicting feelings of sexual confusion and irrational hatred that their hands start to shake uncontrollably and they forget how to type?
The world will never know. Until then, at least we have Strunk & White on our side.
This all reminds me of a sign I saw during a protest in downtown LA. It read “Love not hate, how do you know your kids are straight?””

On Romi Tells Us What It’s Like to Be in Real L Word’s Lesbian Strap-On Sex Scene:

The Raise Your Hands, Bitches Award to Cassandra: “Like seriously, all the people being like “How could she not have noticed/remembered there was a camera there?!?!? She’s lying”, you’ve really never been that drunk? Especially in some emotional fucked-up girl-related situation? Things I have been drunk enough to not notice/care about include: STDs, other people in the room, furniture, walls with drops on the other side, where my skirt is, potential alcohol poisoning, and traffic. The only difference is that the shit I forgot/didn’t care about due to my friend mister vodka didn’t include some piece of paper I’d signed months previously while stone cold sober, and I had friends taking care of me instead of IFC cackling with delight that she had something juicy to air this week.”

The Power of the Philosopher’s Stone and Unintentional Reference to Mikey’s Sunglasses Award to Julie Goldman: “I am one of those judgmental douches who hasn’t even watched the episode — but really do I need to? Do I need to Blanche!? Haven’t I seen it all before in a little show called The Old L WORD and almost Every single Lesbian Movie – maybe it’s not real sex in the old show, and movies- but clearly we are obsessed with ourselves having sex, getting sex, making sex, proving ourselves as sexual objects, and predators and that we’re sooooo sexually free, and comfortable and confident, and we have sex too. and sex sex sex sex… it’s like we’re stuck in the 80′s when straight people made every movie about “getting laid” and “gettin’ chicks” and wearing sunglasses all the time… God, we’re cool.. It’s tired. Give us something else. Be something more. If I want to watch fucking I’ll watch porn – no. I won’t. I don’t know. I’ll just watch Harry Potter again. Where I feel safe.”