WELCOME TO THE POST-PROP-8-REPEAL WORLD. Are you married yet? No you’re not, because weddings won’t start til at least next week, maybe later depending on whether Judge Walker agrees to issue a stay on the ruling. But that’s okay, almost, because it means you have plenty of time to peruse the 138-page PDF of Judge Walker’s full decision! I mean, you should prepare for later today when our favorite Legal Eagle will have a full post for you explaining what happens next.

This may not sound convincing coming from the person who sunk literally days into recapping every day of the trial while it was happening, but um, it’s actually a really good read? It doesn’t take as long as you would think, and it’s double-spaced! But if you have better things do do, like celebratory fingerblasting, we understand.

But, just so you know, Rachel Maddow read the whole thing and REALLY LOVED IT: “I kid you not, is better than whatever novel you are currently reading and you should print it out and curl up with it instead, you will not be disappointed. It’s on the internet!”

I’ve picked out my top ten personal favorite moments from the full document, the ones that go the farthest towards repairing the psychological and emotional damage that the Yes on 8 campaign did to me as a person. There are actually a dizzying number of passages that made me want to do jazz hands or create origami flowers or sprinkle glitter on things because they made my  heart so happy – like honestly just the Word document that I copy/pasted parts into is at least 12 pages long – but these are special, these are like poetry. Like spoken word poetry performed by a pretty girl who plays acoustic guitar in a coffeeshop who you will later take home, and possibly even marry because YOU CAN DO THAT NOW. Anyways. Here are some words in a list.

In case you had somehow forgotten why we were doing this.

Because we’re not just pretty faces – our experts were hot shit, and we’re glad that someone noticed.

The only thing that got us through the hot hyperventilating self-medicating mess of the h8ers’ “expert witnesses” was the hope that maybe, someday, we would have confirmation from an objective third party that they were completely insane. Now that day has come, and maybe tonight we can sleep soundly without the Ambien even!

David Boies (B): You say here that if we lose Prop. 8 “they” will lose no time to push the gay agenda?
William Tam: Yes. They will.
David Boies: You said that you thought Prop. 8 would lead to legalizing prostitution. Why?
Tam: Measure K in San Francisco. I saw some homosexuals hanging around there.
Boies: You know that Measure K has nothing to do with Prop. 8.
Tam: Yes.
Boies: You told people that after Prop 8, legalizing sex with children will be next. That’s the homosexual agenda. Do you believe this?
Tam: Yes.
Boies: You said that if Prop. 8 passes, California will fall into Satan’s hands.
Tam: Yes, I said that. 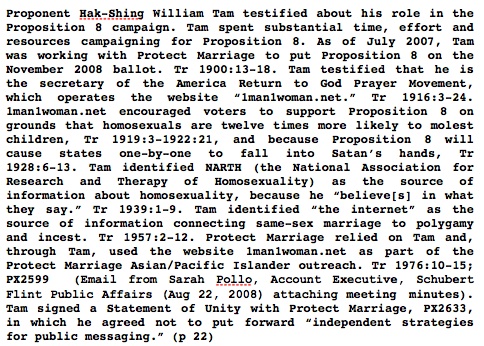 “Most people have to pay for therapy to talk about their feelings this much!” – Day 12 of the Prop 8 Recaps

“Astoundingly, Miller seems to be aware that DOMA is still in effect, and admits that he “would guess that the majority of the LGBT community would like that repealed.” Finger on the pulse, that one… I almost just stood up and applauded. It’s like he’s finally potty-trained.” — Day 10 of the Prop 8 Recaps 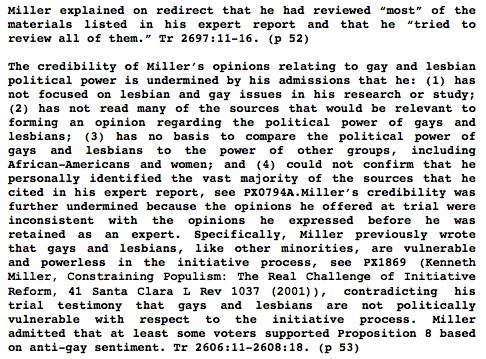 The Church of Latter-Day Saints: Protecting The Sanctity of Marriage Ever Since 1878 When Polygamy Became Illegal

5. The Okay Just The Way You Are Award:

The constant insidious suggestions that being gay is, you know, MADE UP, and wanting to marry someone of the same sex is an unfortunate side effect of not being able to just man up and enjoy a nice dick once in a while brought us traumatic flashbacks of coming out to our parents and made us want to set someone’s house on fire. But no fear, because Judge Walker wants the world to know that that shit is wack.

“Women have historically had many, many fewer choices in a lot of arenas, and sexuality is definitely one of them. When you say our sexuality is “affected by environmental factors,” do you just mean that a lot of decisions about our sexuality are made for us, depending on the environment we’re in? Like, depending on the part of the world you live in, you might very well be “straight” because you have to get married, and you have to marry a man.” –– Day 9 of the Prop 8 Recaps

6. The There’s Nothing Under The Bed Award:

After approximately eleven million months of ultraconservative paranoia attacks that our gay AIDS heroin-addicted feminazi communist virus is somehow going to get into the water, it actually almost brings us to tears to see someone in a position of power calmly and authoritatively refute the crazy myths that surrounded this case. 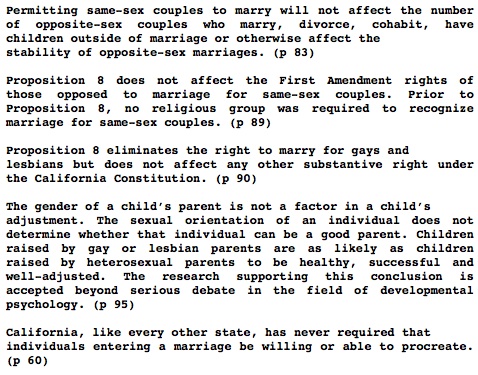 7. The I Dunno, This Just Made Me Feel Really Good Award:

After having it relentlessly pounded into all of our head that outlawing gay marriage is the only way to save the helpless naked infants of the world, it’s actually an enormous relief to have someone affirm that getting married is about, I dunno, the people getting married? The effect of the crazy sociopolitical Values Circus surrounding this issue succeeds in making it about everyone except the people it’s actually about – gay marriage is about the children, about the Pope, about imaginary princesses, about hypothetical polygamous societies in nameless African countries, but never about the people who want to get married. Except sometimes there’s a tiny clause in a legal decision that reminds you it is, and it’s so affirming you have to sit down and do some deep breathing, maybe call your mom and talk it out later.

9. The I Feel So Fucking Validated Right Now Award:

Hey you! Yes, you there! Do you frequently feel disenfranchised and mistreated by your own government and the people of your country? Has the phrase “second-class citizen” ever really resonated with you? Do you constantly experience prejudice and both individual and systemic discrimination because of your sexual orientation, gender identity or gender presentation, but have trouble getting people to sympathize with or even believe your experiences? MAYBE YOU WOULD LIKE TO SEE A LEGAL DOCUMENT THAT AFFIRMS YOUR FEELINGS, WITH ELEVEN DIFFERENT CLAUSES OF SUPPORTING EVIDENCE. 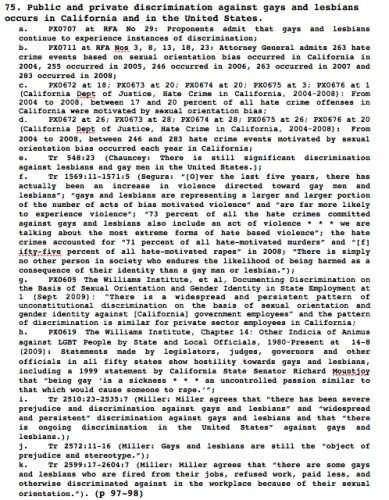