“I was shocked because it’s just amazing to see how much our school has changed in the past four years,” Senior Greta Melendez, Calabasas High Homecoming Queen, told KTLA-TV about the win she now shares with her girlfriend Lily Cohen as of last week. “When I was a freshman, we wouldn’t have gotten that reaction. I went through a lot of bullying.” 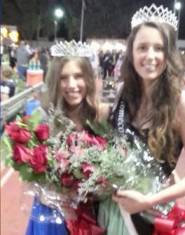 The election of Lily Cohen and Greta Melendez to their Homecoming Court is heartwarming, for sure, and adorable, absolutely. But it’s also exactly what Melendez told reporters — a really promising indicator of how quickly change is happening for The Younth. Things are changing so fast that in some places, transformation is evident even during the relatively short time period of high school matriculation. Melendez is the president of her school’s Gay Straight Alliance Club, and says she and Cohen owe their win to a diverse social group: “We think the reason that we were picked to win is because usually the homecoming king and queen are the most popular in their group of friends — whereas we are friends with all the little groups of people. They’ve never had someone to vote for.” The two girls are two of many LGBT students who have made headlines this month for being crowned on their Homecoming Courts.

At Waukengan High School in Illinois, Eric Irizarry and Ariana Reiff, both gay, were voted Homecoming Queen and King. Reiff was surprised mostly because “of the way I dress and the way I am. I’m not girly.” Irizarry, who is on the cheerleading and dance team, told The Sun-Times that “winning this makes me feel good, because it shows me that people care for me. They understand who I am, and they’re giving me respect. That makes me happy.” 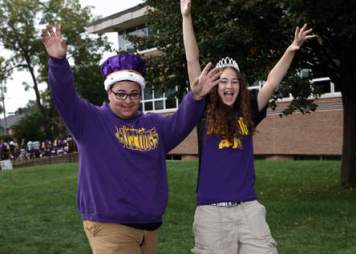 Like Melendez and Cohen, Irizarry and Reif say they’re not really popular, but are likeable kids with lots of friends. Reiff noted that “there are some people saying we shouldn’t have won, or that we won because we are gay, but I think our classmates chose us because they know us, and they chose us just as people.”

The Waukengan situation is especially interesting because in 2007 at the same high school, 17-year-olds Brandy Johnson and Lupe Silva sparked a minor controversy when they won the yearbook honor of “cutest couple” and the administration subsequently eliminated the category from the poll’s announced results. The school then changed course and decided to put their photo in the yearbook, and told the press their initial reluctance was due to one of the girl’s parents not wanting “attention drawn to it.” The girls who won said they won because they’re popular and have always been open about their relationship. Johnson told the paper, “our relationship inspired others to be open.” She appears to be correct about that.

Back to now:  In Portland, Oregon, Laurel Osborne and Sophia Scheoenfeld became their schools’ first lesbian couple to make homecoming court, which the school principal told the press “speaks volumes.” Schoenfeld noted that “at first, I didn’t think it was that big of a deal. I thought, ‘that’s cool.’ But there was an article written about it and it was really cool when I noticed how much of an impact it had. A lot of teachers came up to us and said, ‘Congratulations, it’s a really big step.'” A blogger at the local Willamette Week declared the nomination “another sign most millennials don’t think twice about sexual orientation.” Similar sentiments were shared by the principal at Waukegan, who when asked what the students’ inclusive choice says about their campus climate, said “the question is something adults are more likely to contemplate than teenagers.” 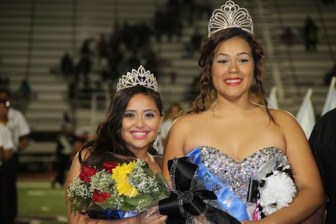 In Central Islip, Long Island, a lesbian student named Faith Shepard ran as homecoming king and won, choosing the “king” role apparently to “make a statement about gender roles and show solidarity with a transgender friend she met through facebook.” Her best friend Valerie Baez was voted queen. In Eagle Pass, Texas, 17-year-olds Eileen Hernandez and Jennifer Mijares were voted homecoming Queens. Hernandez and Mijares are not a couple, but Hernandez is a lesbian. “I was the gay one,” she told NBC Latino. “She was the straight one. She’s my ally.” Senior members of their Gay Straight Alliance had a dream of two Queens on the court, and with the GSA’s help, the two girls began campaigining. The effort was largely well-received, although there were some haters. Says Hernandez: “If one person would try bringing us down, so many others would say no, keep your head up, what you guys are doing is awesome.”

It’s not a secret that all LGBT teenagers face horrific levels of bullying and harassment in school, but GLSEN found in their 2011 National School Climate Survey that “transgender students faced the most hostile school climates” of all, with 80% of transgender students saying they felt unsafe at school. So it’s particularly promising that some high schools have elected transgender teenagers onto their homecoming court this year, too.

A New Hampshire high school voted Ray Ramsey, a transgender teenager, Homecoming King by a “landslide.” Reportedly he “took the royal title to the sound of thunderous applause and cheers from his friends and peers.” Furthermore, The Concord Monitor reported that after accepting the crown, Ramsey’s father took him by the shoulders and said, “I am so proud of you.” Ramsey’s nomination was garnered through LGBT student and ally group Tide Pride, as all his school’s Homecoming Court nominations function through student groups and organizations. 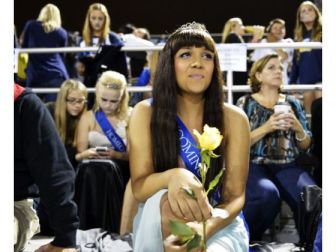 In September, transgender 16-year-old Cassidy Lynn Campbell was voted Homecoming Queen at Marina High School in Huntington Beach, California. She told The L.A Times that “[winning] would mean that the school recognizes me as the gender I always felt I was. But with all the attention, I realized it’s bigger than me. I’m doing this for the kids who can’t be themselves.” Despite being the popular choice and an ABC News video showing supportive classmates and students, things didn’t work out as well for Cassidy as they did for the cisgender women elected to prom court — according to The Huffington Post, Campbell uploaded a YouTube video (now removed) that night in which she said that people were being “so judgmental about it, and so hateful, and so mean and so negative.” Campbell, who received worldwide support, including a page set up for her by the National Center for Transgender Equality, and recently posed for the NO H8 campaign, continues building her following on YouTube and Instagram. She announced a few weeks ago that she’d dropped out of high school to pursue “amazing opportunities” and “bigger and better things.”

Reactions to LGBT students attending or being elected to royalty positions for Homecoming and Prom have historically served as cultural barometers. The most high-profile dance-related case in recent memory happened in 2010, when Constance McMillen was barred from attending prom because she wanted to bring her girlfriend. When Constance protested, the school cancelled prom altogether, thus leading to major backlash from other students.  The school was viscous and nasty, and students and parents conspired to send Constance and five other students (including her date and two kids with learning disabilities) to a fake prom while her classmates partied together, elsewhere. Constance quickly became an outspoken activist honored by GLAAD and given a large check from Ellen DeGeneres. She won her case against the school, prosecuted with the help of the ACLU. She also switched schools. McMillen set a precedent and it gave the issue massive visibility. Schools had to stand up and recognize that that style of discrimination would put them on an unflattering national stage. 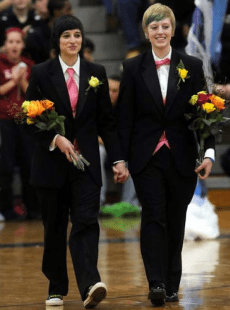 In 2011, lesbian couple Desiree Shelton and Sarah Lindstorm from the infamously gay-unfriendly Anoka-Hennepin School District in Minnesota took action against their high school when the school responded to their election to the Snow Days winter formal Royalty Court by canceling the royal court procession altogether. Obviously everybody knows that Homosexuals’ #1 Recruitment Tactic is holding hands in the gym while decked out in formalwear. Shelton and Lindstorm enlisted the help of The Southern Poverty Law center and The Nation Center for Lesbian Rights to negotiate with the school district. A subsequent mediation session led to favorable results, eventually determining that “any member of the royalty court would be allowed to bring any significant person in their life to walk with them during the procession.” The school also pledged to include gay-straight alliance clubs in event planning to ensure maximum inclusivity.

Those girls are not alone to take their right to wear fancy outfits while gay to federal court. In 2008, a federal court ordered Alabama’s Scottsboro High School to allow two female students to attend prom together, and even all the way back in 1980, high school senior Aaron Fricke‘s right to attend prom with his boyfriend was upheld by federal court. (However the student body still ensured Fricke had a lousy prom.)  In 2013, Stacy Dawson, a Missouri high school student, successfully challenged his school’s policy barring same-sex students from attending prom.

The outcome of most of these situations leans heavily on a number of factors — but it’s worth noting that a majority of these students are in their school’s LGBT student group. GLSEN has found that students in schools with GSAs are less likely to feel unsafe or be victimized at school and were more likely to report that staff intervened when homophobic shit went down. As you may remember, 2010 and 2011 but especially fall 2010 saw a sharp rise in press coverage of suicides by gay teenagers — and GLSEN noticed that 2011  was a positive turning point for many of their measured metrics. 2011 marked a statistically significant increase in number of GSAs, positive depictions of LGBT people in the curriculum; as well as a significant decrease in reported homophobic remarks as well as physical harassment, assault and victimization based on sexual orientation.

As aforementioned, Greta Melendez was bullied for being gay lost all her friends when she came out before her freshman year of high school. Her parents were always supportive, though, and are proud of their daughter. “We told our children to be who they are,” they told reporters. As Melendez says in this adorable video you’re gonna go watch right now, “the only thing we can do is just respect that, respect that okay that person’s different from me, but that’s okay.”