When something terrible happens to a child, we feel a need to identify and punish the person to blame. But when the terrible thing that happens is suicide, it becomes much more complicated — is there anyone in particular at fault? Or is it just a senseless tragedy? In Anoka-Hennepin school district, where nine high-school age kids have killed themselves in two years, the situation seems desperate enough that everyone wants someone to hold responsible. In a heartbreaking investigation into the district’s policies on bullying and gay teens, Rolling Stone seems to have come to a very emphatic conclusion that someone is to blame for the deaths of the kids in Anoka-Hennepin — in fact, their article is entitled “One Town’s War on Gay Teens.” 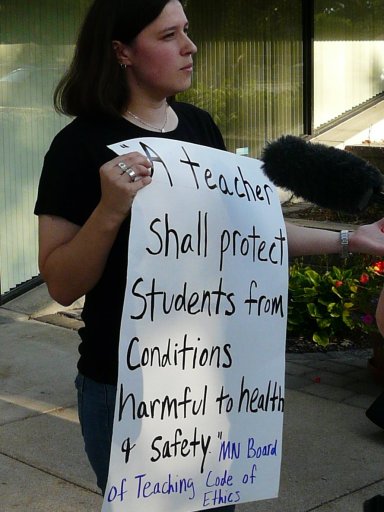 We’ve reported on Anoka-Hennepin (which is, coincidentally, Michele Bachmann’s home district) before; their reluctance to allow a GSA, their policy that teachers must remain “neutral” on the topic of sexual orientation, and the the lawsuit filed by five students to end the rule. But the Rolling Stone article reveals that while many teachers and school officials seem to have been ambivalent about their actions, the school district’s failure to serve the children that they’re called to care for was so extreme as to be unbelievable.

At Blaine High School, says alum Justin Anderson, “I would hear people calling people ‘fags’ all the time without it being addressed. Teachers just didn’t respond.” In Andover High School, when 10th-grader Sam Pinilla was pushed to the ground by three kids calling him a “faggot,” he saw a teacher nearby who did nothing to stop the assault. At Anoka High School, a 10th-grade girl became so upset at being mocked as a “lesbo” and a “sinner” – in earshot of teachers – that she complained to an associate principal, who counseled her to “lay low”; the girl would later attempt suicide. At Anoka Middle School for the Arts, after Kyle Rooker was urinated upon from above in a boys’ bathroom stall, an associate principal told him, “It was probably water.” Jackson Middle School seventh-grader Dylon Frei was passed notes saying, “Get out of this town, fag”; when a teacher intercepted one such note, she simply threw it away.

The official policy of the school district required that “Anoka-Hennepin staff, in the course of their professional duties, shall remain neutral on matters regarding sexual orientation including but not limited to student-led discussions.” But no one knew what it meant to remain “neutral” exactly — “No one could figure out what it meant. “What is ‘neutral’?” asks instructor Merrick-Lockett. “Teachers are constantly asking, ‘Do you think I could get in trouble for this? Could I get fired for that?'” And so when they couldn’t be sure whether saying something would mean losing their jobs, they chose to say nothing at all.  Not even “stop that,” or “leave her alone,” or “there’s nothing wrong with you.”

And while the fact that nine kids, four of whom were gay or teased for being gay, killed themselves in under two years should be cause for alarm, the fact is that isn’t the extent of it. Back in July of 2011, Anoka-Hennepin was described as a “suicide contagion” area because self-harm, depression and suicidal ideation seemed to spread among the children at school like an actual disease. These were kids who, gay or straight, had lost friends and peers at an age where in a perfect world they wouldn’t even understand what mortality really was yet. And whose community was watching it happen with their hands held up in the air, claiming that while it was all very sad it had nothing to do with them. In an environment where verbal abuse and assault of kids were normal and unobjectionable, suicide started to seem normal as well.

Every time a loudspeaker crackled in class, kids braced themselves for the feared preamble, “We’ve had a tragic loss.” Students spoke in hushed tones; some wept openly in the halls. “It had that feeling of a horror movie – everyone was talking about death,” says one 16-year-old student who broke down at Anoka High School one day and was carted off to a psychiatric hospital for suicidal ideation.Over the course of the 2010-2011 school year, 700 students were evaluated for serious mental-health issues, including hospitalizations for depression and suicide attempts. Kids flooded school counselors’ offices, which reported an explosion of children engaging in dangerous behaviors like cutting or asphyxiating each other in the “choking game.”

Anoka-Hennepin now has a GSA in every middle and high school, but the question of what the district’s official policy on discussions of homosexuality will be is still up in the air. The “neutrality” policy has fallen under harsh criticism, and the lawsuit filed by five Anoka-Hennepin students questions its legality. At one point the district attempted to replace it with the Controversial Topics Curriculum Policy, which required teachers to keep their personal opinions out of any classroom discussion of “controversial topics,” but this was roundly criticized by conservatives as being too liberal and by gay activists as leaving too much room for anti-gay propaganda. They are expected to go instead with the Respectful Learning Environment Curriculum Policy. The school board has yet to recognize or acknowledge the harm that the “neutrality policy” has caused. When a GSA meeting of 19 kids was polled, only two said they felt safe in school.

Teachers’ union president Blaha, who calls the district’s behavior throughout this ordeal “irrational,” speculates that the district’s stupefying denial is a reaction to the terrible notion that they might have played a part in children’s suffering, or even their deaths: “I think your mind just reels in the face of that stress and that horror. They just lost their way.” 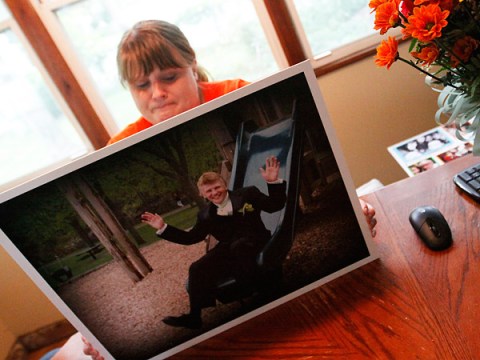 TAMMY AABERG, WITH A PHOTO OF HER SON JUSTIN (MPR Photo/Nikki Tundel)

Throughout the tragic narrative of one child after another being found dead in their homes, one common thread runs clear through it: the fear of backlash from conservative evangelical forces if anyone was thought to be showing “personal support for GLBT people.” It’s unclear what evangelical forces were at work, exactly — within Rolling Stone’s coverage, there’s mention of Barb Anderson, an anti-gay religious crusader; Exodus International, which ran a yearly “Day of Truth” about homosexuality in school; the Minnesota Family Council, who blamed gay kids’ suicide on the mental unhealthiness of a gay lifestyle; and the Parents Action League, who wrote Rolling Stone that “Because homosexual activists have hijacked and exploited teen suicides for their moral and political utility, much of society seems not to be looking closely and openly at all the possible causes of the tragedies,” including mental illness.” How did such a bizarre constellation of people become such a threat that children’s lives were lost so that they wouldn’t have to have their sensibilities offended? In light of the rash of suicides, teachers were advised that acceptably “neutral” responses to anti-gay slurs included “That language is unacceptable in this school,” or  “In this school we are required to welcome all people and to make them feel safe.” Who are we so afraid of that we can’t even say out loud that calling someone a dyke and suggesting they kill themselves is absolutely wrong? How can there be anything scarier or worse than Justin Aaberg’s mother breaking into her son’s bedroom to find he had hanged himself on his futon frame? How is it that there’s anything we’re not willing to do or any stand we’re not willing to take if we know that might be the consequence?

There are many factors that contribute to teen suicide, and there are a lot of reasons why the rate of attempted suicide for gay kids is more than twice that of straight ones. And problems of educational environments and how to protect kids from each other are never easy to solve. But the fact of the matter remains that a reactionary and faith-based community of extremists have managed to make the culture war around sexual orientation so fierce and so bloody that many people, in some places a majority of people, feel like they can’t risk taking a side in it. Not even when the lives of the children in their own communities, the children they are in part charged with caring for, are at stake. And the anti-gay extremists aren’t confined to Minnesota; the same narrative is playing out every time an adult role model is too scared to come out, or a company is afraid to support equality because they might suffer backlash. Aside from making our own lives miserable, anti-gay groups have succeeded in making it dangerous for other people to even want to help us. It took nine deaths, innumerable hospitalizations and the intervention of the Southern Poverty Law Center for even minor, incremental change in Anoka-Hennepin. What’s it going to take for the conversation to stop being about angering powerful bigots and start being about doing what’s right? Seventeen kids sitting on a linoleum floor who didn’t say a word when asked if they felt safe in school would like to know.