Things are changing. That’s all I could think while watching this new “Kids React To” video, where a group of children ages 5-13 are shown two of my favorite recent flash mob proposals (one + two) and then asked to talk about what they saw. Watching this gave me my daily dose of the warm-and-fuzzies, both because these kids are downright adorable and because they had some really smart, insightful things to say.

The metaphors these children use to explain why they believe in marriage equality are much more elaborate and sophisticated than I would have come up with when I was in elementary or middle school. I noted references to slavery, interracial marriage, the Civil Rights Movement, women’s suffrage and separation of church and state, especially from the older interviewees. The younger ones were almost completely on-board with the ability to love whomever simply for freedom’s sake. The adorably confused Mr. Evil Eyebrows was the main exception here, but even he wasn’t sure what was so bad about gay people getting married, just repeating over and over that “gay is bad for you.”

Some of these kids have clearly thought about gay people before and are probably borrowing language overheard from adults — Which is a good thing! Let’s teach equality to our children! — but even those who are baffled by the “boy proposing to a boy?!” quickly assured the hosts that people should be free to love whomever they want. Of course, that’s no reason not to throw some sass in the direction of the anti-marriage-equality crowd, as 13-year-old twins Megan and Shannon did, instantly becoming my new personal heroes: 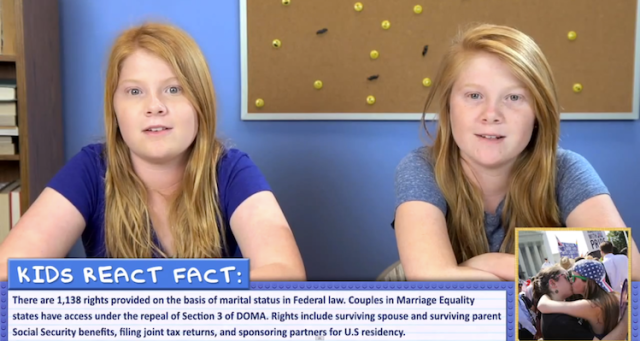