We’re calling this one now: this generation will be known as the Generation of Gay Proms. Constance McMillen will go down in history as ushering in an era of national controversy over tiaras and limo rentals.

This week our gaze turns to Minnesota, where there is not technically a prom, but instead “Snow Days,” basically a winter formal. Two lesbians were successfully voted as Snow Days royalty, only to have their high school suddenly change the protocol so that they couldn’t walk into the coronation together like a couple. Now everyone on “prom” court is required to walk in singly instead of two by two as has been done at Champlin Park High School, because the school administration feels that “this decision is more respectful for all students.” Specifically, the [presumable majority of] students who elected them to that position in the first place. The exact wording of the school district, in an email sent to the staff:

There have been some rumors about our upcoming Snow Days Pep Fest on Monday. Let me provide you with accurate information. Our goal is to make the event as positive for everyone involved – our students, members of Snow Days royalty, our staff and parents. There is some concern that we will not let members of royalty walk as couples during the coronation ceremony. Please remember that students were nominated as individuals, not as couples – therefore we will present them to you and honor them as individuals during the Pep Fest. This has been a year with some changes to CPHS traditions, so as we reviewed Snow Days, we decided this was a better plan that honors and respects every student. 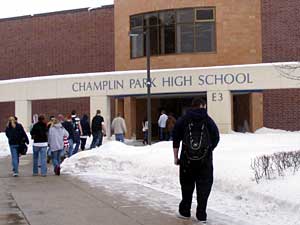 If we were to, hypothetically, devise a patterned analysis of schools who really really don’t want queer kids to turn school dances gay, based on what we’ve seen so far, it seems like it would look something like this:

+ culture of homophobia and bullying (Constance was bullied and ostracized by her peers, the Champlin Park High School had an incident where it took down posters advertising an LGBT counseling hotline because parents feared it might “indoctrinate” students)

+ reaction clearly based on discrimination and paranoia w/r/t gay people, but advertised as longstanding school policy

+ punishing all students because of the few gay ones, inciting resentment and discord

+ refusing to speak with or respond to the students’ or their families’ concerns, and instead having to be dealt with through major lawsuits

+ huge amounts of media coverage, due to America’s bizarre obsession with prom, ultimately resulting in terrible press for the school and damage and embarrassment to the kids involved (see a local news story on the decision with video)

Champlin Park is perhaps a little more extreme than the Itawamba district where Constance McMillen’s prom controversy occurred; even before this case, it’s had a “neutrality policy” in place that bars any discussion of queer topics in the classroom, and has had more than nine suicides in the entire district in the past 18 months. It’s unclear (as it always is with suicide) what the underlying cause was, but some LGBT advocates have blamed homophobic bullying. I don’t know whether it makes it worse or better that, since these two girls were voted by their classmates, the brunt of the homophobia and gay panic seems to be on the shoulders of the administration. It’s heartening w/r/t our youth, but sickening to think that adults would be so steeped in their own bigotry that they would hurt the children that they’re supposed to be caring for. In any case, Champlin Park does fit the profile in this regard: they’re going to be taken to court by The Southern Poverty Law Center, the National Center for Lesbian Rights, and Faegre & Benson, LLP if they don’t change their minds. The letter sent by the SPLC to the school district tells a slightly different story that’s not about “respecting all students:”

In this case, it was known to staff organizers and school administrators that Desiree and Sarah intended to walk together in order to make a statement about their relationship and their sexual orientation. They told the school ofﬁcials that two of their male friends on the court had agreed to walk together, so no student would have to walk alone. Nevertheless, CPHS told Desiree and Sarah they could not walk together, solely because both girls are of the same sex. When Desiree and Sarah persisted in their request, CPHS responded by informing them on Thursday, January 27, 2011, that it would cancel the traditional processional part of the assembly entirely and the Pep Fest and Coronation would begin with the student royalty already seated… We further request that the District make clear to Principal George and to all District staff that it is unlawful and a violation of the First Amendment for schools to censor student expression of their sexual orientation, gender identity, or support for lesbian, gay, bisexual, and transgender (LGBT) rights.

So far we have no public statement from these girls or their families, and if the school district has indeed changed their decision to the satisfaction of the SPLC by the appointed time, we haven’t heard about it. Their official position is now that no one will be walking at all; the entire royal court will instead be seated for the duration of the ceremony, which still seems like an obviously discriminatory situation which  works for no one. So it looks like another high-profile prom court case is on the horizon, another chance for a publicly funded American institution to redeem itself but probably fall short, and another opportunity for the rest of us to shake our heads and wonder how we live like this.