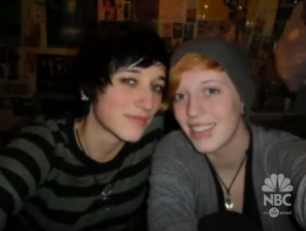 The Windy City Times has published an essay by Desiree Shelton, one of the two girls who took action against their high school in Minnesota’s Anoka-Hennepin School District when, after being elected to royalty court for an important Snow Days Dance Related Event and deciding to walk together as a couple, the school decided to cancel the procession altogether rather than let the girls be all gay in front of everyone. They fought back and got to walk and got a standing ovation.

Shelton writes that “everyone seems to have a strong opinion” about the controversy and that she wants to explain why “this was more than a high school Pep Fest—it was about basic rights and the ongoing fight for equality that seems so hard to win, even in 2011.” She remembers how, after learning that she and Sarah had been elected to the royalty court, some friends urged them to walk together and two straight male friends volunteered to walk with each other so the girls could do so as well:

Sarah and I were really looking forward to being able to share this occasion together and also thought this would be a great opportunity to send a positive message to the lesbian, gay, bisexual, and transgender community and its allies ( after all the bad media the school had been getting about the gay-related suicides ) by showing other students that LGBT students can express ourselves, defy gender roles, and still be treated as equal to other students, and not feel ashamed or hide “in the closet” for fear of harassment. We felt that even something as small as having two lesbians walk in the procession together could have a big impact on other LGBT students. 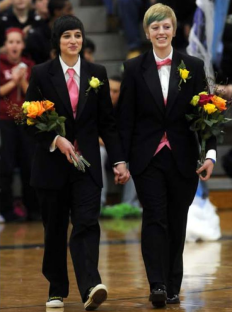 Desiree recounts how after the tirade of excuses — like “the tradition was one boy and one girl” and “it could make some kids uncomfortable” — Sarah and Desiree approached the principal again, this time with some supportive teachers. The principal thanked them for their concerns, said he’d bring it to the school board, and meet again the next day. Sarah and Desiree were pissed when they learned that instead the school had just decided to make everyone walk individually instead of being paired up which eventually changed to not having anyone walk in the procession at all!

“What kind of message was that going to send to LGBT students and allies, and the rest of the student body—that we didn’t deserve to be treated as equally as everyone else? That is blatant discrimination… it was also denying us the chance to send out a positive message to the LGBT students and allies, which was the main reason I wanted to participate in the Snow Days royalty court.

I couldn’t just sit back and let that happen. I wanted to do my part for the LGBT rights movement, no matter how small. Also, they were getting rid of a part of the Pep Fest that I know a lot of the other people on the royalty court were looking forward to.”

The girls were then put in touch with The National Center for Lesbian Rights ( NCLR ) and the Southern Poverty Law Center ( SPLC ) who sent a letter to the school asking that they change the procession. Desiree and Sarah were surprised by the results of their subsequent mediation session:

“…the school district worked with us—with the help of the judge—to come up with the solution that any member of the royalty court would be allowed to bring any significant person in their life to walk with them during the procession. Not only could Sarah and I could walk together, but our friend Chelsea could walk with her girlfriend, and any other member of the court could bring a boyfriend/girlfriend/best friend/parent, etc., to share the experience with them. How could anyone be upset with that? On top of that, the school district also agreed to include gay-straight alliance clubs and other groups in event planning to make sure that all school events were inclusive to all students and that no one was left out. The outcome of the mediation session was absolutely phenomenal and was everything we asked for, and more.”

“One thing I would really like people to realize is that this was never about getting attention. This was only about Sarah and I wanting to share a special event together, and about showing other LGBT kids that they don’t have to be afraid to be who they are because they are not alone. We were denied a privilege that straight couples have always received, which is not only against the law but also was sending a very hurtful message to LGBT students that we are not equal to our heterosexual peers. Sarah and I are human beings who deserve the same respect, rights, and opportunities as everyone else, and when push came to shove, we were ready to shove right back. We stood up for something we believe in, and out of that came an amazing change for the school district that I hope will continue to change a lot of things for LGBT students in the future.”

The girls recently spoke to the National Gay and Lesbian Task Force at the Creating Change Conference:

It’s a shame that standing up for your rights as queer women is so often misinterpreted or default-attributed to “wanting attention.” This epithet also seems to fall most often upon women and gay men — straight men, it seems, are expected to demand and receive attention and to respond offensively when deserved attention is withheld. In any event, just like Constance McMillen, who was accused of getting the ACLU involved in her decision to cancel prom for attention, that wasn’t — and rarely is — the goal. We’re lucky to have women like Desiree and Sarah who aren’t afraid to speak up and are prepared to pave the way for, ideally, a speedier track towards acceptance of LGBTQ students by classmates and administrators alike.