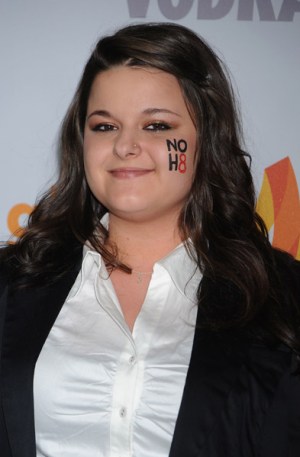 A “precedent-setting lawsuit” was settled today in the case of 18-year-old high school student
Constance McMillen vs. The Itawamba County School District.

As reported by The ACLU:

As set forth in documents filed in court today, school officials agreed to implement a policy banning discrimination or harassment on the basis of sexual orientation and gender identity, the first policy to do so at a public school in the state of Mississippi. The school also agreed to pay McMillen $35,000 in damages and pay for McMillen’s attorneys’ fees.

McMillen’s story began in March, when school officials turned down Constance’s request to bring her girlfriend to prom and wear a tux. Constance called the ACLU, the ACLU urged school officials to reverse the policy both on McMillan’s choice of date and attire. Simple enough, right? Apparently NOT AS SIMPLE AS JUST CANCELING PROM ALTOGETHER! The school said the parents & kids were welcome to create their own private prom if they wanted to.

The ACLU then officially filed suit against the school district, asking the judge to order the school to reverse its decision. Obviously the students at Itawamba blamed Constance, not the school, for the whole thing and pretty much made her life a living hell. Then the judge ruled that the school had violated Constance’s rights, but could not force the school to hold a prom since prom isn’t anybody’s constitutional right. The students, teachers and school officials then conspired to schedule a “decoy” prom which Constance and five other kids went to while the rest of her senior class held their own private prom 30 miles away. The students “defended” themselves, saying that Constance was just doing it for attention and besides she was really annoying.

Unsurprisingly, Constance opted to get the hell out of Dodge, transferring to a new high school where she wouldn’t be tormented every day by her asshole classmates. She then filed suit against Itawamba school for the public humiliation she suffered.

Obviously only good part of this whole thing (besides Constance getting to be on Ellen and go to the GLAAD Awards and marshall the NY Pride Parade and go to special queer proms) was our super Prom Gallery, which we created to celebrate what apparently so many people are very afraid of – how cute two girls look when they go to prom together!

Well, that was the best part UNTIL TODAY.

“Constance went through a great deal of harassment and humiliation simply for standing up for her rights, and she should be proud of what she has accomplished,” said Christine P. Sun, senior counsel with the ACLU Lesbian, Gay, Bisexual and Transgender Project. “Thanks to her bravery, we now not only have a federal court precedent that can be used to protect the rights of students all over the country to bring the date they want to their proms, but we also have the first school anti-discrimination policy of its kind in Mississippi.”

In addition to today’s legal judgment against the school, an earlier ruling in the case set an important precedent that will help prevent other students from suffering the kind of discrimination McMillen experienced. In March, the U.S. District Court for the Northern District of Mississippi issued a ruling in McMillen’s case that school officials violated McMillen’s First Amendment rights when it canceled the high school prom rather than let McMillen attend with her girlfriend and wear a tuxedo.

“We’re pleased that the school district agreed to be held liable for violating Constance’s rights. Now Constance can move on with her life and Itawamba school officials can show the world that they have learned a lesson about equal treatment for all students,” said Kristy L. Bennett, co-counsel on McMillen’s case. “This has been about much more than just the prom all along – it’s about all of our young people deserving to be treated fairly by the schools we trust to take care of them.”

“We hope this judgment sends a message to schools that they cannot get away with discriminating against lesbian, gay, bisexual and transgender students. LGBT youth just want to be treated like their peers and do all the normal high school things, like going to the prom with the date they choose,” said Bear Atwood, Interim Legal Director at the ACLU of Mississippi. “We’re very proud of Constance for standing up not just for her rights but the rights of LGBT students everywhere.”

REF-71: Supreme Court Said Protect Marriage Washington Must Release Ref 71’s Names. Oh, This Isn’t Over? : Having lost a broad argument at the U.S. Supreme Court, the conservative group trying to shield the names of people who signed petitions seeking to overturn a new gay rights law in Washington are taking their case back to a lower court.

DAN CHOI: Dan Choi got arrested again, this time in Las Vegas. Choi was there protesting U.S. Senate Majority Leader Harry Reid’s perceived inaction on the federal Employment Non-Discrimination Act. Remember when Rachel wrote Is There a “Right Way” to be a Gay Activist? On Dan Choi, Obama’s Alliance & Civil Disobedience? That was good.