It’s time for another rundown of what happened on queer teevee this week! First, though: Kayla recapped Kat saying she’s queer two entire times on The Bold Type this week; we made a list of the best dykes on bikes on TV; and we published another TV Team roundtable, this one about our favorite baby gays! Here’s what else happened in the wide world.

Last we checked in with Quiet Ann, she was living her best life… she had her girl on her arm and her friends by her side. It all came together a little too quickly — Desna’s understanding and Arlene’s forgiveness — but because Ann’s wanted both those things for so long, she doesn’t dare question it. She should have because, of course, this week, all the pieces of Ann’s happiness start to unravel.

But first: with the remnants of her wedding dress still smoldering from the fire, a livid Desna convenes the crew at Polly’s to share her news and concoct a plan for revenge. Turns out, her boss and her fiancé — both of whom she’d pledged her fidelity — have been hooking up and plotting against her this entire time. As Desna cycles through fantasies of how she could kill Zlata and Ruval, Ann reminds Desna that she’s no killer. Uncle Daddy interjects and offers up a warehouse that houses Ruval’s drug operation and the plan is set: they’re going to burn it all down. 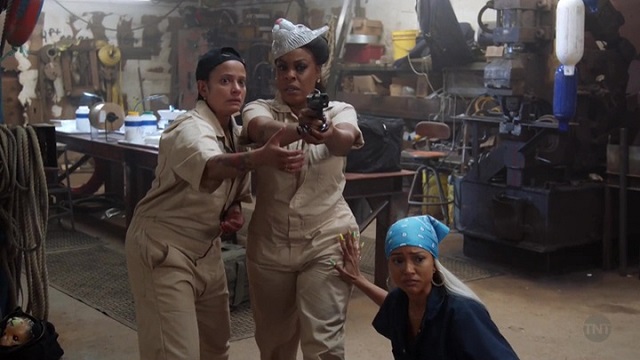 I’m skeptical already. How is it that these five women who have spent their entire lives making a way out of no way, end up listening to the only man in the room? Ann shares my skepticism and, even as they make their way to the warehouse, she urges Desna to reconsider. Desna stands firm, though, and they all don animal masks and break into the warehouse, as “In the Jungle” plays hilariously in the background. Once inside, Virgina and Ann douse the place with gasoline but Uncle Daddy calls an audible: instead of torching the place, they’re going to steal all the cocaine.

One thing we’ve learned about Ann this season is even though she’s quiet, she still wants to be heard, especially by Desna. But when Ann protests the change of plans, Desna shuts her down, hard. Ann obliges in the moment but when they return to the salon, the fight continues. Desna tosses out her trump card — this is her crew so Ann needs to stand down — and it’s enough for Ann to finally throw in the towel: she’s out.

“Ya know, there’s a part of you that just loves the drama, right? Living on the edge. But I’m not wearing an orange jumpsuit again,” Ann says, just before she leaves her friends behind. “Not ever.” 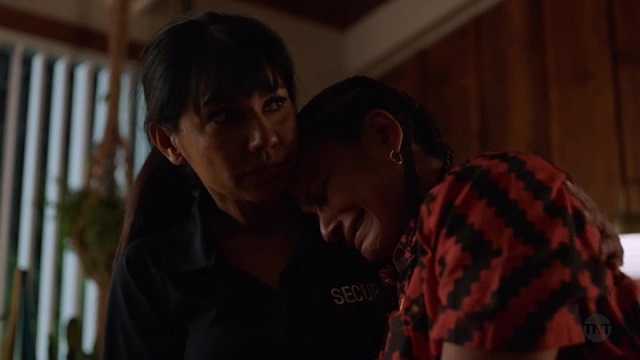 Real tears, fake uniform…but is it a fake relationship?

As she drives home, Ann seeks solace in the one piece of comfort she has left: her girlfriend, Arlene. Unbeknownst to Ann, Arlene’s been keeping busy, still working for the trying to get the goods on the Russians as a member of the Sarasota PD. When the pair reunite, Ann can barely hold it together and explains that she has to escape her work environment — she never wanted this, she says — before collapsing in tears on Arlene’s shoulder.

It’s hard to know what’s going on with Arlene. She’s lying to Ann, that much is clear, but the intimate moments between the couple seem genuine. When she promises to revisit fostering children with Ann in a few months or when she strokes her girlfriend’s back as she cries, it all feels very real…and yet, when she shows up at Desna’s house and arrests her for money laundering and fraud, you can’t imagine her being able to be a girlfriend to Ann and a cop. 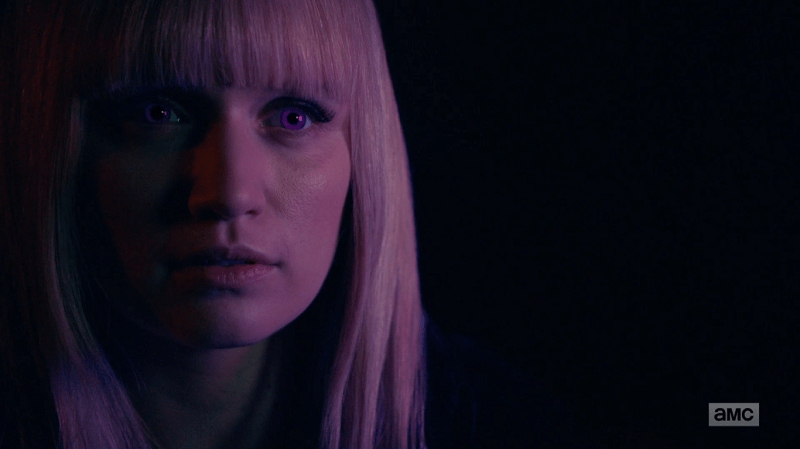 Purple is my favorite color, so I am taking this as Niska telling me she loves me back.

When talking about this season of Humans, Riese articulated what I had been thinking without having words for all season: Humans Season Three did what Westworld boldly moved into in its second season, and pulled away from individual stories to tell a big-picture story. This season was about all the synths becoming conscious and the repercussions that followed. It was about a fight for equal rights, and called into question what the definition of “humanity” even really was, with a lot of strong parallels for things happening and arguments being had in our real life world. Astrid was in the hospital for most of the season, which was fine only because it meant she was safe. She called our girl Niska a few times and always told her she loved her, which fueled Niska on her one-synth journey to find the Synth Who Sleeps.

One side-note before I talk about Niska’s mission, I liked that we saw so much of Mia this season. Also, Laura’s decision in episode six made me wonder if I could ever fully be on her side again. And Sophie continues to be the best of us.

Okay, back to Niska. For most of the season, I was just frustrated that her story seemed disconnected from everyone else’s, even though I doubted she would have fared well in the tension-fraught camps the conscious synths were being forced to inhabit, and her wanted face was too recognizable to even try to blend in with the humans. But then her journey brings her to the Synth Who Sleeps, which has the body of Odi, the on-the-fritz synth from seasons past, who has been imbued with the consciousness of V, the super-conscious AI who learned at a terrifying speed created by Dr. Morrow last season. They have reached a new plane of existence, basically, and think Niska is ready to join them in enlightenment.

So Niska returns to her family, green eyes turned violet, all-knowing, and all-wonderful. I can’t help but wonder how much this would change things (esp between her and her human girlfriend Astrid) for the next season. As a green-eyed synth, she was made in the image of humans, and able to relate to Astrid because of it. But now she’s…more. Does that make her less human? Will it make her less able to relate to her non-synth family? Or will it only increase her empathy and humanity? Only time will tell, truly. 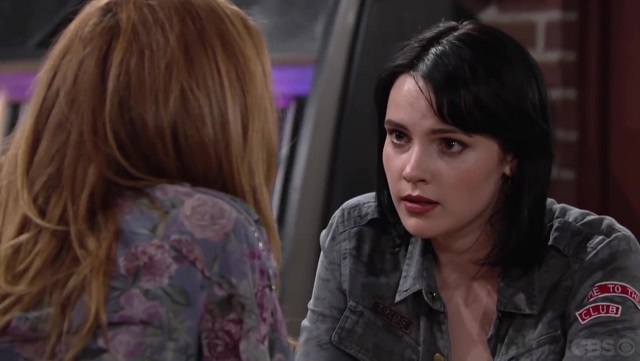 The Young & the Restless

This week in Genoa City certainly got me in my feelings and, frankly, I’m still not over it. Every day this week, there was something…some ups — Mariah and Hilary cementing their friendship, Hilary and Devon getting married in the ICU, Mariah committing to Tessa — and a lot of downs — Mariah’s emotional “GC Buzz” monologue, Hilary dying and the tearful break-up/goodbye between Mariah and Tessa. It was just too much.

I’m happy to know that Tessa will be back soon enough, partially because I want to see Tessa support Mariah through her loss, but mostly because Cait Fairbanks is really doing her best work. — Natalie

I adore Lexi Ainsworth and she earned that Emmy for telling the story of a girl who discovers her sexuality after falling for her married lesbian English professor. But after what this show did to the character and her relationship with Parker, I definitely rolled my eyes hard at the news that Ainsworth would soon be returning to Port Charles. I am not getting my hopes up for this one. — Natalie

I’m here once again to tell you that I haven’t watched last night’s episode (the only show that being on the East Coast sucks for) but that last week’s episode was VERY GAY. Finally, finally, finally, we have official, out-loud confirmation that Beau likes the ladies. This came in the form of her hiring a pretty elven sex worker to keep her company one night at a tavern to help distract her from the trauma they had just experienced. Also at the Critical Role panel at San Diego Comic Con, Marisha confirmed that Beau is trying to flirt with Yasha but is also hesitant because office romances can be awkward! — Valerie Anne

Maggie still doesn’t have enough to do, but she does have more to do than Josh, who has only appeared in this season to walk into rooms and say hello and walk out of rooms. This week Maggie found out she’d been “collected” by the couple that loved her art at the Whitney last week. They bought everything and put it on storage, as an investment. They invited her to their Christmas party and she said yes, but when she got there and found out what their deal was, she gave them back their money and their jewelry and told them to fuck off. It was pretty great. Also great: Sutton Foster performing the yodeling song from The Sound of Music. She kissed Charles in the end and he was like, “I don’t care anymore” and I was like, “Yeah, I never cared about this part.” — Heather Hogan

I have good news, and I have bad news. The good news is that after a season and half drought, Queen Sugar finally remembered Nova’s bisexuality. The bad news is that it happens right before Nova confesses to her sister that she’s kissed and basically been dating her ex-boyfriend. Charley asks Nova, “who’s the lucky guy or girl?” and my heart dropped. I’ve been begging the show forever to bring Nova’s queerness back in the show, but not like this. My God, NOT LIKE THIS.

I suppose there’s something to be said about the fact that at least Nova knows it’s wrong to be dating her sisters ex? She offers up a weak, “I will walk away if you want me to” to Charley. But honestly, the character assassination that’s been happening to Nova over the last year and a half has left my heart hardened. Every time I think I see a glimmer of woman who I first loved, Queen Sugar yanks her away from me. It’s devastating. And it takes away from the other, many things that the show continues to get right in regards to its representations of blackness and race.

In the episode’s closing scene, Charley withers the pompous ass known as Remy with the reminder that nothing will get between her and her sister. “Nova and I are forever. We’re family. But you, you will always be fleeting.” Daaaaaaaamn Charley! Now if only your sister could muster up the same backbone. — Carmen