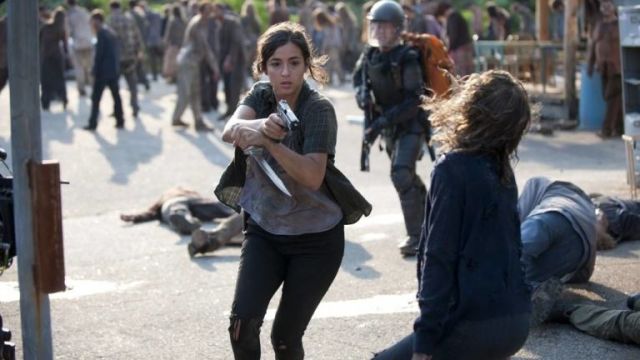 The Walking Dead went from being a pretty OK show about zombies to an absolutely terrible show about a bunch of sweaty men who are constantly trying to acquire more guns, and it happened so gradually that I didn’t even notice until it was too late. Every week I watch this show so I can report back to Heather whether or not Tara’s going to die, because of course she’s going to die! She’s a completely disposable fringe character who’s had just about zero storyline ever since they shot her girlfriend in the eye with an arrow. I thought maybe she might be the last queer woman left alive, but then last season she met an entire lesbian village and sold them out so Rick could steal all their guns. Tara, I am going to enjoy watching you get ripped apart by zombies, and then hopefully I am going to stop watching this show. 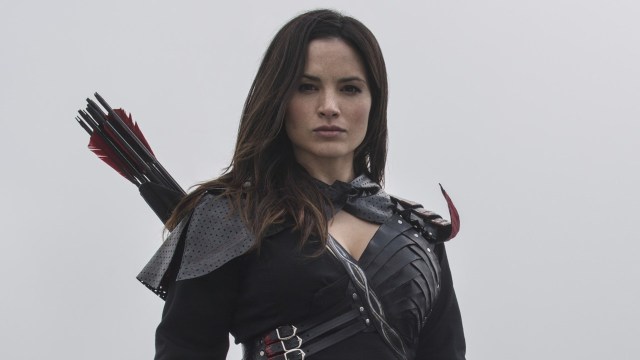 NYSSA WAS DONE SO WRONG, Y’ALL. She was one of the strongest characters left on Arrow, and when everyone was on an island that blew up last year, fates were doled out to everyone but her. Some people died, some were put in comas, some escaped…and no one will tell me what happened to Nyssa. I can’t tell if they’re saving “what happened to Nyssa” as a Big Reveal, or if they decided probably she’s dead but are like, “It doesn’t count as burying your gay if you just…never mention them again.” DON’T GHOST YOUR GAYS, EITHER. 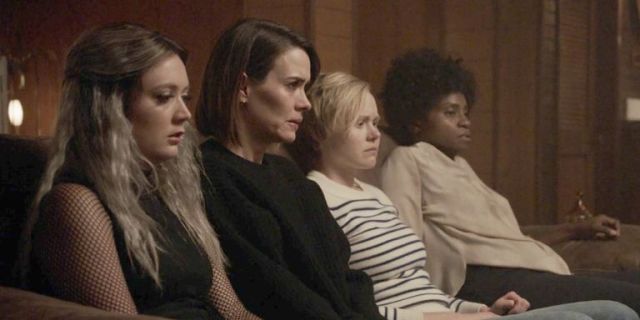 I don’t know if I’ll ever forgive Sarah Paulson for being so great that she got me to watch the entire season of AHS: Cult despite it being the bane of my existence the entire time. Also fuck Ryan Murphy for always having so many queer women on shows that make me want to carve my own eyeballs out. What’s a queer TV addict to do?! 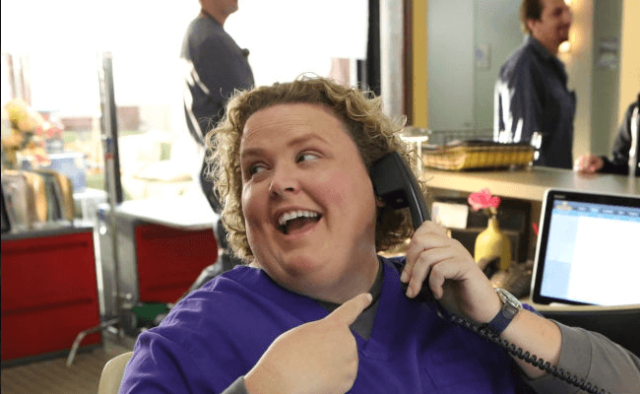 Would I have watched the final season of The Mindy Project in its entirety if I wasn’t covering it for work? Probably not! It was bad! The show has never been good with respect to its queer characters, whose queerness only serves as a punchline most of the time. The final season, in particular, only acknowledged the fact that Colette is a lesbian when it was making a lazy joke about it. It became extremely tiresome extremely fast. 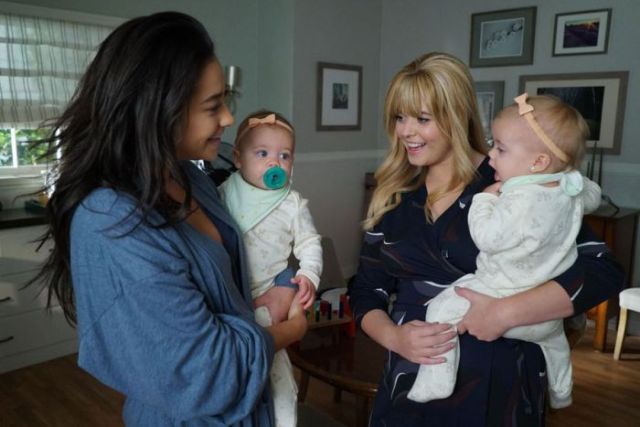 If you’d told me Ali and Emily were going to end up together in the early days of this show I would have thrown them a wedding shower in my own home, but the way it all played out was so stupid and terrible. What happened was Emily donated her eggs to get money to go to college and A stole those eggs and gave them to Alison’s fake-doctor-husband who fertilized them with a psycho’s sperm and then raped and impregnated Alison with them while she was drugged up and tied to a bed and in his imaginary psychiatric hospital and Alison and Emily got married and had those babies and lived happily ever after. Isn’t that sweet? 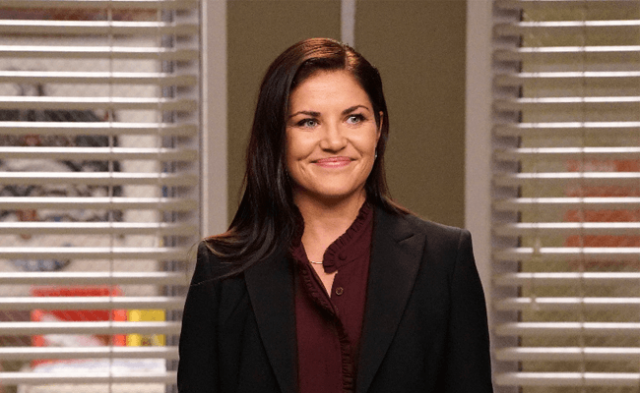 Can we be honest with each other? I struggled coming up with a “worst” character. Overall, I think 2017 was pretty solid for queer television representation and a lot of fun to watch.

That said, there’s still a lot of room to grow for our representation on television. My #1 hope for 2018 is that we get a trans queer regular character somewhere (played by a trans actor, of course). I think that representation for queer women of color was plentiful this year, but uneven in execution. Kat Edison from The Bold Type got a beautiful, bold love story but she wasn’t written in ways that felt authentic from black lens. Nova Bordelon remains one of the best written black activists on television, but her queerness was an afterthought in Queen Sugar’s second season. I’m still not over casting a non-Latina actress in the role of Maggie Sawyer on Supergirl, and then deciding continue to portraying her as Latina on screen anyway. Intersectionality is vital when writing queer women of color on television, because these layers are a permanent reality in the off-screen lives of queer women of color. We don’t get to “be a person of color today” or “a queer person tomorrow”. We are all of ourselves, constantly. Television needs to catch up to that.

Ultimately though, I looked in my heart of hearts and went with Eliza Minnick. Why? Because she was 100%, delightfully, enjoyably, purposefully The Worst (TM).

There was once a time, not very long ago, that if a new lesbian or queer character appeared on television, then I felt obligated to defend her. But, Eliza was a villain. She was cocky and arrogant and wholly unlikeable She came to Grey’s Anatomy with the goal of dethroning Chief Webber (and yes, he will always be Chief Webber to me)! Then in the season 13 finale, like any good television villain, she was ceremonially defeated. It was blissfully cathartic.

I loved every moment that I hated her. 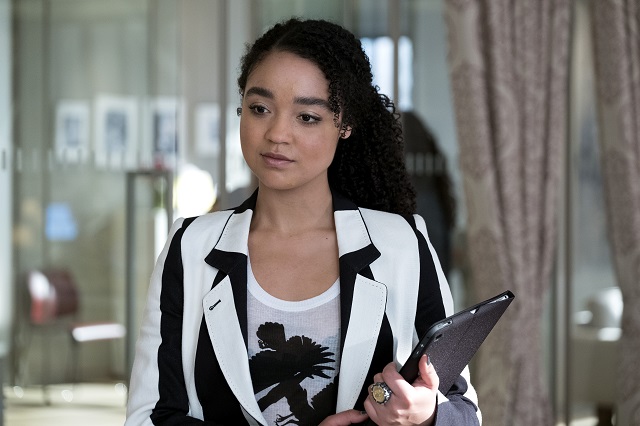 The first time it happens — in episode three (“The Woman Behind the Clothes”), when Kat’s taken aback by the heinous nature of online attacks — I raise a curious eyebrow. She’s a woman of color, with opinions, whose entire career is based around the Internet, and she’s just now realizing how vitriolic that place can be?!, I think. It seems absurd to me but I opt to cut the show a little slack…it’s new and they’re just finding their footing. Plus, the video from which Kat’s storyline is seemingly derived didn’t engage on the racial aspect either.

But the second time it happens — in the fourth episode (“If You Can’t Do It With Feeling”), when Kat punches a bigoted white man on the street, is arrested, while Adena scurries away, is subsequently lectured by her white female boss about her privilege and compelled to apologize — I find myself infuriated. I grab my phone and type out a quick text to a friend who I’d convinced to watch the show: do you think the writers forgot that Kat’s black? I’m hardpressed to think of a single moment of Kat’s story that wouldn’t be written exactly the same, if the actress that played Kat Edison was white… and that’s a huge problem.

Every black person wears their blackness differently — we are not a monolith, as the saying goes so I don’t expect Kat’s reaction to social media trolls or cops to be the same as mine. Her experience is unique, informed by her privilege as the light-skinned, educated, well-off daughter of two psychiatrists, but it’s still grounded in an America that openly flirts with — or, at its worst moments, fully embraces — white supremacy. To not engage, at all, about how walking through Trump’s America as a black woman presents specific challenges, makes Kat Edison’s character feel wholly inauthentic.

(And, yes, the complete erasure of Kat’s racial identity coupled with turning Alex into a magical negro and turning Adena, a minor character, into the lone representative for intersectional feminism, means that the seemingly progressive The Bold Type has a race problem…but that’s a larger discussion for another day…)

The death threats that Kat receives in “The Woman Behind the Clothes” wouldn’t be a new occurrence for her — it’s what women of color with opinions suffer through everyday on social media and Kat wouldn’t be immune from that. The fact that the episode doesn’t include a single racially-tinged threat among the litany that Kat receives, further reveals that The Bold Type doesn’t want to grapple with Kat’s identity at all… that it feels more comfortable in treating harassment as something universal when, frankly, it’s not. Kat should be allowed the space to be angry at Adena in “If You Can’t Do It With Feeling” because a black woman coming face-to-face with a bigoted white man and the police is at least as fraught as whatever sends Adena scurrying away. Kat’s faith in the justice system… that she, as a black woman, would be spared because she was right? What world is that and how can I get there?

The writers of The Bold Type clearly wanted to tell one overarching story about Kat Edison — the discovery of her sexuality and her love story with Adena — and that’s it. If Kat Edison was played by a white actress, maybe that’d be okay, but she’s not. By casting Aisha Dee, Kat Edison became an intersectional character and that necessitates intersectional storytelling. She is black and female and bisexual and American and she deserves to have all those identities represented. People who live their lives at intersections don’t get to shed all their other identities while interrogating one of them and the writers of The Bold Type shouldn’t be allowed to either. 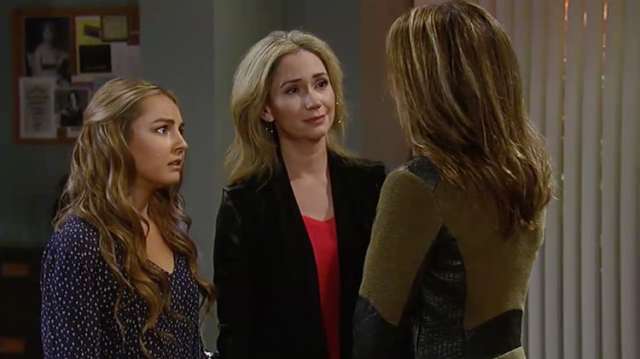 There are four types of couples in the soap world: the supercouple, the pair destined to find their way back to each other, no matter what drives them apart; the potential, the couple that, at times looks like a supercouple, but eventually the flame dies out; the “why-the-hell-not” couple, two people on the canvas tossed together for no discernable reason, usually reserved for gay characters and/or characters of color; and, finally, the the electric couple, the couple with amazing chemistry that’ll burn like a white hot light for a while before crashing spectacularly.

In all my years of watching daytime television, there’s never been a lesbian couple that’s fallen into that last group. The electric couple has been reserved for men who have affairs with their brother’s wives or women who hook up with the new guy working in the mail room… that is, until Kristina, a young Wesleyan co-ed, fell in love with her married lesbian English professor, Parker. They had all the elements of an electric couple — including that rare forbidden quality that makes you spend every second wondering if you should cheer for this pairing — but, ultimately, the relationship that should’ve crashed spectacularly just kinda fizzled out.

Fast forward to a year later and Parker’s moved to Port Charles and runs into her one-time lover right away. She’s newly divorced and Kristina — who’s barely had a storyline in a year, much less any romance — is single as well. They don’t fall into bed right away — Kristina’s understandably reluctant to re-engage with the woman who broke her heart — but they reconnect and show signs of turning from an electric couple into something more.

But then, the bottom falls out. The writing turns dreadful…some of the worst I’ve ever seen on a soap. The couple’s compelling (and problematic) history is, at best, rewritten and, at worst, completely ignored. Every interaction between the pair feels forced and/or recycled and they kiss with the enthusiasm of a kid forced to kiss his great aunt who smells like moth balls. Hell, when Parker’s teaching her class called “Women, Wit and Politics In Fiction From Rebecca West To Now,” she teach Jane Austen’s Emma, which precedes Rebecca West’s life by 77 years…and General Hospital couldn’t even be bothered to spell Austen’s name right on the prop book. It’s like they weren’t even trying to do this pairing justice.

And if that wasn’t bad enough, as one final show of disrespect to fans who’d waited a year for this story to resume, General Hospital shipped the couple off the canvas on National Coming Out Day.

Okay, your turn! Who were your favorite and least favorite TV characters of 2017?

auto has written 523 articles for us.