Some of the sexiest scenes in cinematic history are scenes that don’t involve sex at all. One of the greatest examples is Sharon Stone crossing her legs, a scene that screams sex without the sex. I saw a lot of movies this year (thanks, MoviePass!), and a good number of them ruined my life by supplying me with GIFs I can’t stop watching on a loop. These are 2017’s eight most homoerotic movie scenes that weren’t sex scenes.

8. Charlize Theron pulling up her turtleneck (before killing men) in Atomic Blonde

Clothing is such an important part of this movie’s sex appeal.

7. Rebecca Hall tilting her head like this in Professor Marston and the Wonder Women

This movie is full of really hot, queer sex. But even when its central poly couple isn’t engaging in roleplay and bondage, Professor Marston drips with sensuality. Rebecca Hall is hypnotizing.

6. Letty Ortiz driving a vintage Corvette through the streets of New York in The Fate Of The Furious

Ok, so it in no way compares to the homoeroticism of Michelle Rodriguez and Ronda Rousey beating each other up in Furious 7, but I love each and every time that Letty Ortiz gets behind the wheel in cinematic history.

5. The dance off from Girls Trip

Dance offs are gay (see also: Cheryl/Veronica on Riverdale). And in my professional opinion, Sasha (Queen Latifah) and Ryan (Regina Hall) are ex-girlfriends (and I’m not the only one who thinks so), which is plainly obvious throughout the movie. It’s a great movie, and this is a great (and sexy!) scene. Tiffany Haddish’s jumpsuit deserves awards. 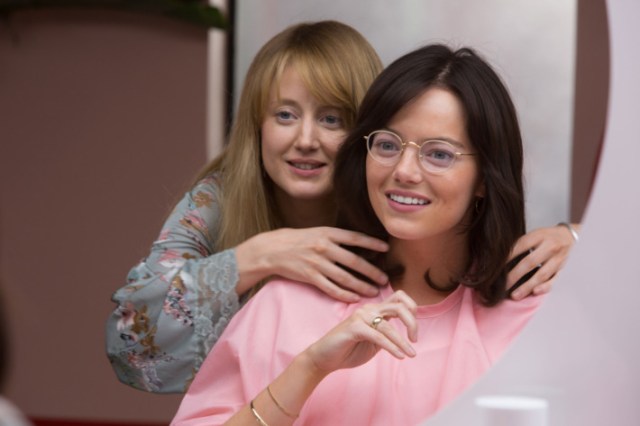 This movie blesses us with not just one but TWO sensual haircut scenes. This achievement is so important that I wrote an entire article about it.

3. Antiope shooting three arrows at once in Wonder Woman

Everything about Antiope in Wonder Woman screams gay and, more, specifically, Mommi. She can shoot me with her arrows any day.

2. Every time Cate Blanchett did this in Thor: Ragnarok

I pass out a little bit every time I see this.

1. Tessa Thompson walking away from a rainbow explosion in Thor: Ragnarok

Look, Thor: Ragnarok is a movie full of hot people. Thompson’s Valkyrie was written as bisexual, and even though that does get implied in the movie, the scene that was supposed to explicitly confirm it got cut, which is upsetting, but I will cherish this gif forever.