Obviously this is a big deal, because 10 out of 10 Obama voters la-la-la-love themselves a good Tina Fey as Sarah Palin moment. I mean, we REALLY love it.

Do you know what I mean? Okay, well, let’s make an infographic to explain it for you: 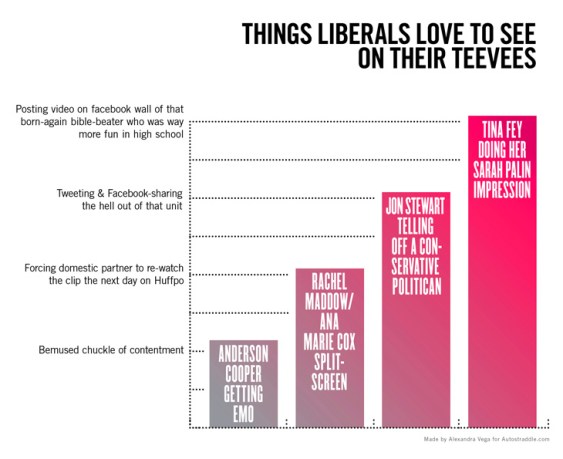 PALIN/BACHMANN:
The title of this article made me LOL for real. Palin and Bachmann Begin Whirlwind Love Affair at Rally – really, this is what Sunday Funday is about. “After their breathy first encounter, Bachmann could not help but point out just how beautiful Sister Sarah was by stating “And as absolutely drop dead gorgeous this woman is on the outside, I’m here to testify that she is 20 times more beautiful on the inside.” It must have been quite a good look to know that Palin is twenty times more beautiful inside than out… The love fest did not end there, of course, Bachmann, her hand on the small of Palin’s back, helped the former governor of Alaska get up there on the podium and raise her arms in joy.” (@lezgetreal)

GAGA:
There is so much Lady Gaga content on the internet today it’s not even funny. First there’s this article at the Daily Mail which is kind of weird in and of itself b/c they call her “lippy” and spend the first three paragraphs talking about her hair, but is awesome once they actually let Lady Gaga talk. It’s mostly an interview concerning Gaga’s campaign with MAC against AIDS, so a lot of the quotage involves The Sex: “‘I remember the cool girls when I was growing up. Everyone started to have sex. But it’s not really cool any more to have sex all the time. It’s cooler to be strong and independent… Something I do want to celebrate with my fans is that it’s OK to be whomever it is that you want to be. You don’t have to have sex to feel good about yourself, and if you’re not ready, don’t do it... I’m single right now and I’ve chosen to be single because I don’t have the time to get to know anybody. So it’s OK not to have sex, it’s OK to get to know people. I’m celibate, celibacy’s fine.”

She helpfully adds that if you are ready for sex, there are free condoms available at the end of her concerts. And don’t worry, actual AIDS concerns were addressed too: “‘The rate of infection worldwide is higher than ever for women in our particular demographic,’ says Gaga. ‘Those most at risk are women in my age bracket, 17 to 24 [she is 24], and Cyndi’s, which is 38 to 60 [Cyndi is 56]… This is a disease that affects everyone, not just the gay community, and right now it’s mostly affecting women.” (@dailymail)

Also, also, I’m not even really sure how to feel about this, but an apparent Gaga fan managed to get onto the crew for putting together her dressing room at a show in Wollongong, Australia, and documented the entire experience and also all of her stuff in extreme stalkerish detail, including, um, which of her wardrobe items he got to touch, like “a cream baseball jersey with spikes all over it. (I recognised it and found a picture when I got home)”

The original post at ONTD is no longer entirely public, but Gawker has reposted the content. Check it out if you need to know what color couches Gaga puts in her dressing room and/or her assistant’s names. (@gawker)

PROM:
The people over in Itawamba County have got to start feeling stupid at some point, because I swear to God every single gay celebrity in America has offered Constance McMillen her own prom by now. “Former ‘N Sync member Lance Bass will join celebrity chef Cat Cora and members of Green Day in sponsoring a gay-friendly prom in Mississippi after a lesbian teen was duped into attending a “fake prom” earlier this month. The Tupelo, Miss. event, scheduled for May 8, is being organized by the Mississippi Safe Schools Coalition and is open to all students, regardless of sexual orientation.” Maybe they can get SamRo to DJ! Riese thinks she’s really hot, you guys. (@theadvocate)

Guess what though? The same thing happened to an African-American girl in Birmingham… in 1965. My how far we haven’t come:

It was reminiscent of a story told by The Birmingham News about what happened in the spring of 1965 to the first African-American girl to integrate Jones Valley High School in that town:

“(Carolyn King) spent all Saturday getting ready, fixing her hair, slipping into the pink floral dress her mother finished the week before. … She and her date drove … toward the high school gym. They turned the corner. The gymnasium was dark, empty … White mothers of the prom planners had kept the location of the Jones Valley High prom a secret so she couldn’t attend.”

GAY CARS:
The New York Auto Show: Selling Otherwise Straight Cars to Gay People: “Isn’t it what we’ve been fighting for, all these years? With Stonewall and Silence = Death and rioting on Fifth Avenue a week after Matthew Shepard was murdered—weren’t we just demanding the right to be treated like any other schmuck with a buck in this country?” (@awl)

GAY PRIEST:
A gay Episcopal priest is one of the four in the running to become the 11th bishop of the Episcopal Diocese of Utah. If he wins, this will be the gayest thing to happen to Utah since Joe Pitt in Angels in America. (@localnews8)

COLLEGE:
The newest student body president of the University of Michigan is gay, which seemed to be merely pretty cool until it turned out he’s actually going to address a lot of gay issues for students on campus. “Armstrong campaigned on pressing U-M’s administration for gender-neutral housing options that would allow students to choose opposite-sex roommates, rather than always pairing males and females with others of their own gender. It’s an issue he said would appeal to many students, including those who are transgendered and may feel uncomfortable rooming with someone of the same sex.” (@freep)

And hey, speaking of queers in college, have you submitted to OUTmedia and Campus Pride’s “Be Queer, Buy Queer” video contest yet? There are sweet prizes and also you’ll have something cool to show your mom, she’ll be really proud of you I bet!

WORKOUT:
Jackie Warner on her new book, her new show Thintervention, and the scandal that rocked Workout. (@advocate)

VANESSA HUDGENS:
Queerty thinks there’s a legitimate chance that Vanessa Hudgens (of High School Musical) could become a young gay icon with her role as Mimi in Neil Patrick Harris’s production of Rent. I don’t really know about that, but then again Miley Cyrus was in Palm Springs during Dinah Shore Weekend so maybe these kids really are posed to win over our gay hearts, I dunno. On the other hand, Mimi is not gay, so wtf. (@queerty)

TILA:
Oh hey Tila Tequila did something crazy and dumb. This time it was shoplifting. Eh eh there’s nothing more I can say.