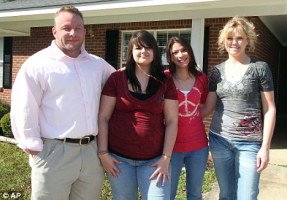 Constance with her family and girlfriend

THE ART OF LOSING YOUR PROM IS NOT HARD TO MASTER:
The Judge made his ruling in the case of Constance McMillen and both sides are satisfied with the verdict.

A Mississippi school district violated a lesbian student’s rights by banning her from bringing her girlfriend to the prom, a federal judge ruled Tuesday, but he stopped short of forcing the district to hold the event.

U.S. District Judge Glen H. Davidson denied an American Civil Liberties Union request for a preliminary injunction that would have forced the Itawamba County school district to sponsor the April 2 prom and allow Constance McMillen to escort her girlfriend and wear a tuxedo.

Davidson did say he will hold a trial on the issue later, but he did not set a date and any ruling would likely come too late to force the district to hold the prom when it was originally scheduled.

Davidson’s order says the district violated McMillen’s constitutional rights by denying her request to bring her girlfriend and wear a tuxedo, and ACLU Mississippi legal director Kristy Bennett called that a victory.

She said Davidson’s order allows McMillen to amend her petition within 30 days, meaning she could sue for damages because she couldn’t get the prom reinstated.

The article also mentions that Constance has kept her 16-year-old girlfriend out of the spotlight at the girl’s parents request. We hope she gets to go to the private prom so that she can be in our prom gallery and be as cute as these kids: 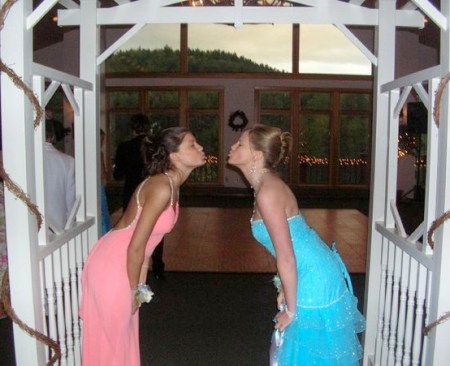 DAN CHOI:
Dan Choi did an interview with Newsweek following his arrest and short stint in jail for handcuffing himself to the White House fence. I continue to be impressed by him every time he talks. He also calls out the HRC and Joe Solmonese:

Why now? Because you get tired of talking. [Over the past two years] I’ve done 50 live interviews, a hundred other interviews, how much more talk am I expected to produce? When I heard Kathy Griffin was going to be a spokeswoman for Don’t Ask, Don’t Tell, I wondered about that. I have great respect for her as an advocate. But if [the Human Rights Campaign] thinks that having a rally at Freedom Plaza with a comedienne is the right approach, I have to wonder. Don’t Ask, Don’t Tell is not a joking matter to me. To be at Freedom Plaza and not at the White House or Congress? Who are they trying to influence? I felt like they were just trying to speak to themselves. If that’s the best the lobbying groups and HRC can do, then I don’t know how these powerful groups are supposed to represent our community. Kathy Griffin and [HRC president] Joe Solmonese said they would march with me to the White House but didn’t. I feel so betrayed by them. (@newsweek)

PROP 8:
Judge Vaughn Walker, of Prop 8 trial fame, has ruled that Prop 8 opponents must release their internal memos and emails to the lawyers fighting to uphold the ban on gay marriage. The ruling could prolong the trial even more. Judge Walker postponed closing arguments because he wanted to go through the evidence. The defense lawyers now have until April 12 to submit new evidence for consideration, so it will probably be a few more months before we get this trial resolved. (@ap)

MARRIAGE:
Let California Ring, a group led by the Equality California Institute, took a comprehensive look at research on same-sex marriage campaigns and just released a report on their findings. Download the report, it’s worth a read. It mostly talks about what strategies are most effective in winning people over for marriage equality. It says some stuff we already knew (such as, personal conversation about your life and being gay is the most effective way to change minds or being out isn’t quite enough), and some stuff we didn’t know (it recommends talking about “fairness” instead of “equality” because more people are down with that).

If you want, you can also give EQCAI some feedback with this form, or you can join them at one of the roundtables they’re having (one is online on Thursday).

MALAWI:
A judge has ruled that there will be a trial in the case of two men arrested for “gross indecency” after they got engaged in Malawi. They have now spent almost three months in custody in what is being seen as a test case for gay rights in Malawi. The judge said a full trial would proceed in April. Homosexual acts carry a maximum prison sentence of 14 years. (@bbcnews)