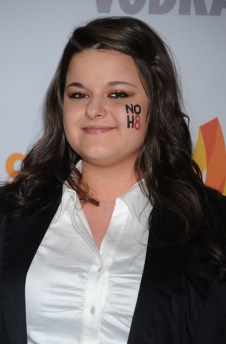 Constance McMillen is now seeking unspecified monetary damages to compensate for “public humiliation” endured by the fake prom.  In a lawsuit filed today, the ACLU names Itawamba County school district and school officials as defendants. As you probs already know, this began when Itawamba High School canceled prom rather than allow Constance to bring her girlfriend and wear a tux.

Meanwhile, just in case Contance McMillen was only slightly unpopular rather than vehimently disliked by her asshat classmates, a facebook group has been started in response to Westboro Baptist Church’s apparent plans to picket Itawamba Agricultural High School’s graduation on May 22nd, 2010. The facebook group is trying to mobilize a counter-protest.

Surely Westboro could find a place to hang out with more than two verified lesbians present? Doesn’t Lilith Fair start in May? Here’s their explanation, which is per ush chock full of logic and sense:

WBC will picket the graduation of Itawamba Agricultural High School to remind the parents, teachers and students of this nation that God said “Thou shall not lie with mankind, as with womankind, it is abomination.” Leviticus 18:22. This generation has been raised to believe that they can live for the devil and still go to heaven, that God has no standards and the biggest lie of all – that God loves everyone. The parents of Fulton, MS feign outrage that a filthy dyke wants to parade her “girlfriend” around at their night of fornication called a prom. They had a duty to teach their children what the Lord requires of them. They shirked this duty. The Lord repays them to their face by sending dykes, burning in their lusts, to tyrannize them. “For this cause God gave them up to vile affections: for even their women did change their natural use which is is against nature.” Romans 1:26

Anyhow. Um, Fred Phelps needs a new intern, ’cause from where we’re sitting it seems that the outrage from bigoted parents & students is hardly “feigned.” They’ve been pretty crystal clear about it.

Maybe we’re feeling very motherly today, but is anyone else worried that Constance is now basically totally doomed w/r/t people treating her decently at school?

Since this whole thing began, Constance has been living a double life — whereas she’s been accepted and embraced by the media and the gay media in particular, she’s still hated by her classmates. Her classmates have even attempted to “defend” their decision to dupe Constance into attending a fake prom by claiming they aren’t homophobic, it’s just that they’re sick of “Constance playing the lesbian card to prove she ALWAYS gets what she wants.”

On the other end of the affectionate scale, the gays (like us!) have been giving Constance a ton of support. In March, Constance was flown to LA to appear on The Ellen DeGeneres Show, where she was given a $30,000 check for her college education.

Earlier this week, Constance was invited to present Wanda Sykes’s award at the 21st Annual GLAAD Awards in Los Angeles, where she rubbed elbows with Adam Lambert and hung out with her guest, Ceara, who made headlines last year for protesting her school’s protest of Ceara wearing a tux in the yearbook.

On May 8th, Constance will attend a gay-friendly prom sponsored by the American Humanist Association, who began planning this event for her in March. Green Day, Lance bass and Cat Cora are among the stars financially supporting the everyone-is-welcome event in Downtown Tupelo, Mississippi.

In June, Constance McMillen will be a special guest at Memphis Gay & Lesbian Community Center’s “Prom for All” event. She’s been tapped to be Grand Marshall of the New York City Pride Parade later that month.

[We’d still just really really really would like a photo of Constance & her girlfriend going to some prom somewhere for our queer prom gallery. Like a lot.]

We’re hoping Constance can hang in there with what’s surely to be a disgruntled student body during her last month of high school! and then Constance you have to run fah fah away like Forrest Gump?

MISS AMERICA:
Miss America says there’s no reason why Miss America couldn’t be a lesbian. We’ve been totally baffled why this story is news, but the linked article at Hip-Hop Wired does actually succeed in making it relevant, therefore we are now linking to it there you go! (@hiphopwired)

BISEXUALS:
Remember when someone on the L Word [Alice? Shane?] said lesbians love to eat their own? Well so do the gay boys, obvs. Three bisexual men are suing for not being deemed “not gay enough” to play in the Gay Softball World Series, and they’re suing… (@az central)

BAIOJEZEBELGATE:
Scott Baio Defends Wife’s Anti-Lesbian Facebook Rant. Because you know, she has a lot of lesbian friends. Also, Jezebel has a timeline of Scott Baio’s online meltdown. (@huffpo, @jezebel)

TOURISM:
Mount Everest and Fiji are totally down with being hot gay vacation spots. (@the australian/radio fiji)

REPRODUCTIVE RIGHTS:
According to Newsweek, our generation doesn’t care about defending abortion rights: More than half (51 percent) of young voters (under 30) who opposed abortion rights considered it a “very important” voting issue, compared with just 26 percent of abortion-rights supporters; a similar but smaller gap existed among older voters, too. Worse still for NARAL, the millennials surveyed didn’t view abortion as an imperiled right in need of defenders. (@newsweek)

CENSORSHIP: Networks Ban Plus-Size Ad – “While Victoria’s Secret Angels are clearly fine to prance around the networks, the commercial for Lane Bryant’s new lingerie line has been turned down. The company is pissed — and it’s openly saying so.” (@jezebel) UPDATE: APPARENTLY IT WAS DUE TO A COPYRIGHT ISSUE, NOT THE CONTENT OFT THE AD.

HEADACHES:
Woman With A Migraine Ends Up With A Chinese Accent – “”The first few weeks of the accent was quite funny but to think I am stuck with this Chinese accent is getting me down. My voice has started to annoy me now. It is not my voice.”” (@msn)

RELIGION: Sikhism and it’s Progressive Feminist Beginnings – “A principle of Sikhism not to engage in missionary work and by writing this blog post I would like to make it clear from the outset that I am not trying to convert anyone, but simply want to explore the situation of women who belong to the Sikh religion.” HELLO! A religion that doesn’t allow anyone to evangelize! If that doesn’t make you want to read this article, you’ll just have to believe me when I say it’s fascinating. (@the f word)