PROM UPDATE: Clearly the world loves Constance McMillen just as much as her daddy and her girlfriend do. Not only has a New Orleans restaurant owner offered to bus & host the prom, but now the American Humanist Association has offered to plan and fund a prom for the Itawamba County Agricultural High School in Mississippi:

“It’s shameful that closed-minded members of the school board are prepared to deprive an entire class of students their prom over their outdated religious mores.” said Roy Speckhardt, Executive Director of the AHA. “People can hold to any belief or no belief in this nation, but the school board misuses their position when they try to impose their beliefs on the student population in Itawamba.”

Who are these lovely humanists, you ask? Well: “Humanists and freethinkers have a history of speaking up for the rights of all. The AHA was among the first to support civil rights, equal pay for equal work, and the right of same-sex couples to marry. Recently the AHA launched the LGBT Humanist Council to advance equality for lesbian, gay, bisexual, and transgender people and their families.”A $20,000 grant has been made available to the AHA for hosting the prom.

And also? Wanda Sykes has invited Constance to LA to present her GLAAD award.

Someone commented on our lesbian prom gallery post that they went to a conservative school in Utah and had been nervous that the LGBT dates would be rejected by the school board but nope, all were accepted. If anything, I think it’s safe to say that the controversy surrounding Constance’s situation has definitely scared other schools out of making similar proclamations — and to realize that by doing so, they are hopelessly out of touch.

Regardless a humanist prom sounds like so much more fun!

CONTEST WINNERS:
Hey! SPEAKING OF PROM!? You guys sent us all your cutie patootie prom pictures, which pretty much warmed our hearts forever ever. We’re going to keep collecting them even though the contest is over, I mean why not? Bookmark this page, and maybe also this page. Maybe wanting to be a part of this gallery will be a motivating factor for you to take a lady! We hope to get heaps of photos in May or whenever it is that kids go to prom. INCLUDING CONSTANCE. Where’s my Seventeen YourProm issue?

In the meantime, one of the lucky already-submitted couples can buy themselves like, two new cute pairs of boyshorts. If this photo looks like you, then your faces are the faces my roommate pointed at with her eyes covered and that means you win a $25 amazon gift certificate! Email autostraddle [at] gmail [dot] com to get the special code. 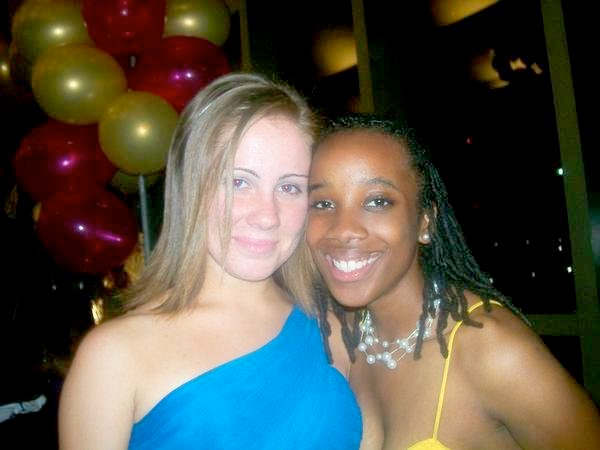 GLAAD AWARDS: Saturday night was the New York City GLAAD awards. We’ll have more for you on that later this week, because Autostraddle sent our photoblogger Robin Roemer and Technostraddle Editor Taylor to the event, and we’re told that Robin took some nice photos. Also there was a giant rainstorm yesterday in NYC, so I’m sure that was fun!

Cynthia Nixon was given the Vito Russel award for a gay media professional “who has made a significant difference in promoting equal rights for the gay community,” and Joy Behar won for sitting at a table with Elisabeth Hasslebeck every day without losing her shit. I believe the people call that “an excellence in media award.” 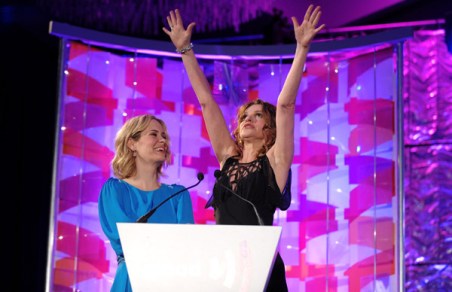 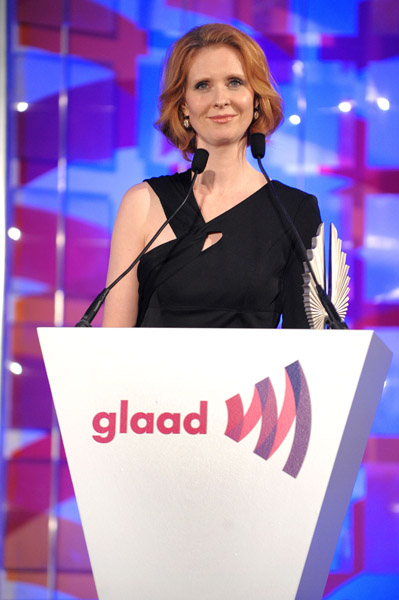 I love Cynthia Nixon so much. Why? Because of Miranda. Really. I just REALLY LOVE MIRANDA. 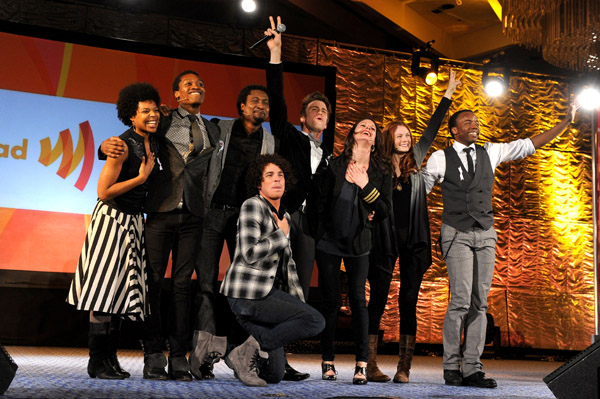 The Cast of HAIR Plays a lot of gay events

TELEPHONE:
If you want more Telephone talk even after reading our extra-special set of feelings on the video (and let’s be real, you do), then take heart! First, there is the kind of hilarious experience of reading what a (presumably) straight publication had to say about it: “Lady GaGa can be seen indulging in a sizzling lesbian kiss with a female prison inmate for her new Telephone video… The crooner also gets almost naked in the promo, barring a few bits of precise pixellation and some carefully-placed gaffer tape.” I think the last person to be called a “crooner” was Frank Sinatra. (@littleabout)

Also, also, did someone say “best behind-the-scenes video ever?” It is frustratingly un-embeddable, but the good people at E! Online have in fact provided an in-depth video of the making of Gaga’s mini-movie, complete with Tyrese talking about being murdered by Beyonce, Beyonce freaking out adorably on the bed, and the thoughts & feelings of Semi-Precious Weapons. Also I think it might play “Telephone” more than the actual music video does? (@eonline)

PROM:
Are all the sad stories about queer kids who can’t go to prom getting you down? Would it make you feel better to hear about The Butterfly Ball? “The decorations were the same: confetti, sparkly centerpieces on the tables and streamers on the doorway. Outgoing couples broke the ice on the dance floor as disco lights flashed, and Pitbull, Lady Gaga and Beyonce blared from the DJ’s speakers. But the ballroom at the Sheraton Harrisburg/Hershey Hotel wasn’t a venue for any ordinary prom. On Friday night, it was a safe haven for dozens of lesbian, gay, bisexual and transgender high school students from across the midstate.”

Queer proms might not solve all the world’s problems, but they have much better music and are potentially much more enjoyable to go to if you want to bring your girlfriend! Also, it’s possible that this photo alone of 18-year-old John Tirado obviously doing the Single Ladies dance could melt the hearts of everyone in Constance McMillen’s hometown all by itself. (@pennlive)

GENDER NOT SPECIFIED:
Norrie May-Webley, who doesn’t identify as male or female, has become the first person in Australia to be legally documented as someone with “gender not specified.” The future is bright! Put on some sunglasses, Australia! (@smh)

WEIR:
In the ongoing did-Stars-on-Ice-exclude-Johnny-Weir-for-being-a-homo debate, Stars on Ice has spoken up to defend themselves: “”We are disappointed that there is untrue and inaccurate information being disseminated. Please be assured that the ‘gender identity and sexual orientation’ of cast members has never been a consideration in the selection of tour performers.” You can tell they’re serious because they put “gender identity” and “sexual orientation” in “scare quotes.” (@queerty)

GAY HOLLYWOOD:
The Independent addresses the irritating playing-gay conundrum: it’s hip for straight actors to play gay onscreen, but still taboo for real gay actors to come out. As Colin Firth says, “”There might be risks for a gay actor coming out,” he said. “The politics of that are quite complex, it seems to me. If you’re known as a straight guy, playing a gay role, you get rewarded for that. If you’re a gay man and you want to play a straight role, you don’t get cast – and if a gay man wants to play a gay role now, you don’t get cast. I think it needs to be addressed and I feel complicit in the problem. I don’t mean to be. I think we should all be allowed to play whoever – but I think there are still some invisible boundaries which are still uncrossable.” (@independent)

WOMEN FILMMAKERS:
What would a woman have done with Avatar’s budget? So far, no one has had a chance to find out. But now a team of six women filmmakers are putting together a movie with 82 women in film answering that question. See some of their favorite answers here! (@jezebel)