Hey lassies! Did you travel anywhere exciting and queer this week? I went to Northampton and saw so many beautiful and handsome ladies. If you’re looking for somewhere to go, we’ve got guides for Brighton, Sicily, Montreal, Portland and Seattle. Riese read things that she loves, Lizz fashioncapped Pretty Little Liars, and Sarah talked about how to motivate yourself to exercise (ahem CAMP). In music, we’ve got a girl power playlist, a list of vegan cover songs, a playlist for girls in the world and the weekly music fix. Carolyn cooked spaghetti squash with spaghetti sauce and Intern Grace interviewed Kate Leth about comics.

The Me Too! Award to Mollie: “Well if Hannah says she wants all of the girls, and as I am a girl, that technically means she wants me and therefore just asked me out? Yeah? Sweeet.”

On That All-Star Prop 8 Play Was So Cool, You Have To See It!:

The Six Degrees Award to Nika : “This is going to help a lot of people lower their Kevin Bacon number.”

On NSFW Lesbosexy Sunday is on Top of Things:

On Get Fit: Motivating Yourself To Become a Person Who Exercises:

The Kelly Rowland Award to kjdawson80: “This is really nerdy, but I have a recumbent bike at home, and it’s set up right in front of my TV and various video game systems.
When it’s time to bike, instead of looking at it like, “FFFF I need to bike again. This sucks!” I view it as “I get to play Syndicate AND get some exercise in. YES.”
Now when I play video games outside of my biking time, sometimes I feel like I need to be biking.”

The Probably Tim Award to AG: 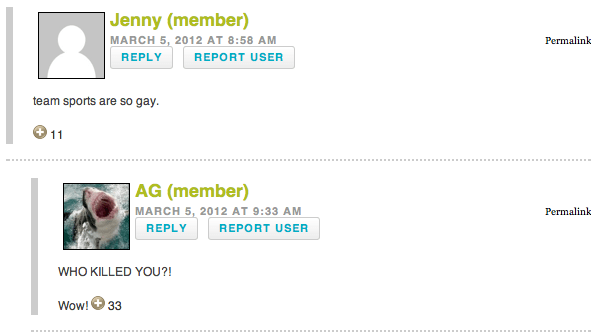 The Double Black Diamond Award to Lily: “As a polyamorous perv, I have to say, right-wingers putting me at the bottom of the slippery slope makes me feel pretty badass.”

On Listicle: If You Give A Vegan A Cover Song:

The Portmanteau Award to Grace_B: “Not exactly relevant, vegan “cheese” in French is referred to as “Fauxmage” which is awesome.”

On Conservatives Lash Out Against Lesbian Mayor For Being a Lesbian, Promoting Equality:

The Water Into Wine Award to chey: “During Pride last year I got a protestor to take jello shots with me. Curing hate one shot at a time.”

On If You Could Be Any Type of Cereal In The World, What Would You Be?:

The AWARD Award (On Purpose This Time) to LeNic and Lex Hart: 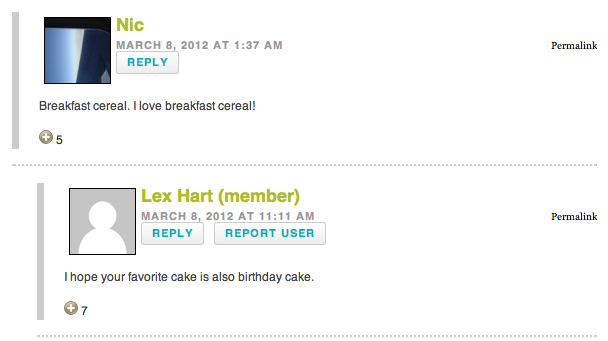