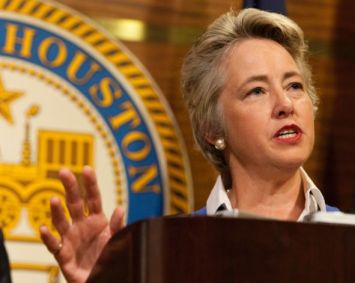 Annise Parker, known lesbian and the mayor of Houston, is facing political backlash from conservatives who were apparently under the impression that she was going to keep her mouth shut about matters such as marriage equality when she took office.

According to the Houston Chronicle, Parker recently participated in a nationwide call for the legalization of same-sex marriage, proclaimed Valentine’s Day to be Freedom to Marry Day, and has urged President Obama to “evolve” towards supporting marriage equality.  This kind of “activist behavior” has triggered the backwards-gaydar sense that is standard-issue for all of your conservative, evangelical bigots.
Pastor Steve Riggle of Grace Community Church, a mega-church in Houston, spent an hour ranting to his sizable congregation about Parker’s failure to uphold the Texas Constitution because she is advocating for something that the majority of Houstonians oppose (according to Riggle who cited a poll from 2005).
“Respectfully, if you cannot uphold the Texas Constitution, then you should do the honorable thing and step down,” Riggle continued in his “sermon.”

Also, because speaking out for marriage equality and balancing a budget are two mutually exclusive things, the Harris County GOP Chairman Jared Woodfill told the Chronicle that Parker really “needs to be in Houston doing her job balancing the budget,” rather than attending conferences on marriage equality with other mayors in Washington D.C.

Woodfill and other Houston conservatives like him have made it very clear that they think Annise Parker is deliberately violating the Texas Constitution by advocating to change it.  But believe me, while the Texas Constitution might be somewhat of a joke, it does not include any sort of clause that would render advocating for its amendment to be unconstitutional. In fact, changing state constitutions is something of a hobby for man conservative anti-gay politicians who agitate for amendments to ban same-sex marriage, so it seems confusing that it would be unconstitutional for Parker to do the same thing in the name of equality.

In response to the all of the hullabaloo, Mayor Parker told the Huffington Post:

“Sometimes I sort of scratch my head. Okay, I’m an out lesbian. They know that. I’m in a long-term relationship. And yes, I want the ability to marry my spouse. And here I am, one of 90 mayors from around the country, and somehow it provoked this wave of hate mail. And the funny thing is that this initiative, it actually came from my mayoral colleagues in the big cities. This was Antonio Villaraigosa from Los Angeles. It was Mayor Bloomberg. It’s Mayor Menino in Boston. Nutter in Philadelphia. Emmanuel in Chicago.They had it worked out and then they invited me to join. This is not an initiative from the GLBT community. But because I’m a part of that, it’s like, somehow in people’s eyes down here, I’ve changed from my role as mayor of Houston into lesbian activist. Well, I’m the mayor of Houston first, but I’m still a lesbian. And I care.”

Mayor Parker is up for re-election in 2013, and it seems that in spite of her haters she will continue to advocate for change on both a state and federal level.