If you’re too young to be familiar with him, lucky you. If you aren’t, you are rolling your eyes. I mean, the guy refers to feminists as “feminazis” on a regular basis, his stated stance on black and African-American people is “They’re 12% of the population, who cares,” and he is overall just a landmine of offense.

For instance, let’s just take a walk down memory lane to revisit some of the amazingly homophobic comments this man has made for perspective. Back in 2009 David Badash at The New Civil Rights Movement picked his top five homophobic remarks from the man including, “When a gay person turns his back on you, it is anything but an insult; it’s an invitation” and topping the charts was the comment:

“…let’s say we discover the gene that says the kid’s gonna be gay. How many parents, if they knew before the kid was gonna be born, [that he] was gonna be gay, they would take the pregnancy to term? Well, you don’t know but let’s say half of them said, “Oh, no, I don’t wanna do that to a kid.” [Then the] gay community finds out about this. The gay community would do the fastest 180 and become pro-life faster than anybody you’ve ever seen. … They’d be so against abortion if it was discovered that you could abort what you knew were gonna be gay babies.”

And why stop there! A few of his most racist comments include, “Look, let me put it to you this way: the NFL all too often looks like a game between the Bloods and the Crips without any weapons. There, I said it,” and, “The NAACP should have riot rehearsal. They should get a liquor store and practice robberies.” Needless to say, outrage for the fodder this man gives to sexist, homophobic, racists everywhere is not in short supply. 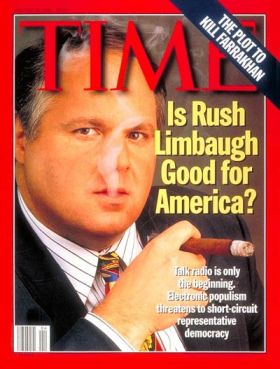 Seriously, my skin is crawling.

Most recently, he called an upstanding citizen who is a long time advocate for reproductive rights a “slut” after she spoke out in support of birth control. Specifically, he said this about Sandra Fluke, a 30 year old Georgetown University Law Student.

If you haven’t heard, here is what Limbaugh said about Fluke after she testified before Congress in support of women’s access to contraception: 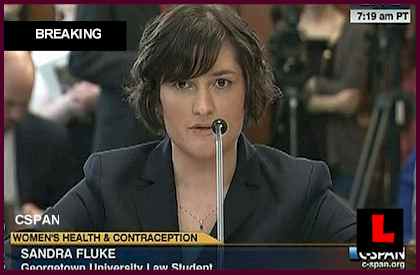 Limbaugh went on to say that in exchange for America paying for Fluke’s sex, we should get a sex tape of her sex acts. And then he “apologized.” Sandra Fluke responded saying that “apology” changed nothing. Limbaugh’s apology cited “an attempt to be humorous” and “illustrating the absurd with absurdity.” It did not include the word “sorry.” Nor did it mention that he had completely elided the difference between “being paid to have sex” and “not having to pay out of pocket to avoid unwanted pregnancy.” It did not mention that he had made completely unwarranted and baseless assumptions about Fluke’s personal sexual decisions, or the bizarre presumption that the only context in which women actively engage in non-procreative sex is sex work, or his reification of the false and hurtful negative connotations of sex work in general. Jon Stewart and the Colbert Report weighed in on the matter.

Limbaugh, many pundits on Fox news, and others on the right are basically arguing that if you can’t afford birth control it’s because you are having too much sex — specifically, recreational sex outside of a marriage or committed relationship — and just need to cut down on the sex to cut costs. That’s not how the science works here, folks! Most people understand that if you have sex once a month or  twenty times a day you still need the same amount of birth control. And that most of the people who need to pay for birth control aren’t necessarily irresponsible “college co-eds” (as Limbaugh erroneously and patronizingly called Fluke) but people in committed relationships who can’t afford or don’t want children (and whose children the GOP doesn’t want to pay to support via foster care or welfare). Sadly, this illogical argument comes as little surprise to those paying attention to the  political climate surrounding health care coverage. As Carmen explained, it’s all part of the GOP war on women’s rights and reproductive health. Also, as Fluke herself pointed out, some women use birth control for reasons other than preventing pregnancy, including to control against endometriosis and to control acne.

In response, financial investors are (finally) dropping like flies, pulling ads from Limbaugh’s program right and left including AOL, Quickenloans, Sears, AllState Insurance and Carbonite. Even Peter Gabriel is out. Meanwhile, Clear Channel continues to stand by their man. It would be nice if advertisers had responded earlier, and if asking his listeners “Have you ever noticed how all composite pictures of wanted criminals resemble Jesse Jackson?” had motivated 11 advertisers to drop him as much as calling a white lady names has. But 11 advertisers, many of them major, going and taking their money with them is a great message for Limbaugh to receive — even if at least one political action committee has actually moved to buy more advertising with him since the Sandra Fluke incident.

There is no denying that progressives are able to rally when need be as we saw with the Komen-Planned Parenthood funding debacle. There have been other times when the left has moved to respond to hateful comments from Limbaugh but maybe it’s a testament to the power of social media, especially Facebook and Twitter, that we may finally see the end of Rush Limbaugh this time around as sponsors bail — or at least fewer people and places willing to give his outrageously hateful and unfounded rhetoric a platform.