Can you believe it’s almost the end of October? I cannot. Mostly because I don’t have a Halloween costume yet. What are you going to be? If you’re still looking for ideas, Lizz has another (gay) halloween costume idea for you. Rachel talked about makeup which is kind of like a costume for your face. In non-Halloween posts, we’ve got recipes for savory scones and roasted mushrooms and asparagus. Riese visited Manchester 3 years ago (it feels like, at least)  and wrote about it, Deanne Smith felt feelings, and Gabby watched Almodóvar’s new movie. Katrina occupied a city and has a thing or two to say about real diversity, Lizz has the televisionary captioning contest, Laneia helped you, and Sebastian discussed LGBT safety and visibility in schools.

On We Need Help: Web Developer To Fix/Enhance Social Networking:

The NEVERRRR Award to TSwizzle: “Have you ever wondered what you could accomplish if you spent less time captioning pictures of cats?
I hope not….”

The Touché Award to lia: 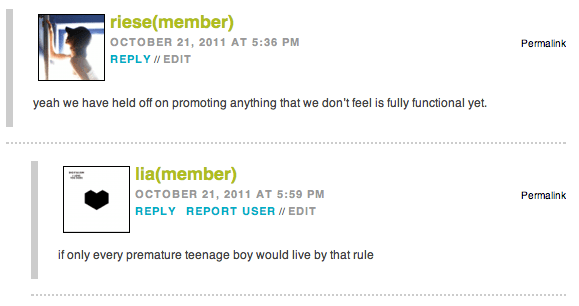 On J. Crew’s Jenna Lyons’ Has a Girlfriend AND a Son With Pink Toenails!:

The 15-year-old Boy Award to Paper0Flowers: “Want. That. Shirt.
This is all the good news! Besides, I can’t take anyone named “Ablow” seriously, because I keep mentally adding “-job” at the end of his name and giggling.”

On 10 Black Women Teaching Us About Sex:

On I’m Not a Costume: STARS and the Campaign Against Racist Halloween Costumes:

The Big Ass-Car Award to SC: 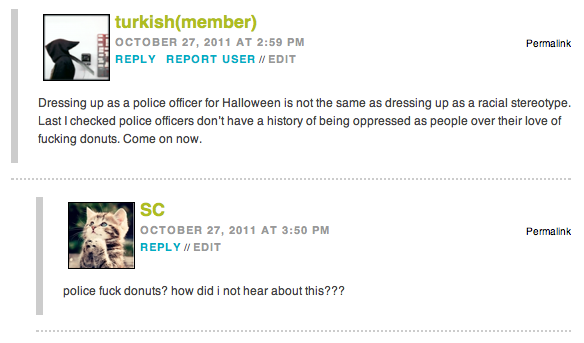 The Have Your Ice Cream and Eat It Too Award to Lex: “The closest establishment to me is a Tim Hortons/Cold Stone. Is it possible to boycott half a building?”