Happy Beyoncé Day to all who celebrate! This week in the wide world of LGBTQ+ TV and Film, Sa’iyda went to OutFest to work the A League of Their Own red carpet! Heather remembered 50 of the original Pretty Little Liars‘ most bananapants moments, was thrilled to see Brianna Scurry getting the love she deserves in The Only, and couldn’t believe how Harley Quinn season three is even gayer and more romantic. Riese has Gen Q season three updates! Drew knocked Irma Vep off its Rotten Tomatoes throne. Shelli shared her thoughts on Prime Video’s Paper Girls adaptation. And two recaps from Natalie and Valerie Anne: Good Trouble and Motherland: Fort Salem. On the movie front, A. Tony Jerome reviewed Nope! And Chinelo reviewed Anything’s Possible!

Only Murders in the Building 206: “Performance Review” 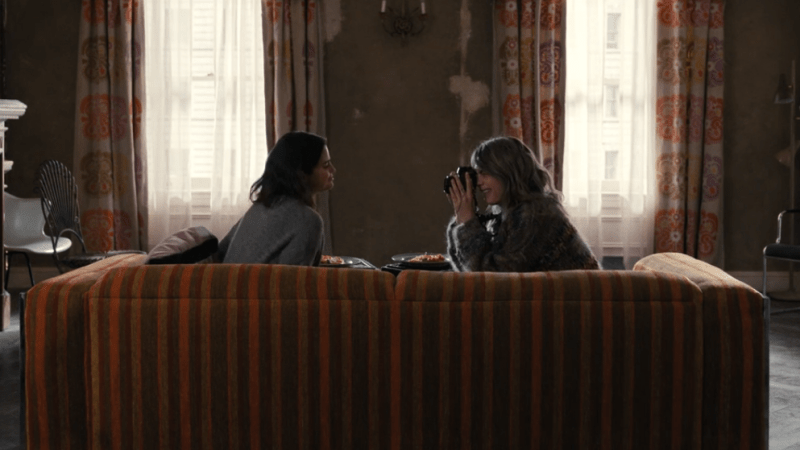 Take a picture it will last longer (than this relationship)

The morning after they kissed and made up, Mabel is making breakfast for Alice, who is taking photos of the apartment, including but not limited to the bloodstain on Mabel’s floor. But when Mabel sees the camera, she pretends she’s taking pictures of her, saying she inspires her. They start to talk about Mabel’s dad, but then Mabel says she wants to change the subject, because Alice makes her feel brand new.

(Side note: Jane Lynch is back as Charles’ stunt double, and he also uses her as an emotional stunt double to break up with his girlfriend in prison for him. They end up flirting but I’m shocked she could tolerate such a high voice… :eyeroll:)

Later, Mabel goes to see Alice and sees a total recreation of her apartment, and actors practicing lines that were plucked from her morning conversation with Alice, and Alice is dressed as Mabel and leaning over an actor dressed like Bunny as they act out her death scene. As Mabel’s vision blurs and her ears ring, Alice tries to say it’s a form of healing through art, but Mabel doesn’t feel healed, she feels retraumatized, so she storms out.

On the way home, Mabel gets a call from Cinda’s assistant Poppy, who has had enough and is going full Gretchen Weiners, spilling all of Cinda’s secrets, but Mabel isn’t in the mood to talk. And when she hangs up, she gets on the subway and sees a man covered in glitter, the potential victim of a glitterbomb she and the boys set off earlier to try to catch a killer, and she just…snaps and starts stabbing him, and next thing you know Bloody Mabel is on the news once again. 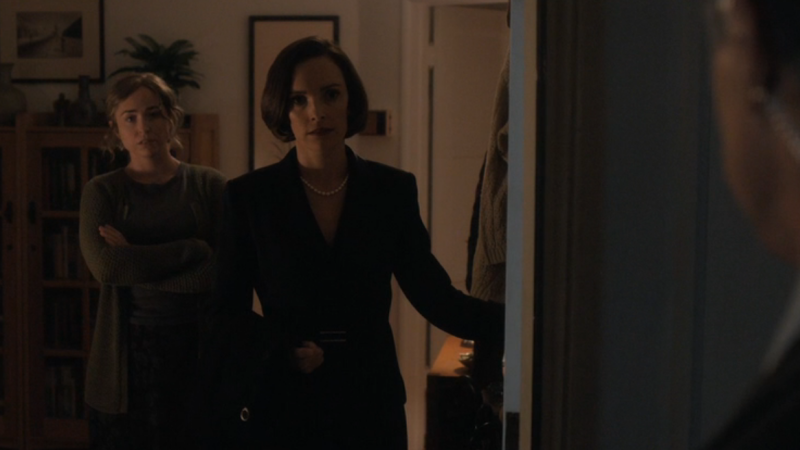 I too crossed my arms when this man interrupted their conversation.

The last episode ended with Ellen going to see Pam and even though I don’t care about anything like dustslides or Marsquakes they made me wait SEVEN ENTIRE MINUTES before they picked that thread back up.

When they do finally return to the most important storyline, Ellen and Pam are sitting at the table, drinking coffee in a silence that is…extremely loud. Pam finally breaks it and calls it like she sees it, saying, “This is weird.” So Ellen gets right to it, pulling out the note Pam left her all those years ago and saying she lied. Pam admits she did, saying she knew they could have had a happy life together, but that she also knew eventually Ellen would start to resent her for the sacrifices she had to make. So she made a choice to make Ellen’s choice easier. To let Ellen go after what she really wanted. Pam also adds a snide remark about Ellen not fighting for her, but Ellen points out that she thought Pam already had an entirely new person. But Pam says she knew Ellen was headed for greatness, she knew it from the day they met, so she thought that making this sacrifice would be for the greater good, that Ellen would get into a position of power and make changes, make a real difference for people like them. But instead she’s just watched as Ellen and her sham marriage make compromise after compromise.

Ellen says sometimes you have to settle for what’s possible, and Pam knows that the Ellen she once knew wouldn’t have liked to hear such a defeatist attitude. Ellen says she’s made sacrifices too; for example, tonight she had to sneak to visit the love of hre life. Pam’s eyes glint at this; it’s nice to hear her say that at least, to be reminded that it wasn’t all in her head, that the love she felt went both ways.

Ellen gets called away and they exchange one last sad glance before Pam closes the door on the Ellen chapter of her life yet again.

Back at the White House, her husband has the audacity to scold her for “taking a risk’ as if he hasn’t been boinking Aides and she gives him a Look that could have melted Elsa’s ice castle. Why should he get to have his cake and eat it too while she just starves? When the VP comes in for a meeting, Ellen asks her husband to leave the room; the line in the sand has been drawn. 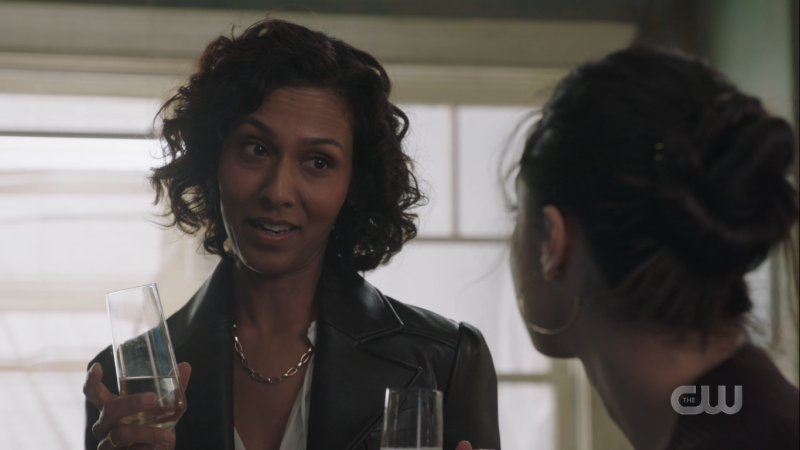 C’mon, there are only a few episodes left, let’s have a lil kiss, just for funsies!

Liz and Max are the literal definition of endgame, but I can’t help but feel like Shivani is constantly flirting with Liz, talking science with her, offering to play her Kate Bush, and taking her on a girls’ trip to New York. It’s kind of unclear if her and Allie are still together or if their daughter’s illness broke them up, but either way I’m enjoying Shivani’s flirtatious presence for now. While Shivani and Liz live it up in New York (and meet up with Rosa, whose roommates give off queer vibes, especially the one named Zephyr), Isobel goes mind walking with Dallas, but not before making him promise HE’S not harboring secret feelings for him. And as annoyed as I was with last week’s episode, I’m glad Isobel didn’t just happily leap into Kyle’s arms so soon after Anatsa left.

Toward the end of the episode, Maria realizes that the mysterious signs she’s been getting all day that she thought were coming from her mother are actually from Alex…though whether he’s dead or somehow able to communicate while buried in alien sand is anyone’s guess.