1. The time A put bees in Ella Montgomery’s car. Not just in the car, though. INSIDE THE AIR CONDITIONING VENTS. They didn’t come flying out until the car was on and the doors were locked.

2. Jason DiLaurentis getting an entirely new face and no one ever even mentioning it.

3. “Don’t be scared, Spence. We’re all family here. Some more than others.” (You know, because of when Spencer got the hots for New Face Jason and then found out he was her BROTHER.)

4. The SNAKE that attacked Spencer in a BOUTIQUE DRESSING ROOM and which CeCe Drake BEAT TO DEATH with a MANNEQUIN LEG. 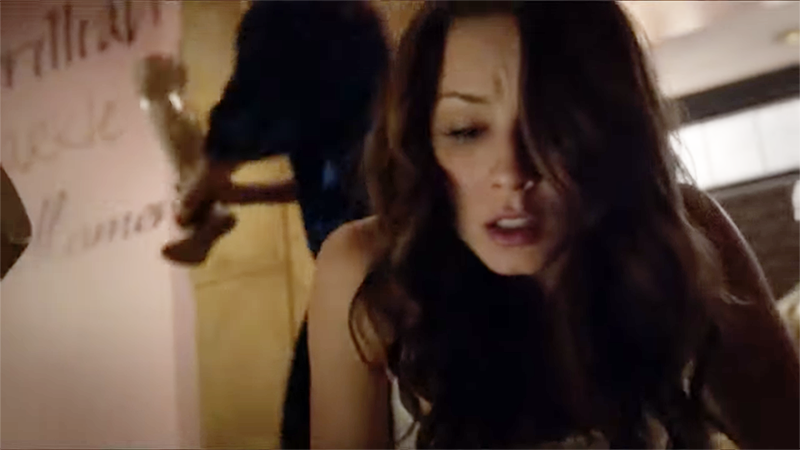 5. Tippi the Bird, Alison’s former grey parrot, who sang a phone number as a clue. The phone number went to a landline in the attic of a sorority house where the witch lived who pulled Alison from her grave the night her own mother buried her alive.

6. Alison stayed alive because she was good at “holding her breath,” something the Liars casually mentioned when remembering the summer she disappeared. “Remember how good she got at holding her breath?”

7. When Emily had to kill her second dead girlfriend’s pretend cousin on top of a lighthouse.

8. When she reminded people of this by literally saying “You may have heard I killed a guy.”

9. The absolutely nonsensical literary references. “Hey Em, you weren’t the only one with great expectations. Check it out. Xoxo.” And “Do it right. I’ll be watching. Just like Tom Sawyer.” And “You can read East of Eden over the weekend for extra credit!” And the literal glasses of Dr. TJ Eckleberg.

10. The fact that Alison got her PILOT’S LICENSE and flew a whole entire plane around the country both before and after she died. Oftentimes while wearing a mask of her own face over her regular face. 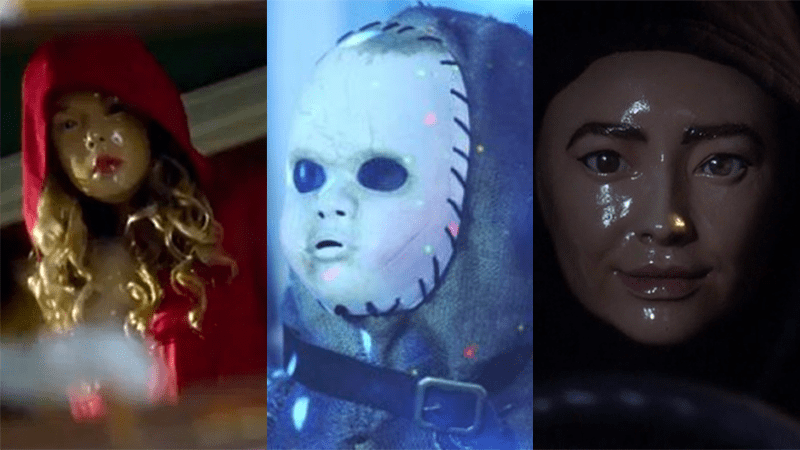 12. One Halloween, Ashley Marin was visited by twin ghosts who may or may not have been the little dead DiLaurentises before they were resurrected.

13. Also on Halloween, on a train, Aria met Adam Lambert and then got locked in a box with Officer Garrett’s corpse. It was a school trip.

14. One casual evening, A drove a whole entire car into Emily’s living room.

15. The time A made Hanna eat a whole box of pig-shaped cupcakes while texting her about her sweet tooth and “OINK! OINK!”

16, And then the time Hanna’s literal tooth had a tiny piece of paper rolled up and sealed inside it, all, “I told you, dead girls can’t smile. Stop looking.”

17. Act Normal, Bitch  — the motto A flashed up on the marquee in Rosewood High school the night the building came to life and tried to murder Emily, before her dad scaled a wall, climbed in a window, and saved her. 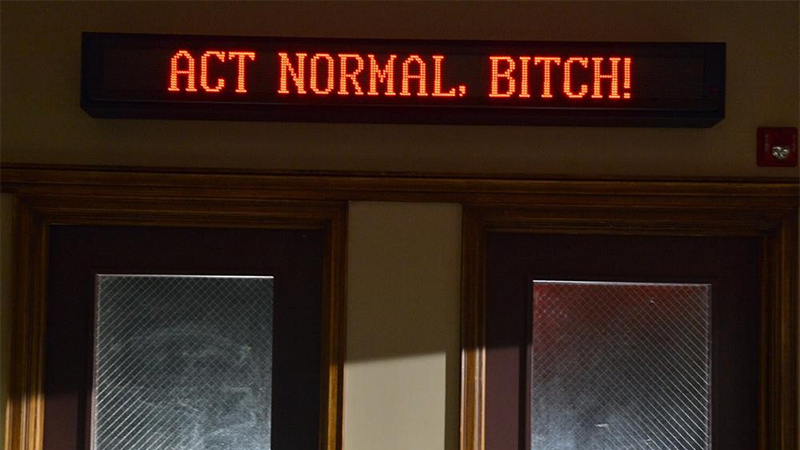 18. “DEAD GIRLS CAN’T SMILE.” (The note from A that came with the NECKLACE MADE OF HUMAN TEETH that supposedly belonged to Alison, her dead ex-girlfriend.)

19. The fact that there were one million barns within driving distance of Rosewood, PA.

20. The fact that every teen was constantly getting murdered and buried in the DiLaurentis’ backyard, but their parents kept going out of town and leaving the home alone anyway.

21. That time A buried a pair of boots that looked like the Liars’ therapist’s boots, and had them digging frantically to save her life (right outside of a barn) — but actually it was just the boots. No therapist was attached to them. 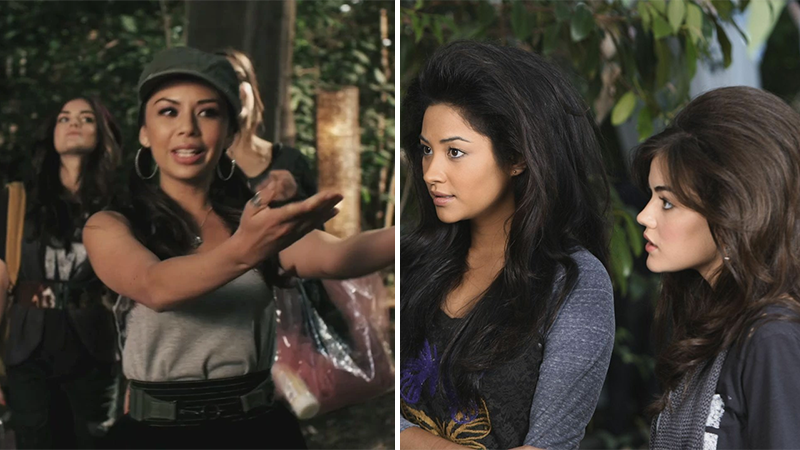 24. Before the show started, the Liars literally blinded one of their classmates. At one point, she got an entirely new pair of eyeballs and could see again. But then those eyes also were sabotaged by the Liars.

25. Ali wore the same dress to her mom’s funeral that her mom wore to her funeral, which does make a weird kind of sense due to them both being buried IN THE SAME BACKYARD GRAVE.

26. At one point, Caleb was living in the literal walls of Rosewood High because he didn’t have anywhere else to go.

27. Which, frankly, is still not as creepy as the place Mona Vanderwaal was choosing to hang out. A place she affectionately referred to as her “lair.”

28. The time Spencer stole some Cheetos from Hanna’s purse to bribe a raccoon. 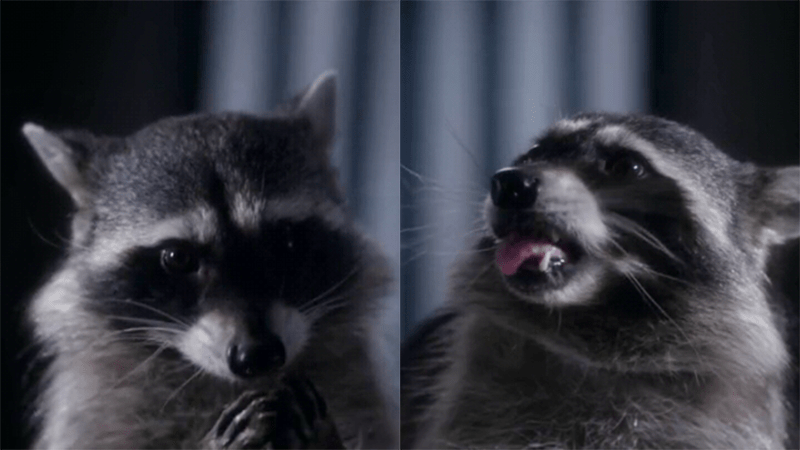 29. NO ONE EVER TURNED ON THE LIGHTS IN ANY ROOM THEY ENTERED!

30. “Call off your techno-boy-toy or I tell the cops what your mom keeps in the lasagna box.” (You know, for when your mom robs the bank she works at and stashes the money in the pasta in your pantry.)

31. “What will you do when the rest of me comes out of the grave?” is the message A sent to Spencer to let her know the wedding dress belt (?) she was wearing while running around in the woods getting caught in bear traps was held together with Alison’s dead finger bones.

32. One time, Emily and Aria went into the woods in the middle of the night to break into the cabin of a man whose literal job was making creepy masks — which he did alone, in the woods, okay — and to buy Aria some time to “investigate,” Emily gave the mask man her perfect face.

33. Every single outfit Aria ever wore. 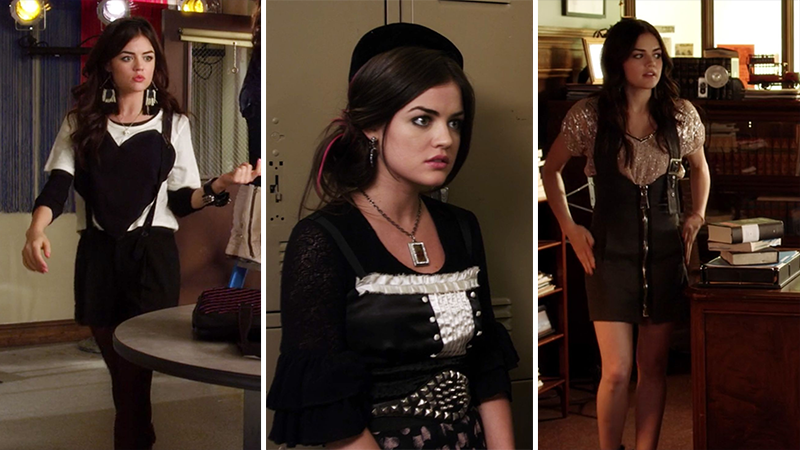 34. After running under Hanna with her car at her own birthday party, Mona — as A — sneaked into the hospital and signed her cast “my bad.”

35. #PoorEzra, a hashtag Freeform tried to make happen for “poor Ezra,” a man who seduced a teenage girl to get information to write his true crime novel about the disappearance of this whole other teenage girl he had also seduced.

38. Alison suggesting there was such a thing as “liking Beyonce too much.”

39. The greatest reveal in the entire series history was when Ezra sent Aria to town to buy a can of chickpeas — and after she left, he opened up the kitchen cabinet, and the music went completely ham, because sitting there, on the shelf, right at eye level was A CAN OF CHICKPEAS.

40. The main thing the Liars kept getting arrested for was owning shovels.

41. The time Nana Marin sang the National Anthem at field day. (Spencer: “Why is your grandmother singing?” Hanna: “BECAUSE SHE CAN.”) 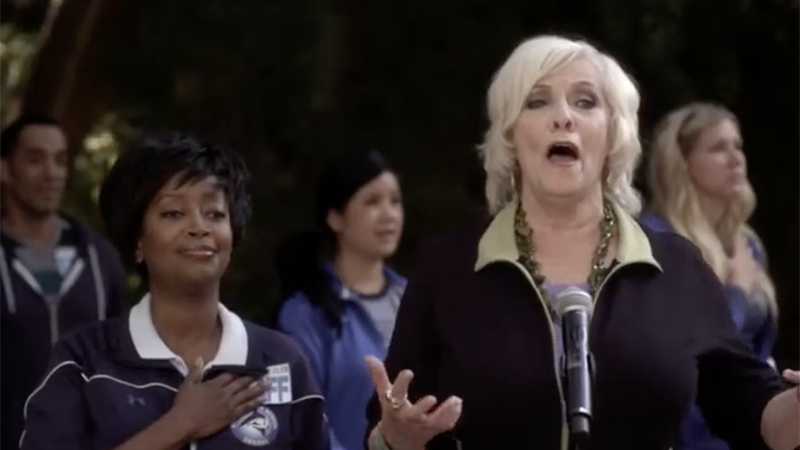 42. So many dolls. Dolls with keys hidden in their heads, dolls wearing little Alison masks, dolls with clues in their stuffing, dolls getting their hair brushed in the basement of the definitely up-to-code town insane asylum, dolls that looked like Bratz of each individual Liar, dolls in bedrooms, and dolls in shops, and dolls in lairs, and…

43. The off-the-cuff code-language Mona made up and used to communicate with the Liars while brushing her asylum dolls’ hair. Miss Aria You’re a Killer Not Ezra’s Wife. MAYA KNEW!

44. Jessica DiLaurentis adopted a dog who dug up her hand that time she got buried in Ali’s old grave in the backyard. 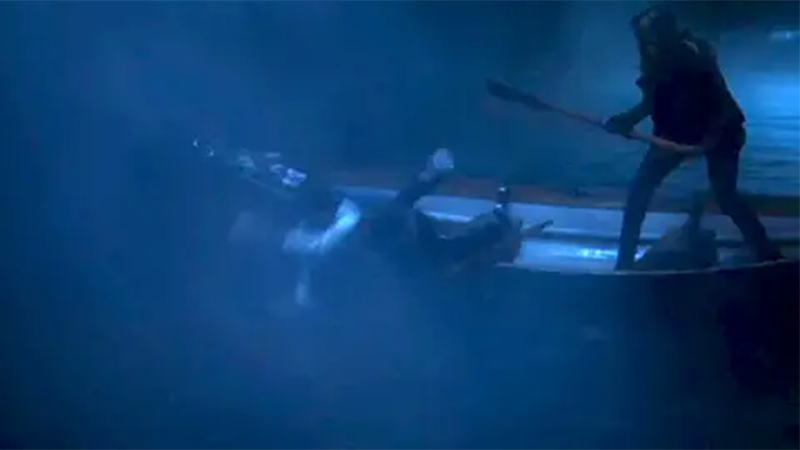 46. The time Aria killed Shana by pushing her off a two-foot tall stage.

47. Shana’s funeral video that included edits for viewing the body from different angles.

48. “Bitch chipped us” is the thing Spencer said when she realized A had, quite literally, put chips in their brains.

49. The time Noel Kahn, that jokester, tripped over his ax and cut off his own head.