NOPE is the third horror movie Jordan Peele has written, directed, and produced within the past five years. Get Out is one of the movies people love to claim as ushering in black horror (though really it’s just a movie that’s provided more visibility for black horror than has been created for decades) and Us is the movie that made everyone uncomfortable as shit with the haunted version of “I’ve Got 5(On It).” Get Out feels like it was made for the community at large with great writing and acting. Us feels like Peele getting to play around with two fears we know he has (dopplegangers and rabbits) and seeing the direct link between two horror movies he admires (The Stepford Wives and Vertigo). NOPE feels like the best of the aforementioned with the additional thrill of not worrying if black people are gonna die by racism, capitalism, white supremacy and all the other shit we have to deal with in real life. Nope. We get to deal with the fear of regular science fictional fucked up shit and it is glorious.

Daniel Kaluyya plays OJ, the eldest of two and a horse wrangler on a big ass plain in California. After his father, Otis Haywood Sr. (played by Keith David), dies in front of him, OJ suddenly has to take on his father’s jobs. This includes horse wrangling on movie sets, where we are introduced to Keke Palmer as OJ’s sister, Emerald, the charismatic little lesbian of my dreams. OJ struggles with his family’s new needs, finding places to loan out horses to cover debts, and convincing his sister to take things seriously. These problems all pale in comparison to something he and some other characters notice one day: one of the clouds does not move and that may be an answer behind what killed their father. 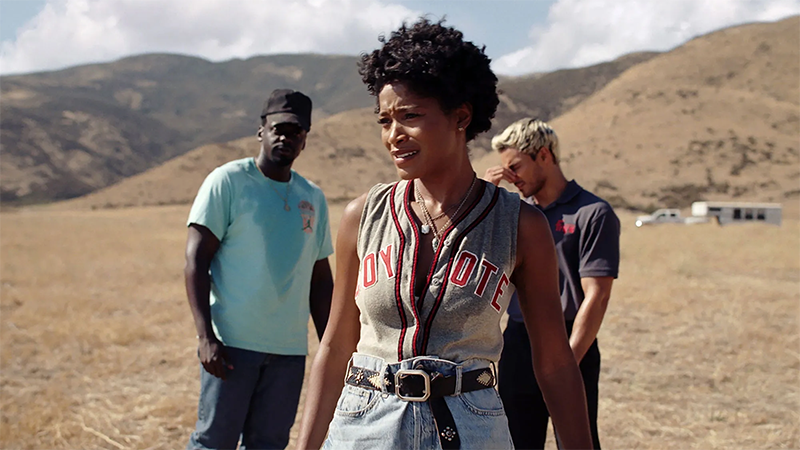 This movie, compared to Peele’s first two, feels like there isn’t anything left over (without intention). It follows Chekhov’s gun at a much higher rate than others: if something is shown in the first act, it explodes by the third. Even when you have to really stop and remember why something on screen reverbs in your chest like a haunted echo, it only takes a few seconds to recall that part of this story was already told to you, you just didn’t know what it meant yet.

It’s personal preference, but Get Out broke my heart when Betty Gabriel perfectly played her part, and no one pushed to see what else she was in this story besides a reminder to Chris of how he failed his mother (who we also do not get to see or learn more about). Us feels like it has a lot more holes (and please! If you know the answers, share them with me, I love this shit!) with an escalator being available to access the tunnels, whole lives taking place in few rooms even though the same people didn’t stay in the same rooms above ground forever, and the ability for others to create and enact on this plan even when tethered (did they plan while the above was asleep?). It’s one of my favorites still, especially because at the heart of it is the missing black girl. How easy it was for her to slip away, how easy it was for her to be forgotten, turned into someone, something else. And how motherhood, especially Black motherhood, exists in a myriad of ways and in the most impossible of circumstances.

In NOPE, the black girl, the black lesbian of all people is not missing. She is miraculously, spectacularly alive — and it is one of the best things I’ve experienced in a really long time.

Emerald is a lesbian. From talking about getting her stuff ’cause her girl said she could stay with her; to telling the woman at the mega-store that she’s looking really pretty today, with a flirtatious smirk; to the characteristic swagger slump she moves in underneath baggy jerseys and shorts and tank tops that show her stomach and match her pink sneakers, she is definitely who you’d swoon at if she smiled your way. Nothing will really prepare you for how much you’ll love Emerald except maybe how much you love Keke Palmer already. 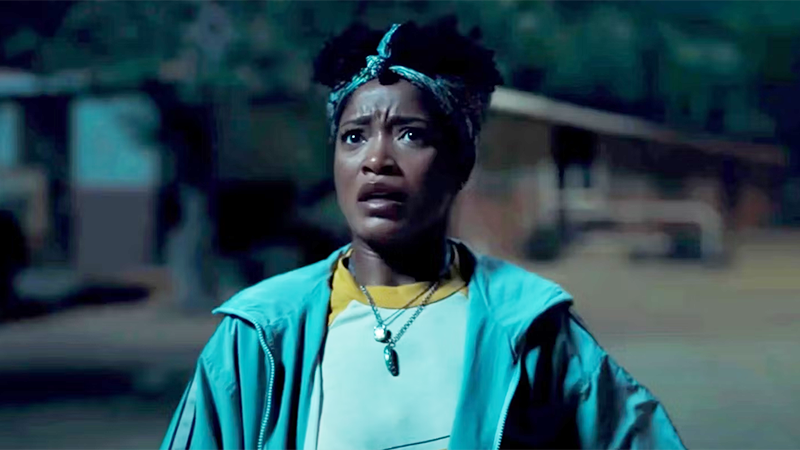 As an unofficial EGOT star in Black households around the world, Palmer has been stunting on everybody and they mama just from acting opposite Angela Bassett and Laurence Fishburne AT AGE ELEVEN in Akeelah and the Bee, alone. She was the first and youngest Black Cinderella on Broadway, the star of one of the most successful Nickelodeon shows, True Jackson: VP, is one of the best interviewers to ever do this shit, and is also Meme Queen extraordinaire. There was no question Keke Palmer was gonna shine in her leading role; the question was whether or not the story would be able to properly hone her light. NOPE doesn’t just do that; it reaches its greatest lengths just so her infinite talent can really stretch its legs out and get comfortable.

Peele uses jarring shots, cutting people off in mid-sentence, but it doesn’t make the story, the characters, the audience stumble. It’s like moving in the dark of your house, with a weak flashlight as your guide. The steps may feel different even though this is an area you’ve tread before. But you don’t know what story your house decides to tell in the dark, when you’ve only got your one foot in front of the other as your sole anchor. NOPE is familiar territory in the horror genre, possible aliens, falling objects, and animals acting weird as shit. Though animals as warning, as monster, as comfort are not unheard of in horror movies, there’s something extremely unsettling in animal not being just metaphor alone in this movie, and, often, carrying the title of all three. But even though it’s familiar, nothing about it feels safe, and you’ll still be thinking about it days after you’ve seen it.

Note: Though I enjoyed the film, I believe the use of a disabled person’s face as possible allusion to horror is grossly used in the trailers. Though the disfiguration is part of the plot, the way this character is portrayed in the trailers is ableist and contributes to the harmful tropes of disfiguration, in itself, as horror.

A. has written 32 articles for us.