Celebrating Pride this weekend? There might just be a ‘straddler meet-up in your area. If not, it isn’t too late to host one!

We’re using Tabby Is The New Cat and fantasizing about a date with Samira Wiley to fill the void after this week’s OITNB bingefest. Drinking and eating these things helps too.

Lego finally has a line of female scientist figures, yay! But sorry gamers, playable female characters in Assassin’s Creed aren’t happening because Ubisoft thinks women are “too difficult to program.” This is the world we live in.

In other news, there’s some new AS merch in the store, these mocktails look delicious and your favorite ABC Family mindfuck, Pretty Little Liars, is back.

On Laverne Cox Returns to “Katie”, Shows How to Do a “Teachable Moment” Right:

The Can Never Say Enough About LC Award to Dialethia:

The You’re Doing It Right Award to paintingatree:

The This Seems Promising Award to Mei Tighe:

On Ubisoft Can’t Have Female Characters Because Women Are “Too Difficult” To Animate:

The Alex Hutchinson Is The Worst Part 1 Award to AnnaY:

The Alex Hutchinson Is The Worst Part 2 Award to Jeanie:

On Dear Queer Diary: A Doodle Is Worth A Thousand Words:

The Drawn To You Award to Shae: 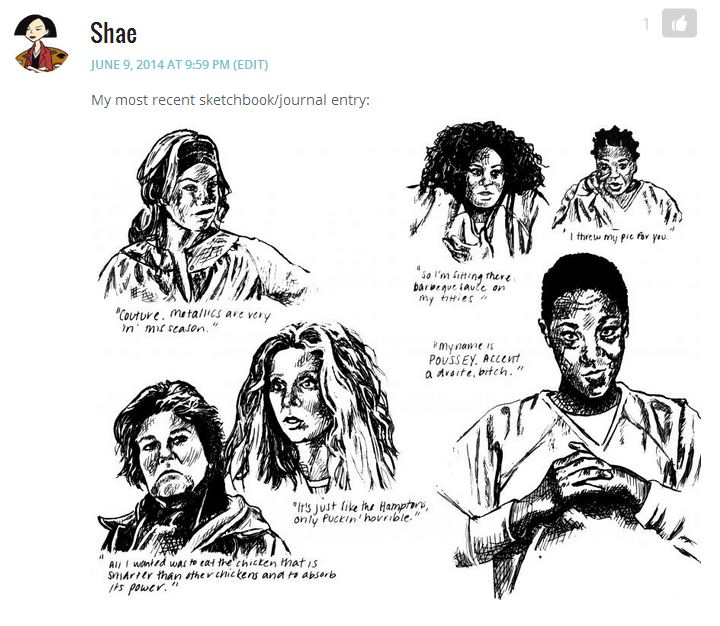