1. Call For Submissions, by The Editors
2. Portraits of Lesbian Writers, 1987-1989, by Riese
3. The Way We Were Spotlight: Vita Sackville-West, by Sawyer
4. The Unaccountable Life of Charlie Brown, by Jemima
5. Read a F*cking Book: “Odd Girls & Twilight Lovers: A History of Lesbian Life in 20th-Century America”, by Riese
6. Before “The L Word,” There Was Lesbian Pulp Fiction, by Brittani
7. 20 Lesbian Slang Terms You’ve Never Heard Before, by Riese
8. Grrls Grrls Grrls: What I Learned From Riot, by Katrina
9. In 1973, Pamela Learned That Posing in Drag With A Topless Woman Is Forever, by Gabrielle
10. 16 Vintage “Gay” Advertisements That Are Funny Now That “Gay” Means “GAY”, by Tinkerbell
11. Trials and Titillation in Toronto: A Virtual Tour of the Canadian Lesbian & Gay Archives, by Chandra
12. Ann Bannon, Queen of Lesbian Pulp Fiction: The Autostraddle Interview, by Carolyn
13. 15 Ways To Spot a Lesbian According To Some Very Old Medical Journals, by Tinkerbell
14. The Very Lesbian Life of Miss Anne Lister, by Laura L
15. The Lesbian Herstory Archives: A Constant Affirmation That You Exist, by Vanessa
16. I Saw The Sign: Queer Symbols Then and Now, by Keena
17. The Ladies Of Llangollen: Runaway Romantics In 18th Century Ireland, by Una
18. 15 Awesomely Named Yet Totally Defunct Lesbian Bars Of America, by Riese
19. 6 Special Ideas About What Lesbian Sex Is, 1900-1953, by Party In My Pants
20. Queering The Library: Collecting Downtown, Riot Grrrl, Feminism & You, by Vanessa
21. Six Ways that 1950s Butches and Femmes Fucked with Society, Were Badass, by Laura

Butches and femmes may have started to get a lot of flack in the ’70s for (allegedly) subscribing to heteronormative roles within their relationships, and nowadays, when I wear my requisite polka-dot dresses and heels, I might feel like screaming, “I’M NOT HER STRAIGHT FRIEND!” to everyone at every gay event, ever. But in the mid-twentieth century, butches and femmes ruled the roost (or at least the dyke bar scene), for better or for worse. They also paved the way for tons of fantastic lesbians, radical queers, revolutionary feminists, and really awful (and awesome) hairstyles that came after them. My thesis? They were totally badass.

1. Butches were butches, femmes were femmes… 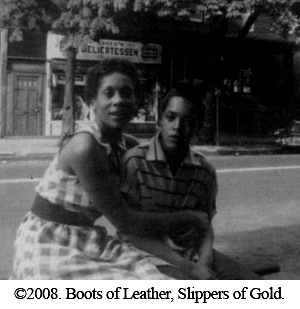 The butch/femme system wasn’t just a sexual preference or a preferred style of dress; in most lesbian circles, it was a social imperative. It was most prominent in working-class circles, where the privilege of discretion was not so readily available as to the upper class; where butches could work in blue-collar jobs that didn’t require them to wear feminine clothing; and where both femmes and their more masculine counterparts tended not to have professional jobs in areas that would require them to project a particularly middle-class brand of moral “purity” (you can read all about this, by the way, in the fantastic Boots of Leather, Slippers of Gold, by Kennedy and Davis, which my girlfriend lent to me and which she thinks I will be returning; she is wrong). Roles were generally fairly rigid, at least at the outset, and at least with the lights on. In fact, many gay women identified as butch or femme before, or even instead of, identifying as gay, homosexual, or lesbian. Butch-on-butch and femme-on-femme relationships were often kept hush-hush.

Personally I tend to cringe at anything that includes the word “imperative.” But the badass part about this? These were females. Women. With enough differences between them to eroticize them. To create an erotic system that was, in fact, all their own, with its own norms, values, and sexual practices and mores. Without Finn Hudson (I mean, dudes). Most butches weren’t trying to pass for men; they were trying to SURpass them. Perhaps even more importantly, a butch-femme pair, arm in arm on the street, was the number-one symbol of lesbianism, and maybe the only recognizable symbol of the lesbian community, of the era. To be butch or femme meant to be recognized by your own people. It meant visibility. It meant that you were known.

Creating your own system has its pitfalls, one of them being that you now have to operate within a system. As per usual, plenty of queer women subsequently fucked with said system, with femmes switching to butch (and vice versa) and back depending on the week, the evening, or the mood. The roles stayed the same (though butch-on-butch relationships, with the tight butch community formed at bars, were not uncommon either), but slipping in and out of them at will revealed their true fluidity.

The gender dance between butches and femmes themselves had its own issues; both sides were prone to jealousy, and, without the legal protections or social expectation of marriage, issues of control and adherence to monogamy abounded. The idea that femmes were passive recipients of anything, though, is verifiably ludicrous. Butches, with their questionable attire and mannerisms, were often under- or unemployed, and femmes often had to bring home the bacon–and many did so, willingly, choosingly.

The rest of the world may have thought butches, with their Duck’s Ass haircuts (no, really) and various manifestations of period male getups, were perverts or cheap imitations of men, but their femmes certainly didn’t, admiring the girls who came in from working on the railroad and at the factory and providing validation for the unthinkable. Femme fashion was closer to straight women’s fashion, with a little (or a lot) more glamour. Looks were important, but in a way that engendered a sense of pride in the give-and-take, unique system that had been created, and in a way that was also, according to my research, adorable. Vic, a butch interviewed for Boots of Leather, explains: 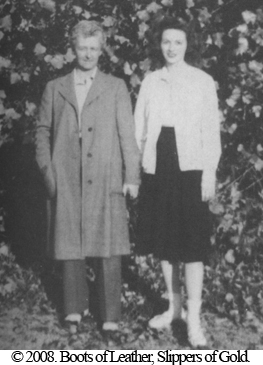 Butches, at the time, were generally assumed to be stone, meaning that they gave pleasure and did the “doing,” without reciprocation in kind from their femme (though, again, behind closed doors was often a different story). This assumption has led to a lot of valid and important discussions about butches and body dysmorphia, sexual repression, and the like, though many butches interviewed for Boots of Leather claim to get all their sexual satisfaction from pleasing their lovers (really, y’all are great). The important part here is that women were enough, in and of themselves. Butch-femme eroticism shattered the illusion that there needed to be a male aggressor or initiator, or that that type of erotic tension couldn’t exist between two women. Femmes, like my personal high femme heroine Amber Hollibaugh, have waxed poetic about finding empowerment by putting themselves into a butch’s hands. Though femmes often made love to their butches as well, or switched roles, many preferred this conscious giving over of sexual power, and found a new kind of enjoyment in the focus on their own pleasure (a phenomenon that was at the time almost unheard of for women).

And you can’t talk about butches without talking about competition, with each other but also with straight men. While historically, straight men had been known to gain authority over their women with violence, butches saw the perceived competition as an opportunity to display their sexual prowess, and prided themselves on it. Society may have not wanted femmes to be in the arms of butches, but they often did when a butch took the time to really learn them, and to get them off–at a time when the (totally insane!) possibility of female orgasm was just beginning to be discussed in heterosexual marriage manuals (often as a burdensome process that required the man to bury his real urges and really, really try to want to give pleasure too, but, you know, baby steps).

Girls who like girls like other girls who can impart knowledge. Butches and femmes were no exception, especially in the area of sex. Jeanne Cordova, author of When We Were Outlaws, has spoken about her own experiences with older butches growing up in the mid-twentieth-century, and how she learned to please a woman. Since femmes didn’t have to adhere to the same social norms as heterosexual women at the time, they weren’t expected to be virginal or inexperienced, nor were they expected to lay back and take whatever they were given. To the contrary, butches were often eager students of femmes as they were instructed on how to best please them sexually.

6. They defended their spaces. And made new ones. 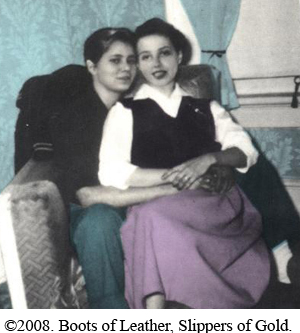 The image of the “tough bar lesbian” may have been limiting in some ways, but it was also, unfortunately, necessary. Violence wasn’t uncommon, especially as suspicion about everyone from Communists to queers began to mount. Butches and femmes alike were not above confrontation to defend their spaces, physical and otherwise.

The “outlaw” status of butches and femmes made it possible to cross boundaries, too, though. Femmes, particularly African-American ones, often served as hostesses for buffets and house parties that bridged the gap between lesbians and gay men. Though full racial integration took many more years, Audre Lorde also noted the willingness of queer women to form new, more diverse spaces for butches and femmes in a time rife with tension:

“Lesbians were probably the only Black and white women in New York City in the fifties who were making any real attempt to communicate with each other; we learned lessons from each other, the values of which were not lessened by what we did not learn.”

Though the 1950s butch-femme scene may have been a veritable gender politics minefield, butch/femme dynamics offered (and offer) a different way of “being” woman, of “doing” female. Butches were not masculine females, women “playing at” maleness. Femmes were not merely the recipients of their desire, or women attracted to other women with a little more swagger (maybe, sometimes) and a few more pairs of slacks (maybe, sometimes) than they. Our language doesn’t give us the words to describe it yet, but Carol A. Queen may have said it best in butch-anthology-extraordinaire Dagger:

“Most importantly, a butch/femme couple is queer…In fact, the more gender differentiation in their relationship, the queerer they are.”