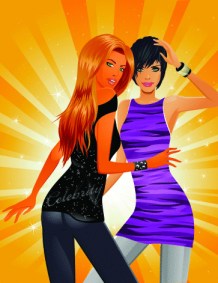 The following terms were listed and defined in the 1989 Alyson Almanac‘s “Dictionary of Slang and Historical Terms.” Most of the terms in the dictionary referenced gay male activities, but there were plenty of special lesbian words I’d never heard before in my whole life and so many words for VAGINA.

1. BAMBI-SEXUALITY: Physical interaction centered more about touching, kissing, and caressing than around genital sexuality. Not to be confused with bestiality, a very different concept.

3. KIKI: 1940s slang for a lesbian comfortable with either a passive or aggressive partner.

4. DESPERATION NUMBER: A sex partner found just before closing time at the bar.

10. DADDLE: To engage in lesbian sex, in a face-to-face position.

13. MISSIONARY WORK: An attempt by a gay man or lesbian to seduce a straight person of the same sex.

14. HOLD A BOWLING BALL: To sexually stimulate another woman by rubbing the thumb and forefinger, simultaneously, on her clitoris and anus.

17. MOLLY DYKE: The more passive woman in a lesbian relationship or liaison.

18. SLACKS: A lesbian. The term is now considered obsolete.

19. TIT KING: A lesbian attracted to women with large breasts.