Since deciding to be a person who mostly eats grown-up food instead of apple-and-peanut-butter sandwiches for six meals in a row, I’ve been trying to find dinner entrees that are (a) easy, (b) pretty cheap, and (c) taste just as good as three-day-old leftovers as they do fresh. This pasta dish falls into all three categories, and is delightfully garlicky to boot.

I’m still not happy with the Swiss-chard-to-pasta ratio, but as a general guideline, use a lot. Really a lot. You just won’t believe how vastly hugely mindbogglingly much you should use. It seems to shrink down from being enough to feed eight people to being a garnish for two in about thirty seconds, so keep that in mind if you are a vegetable person (in the photos I had about one and a half bunches; next time I will probably use three).

Also! The original recipe uses broccoli rabe instead of Swiss chard. It seems to be delicious with either. I used egg noodles as the pasta because the bag was on sale, but any short pasta will work. 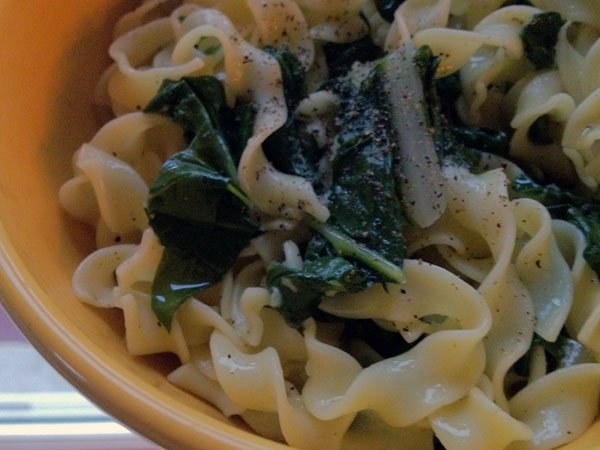 1. Boil a really big pot of salted water. While you wait, wash the Swiss chard, remove most of the stems, and cut the rest into two-inch pieces.

2. When the water is boiling, add the pasta. When it’s five minutes from finished (according to the package cooking time), add the Swiss chard. It will look like too much to fit, but it will start to wilt as you stir. Continue to cook until the pasta is al dente, then drain and add to a large serving dish.

3. In a small pan, cook the olive oil, garlic cloves, and salt over moderate heat, stirring until the mixture turns light gold. Pour over the pasta and toss (if you can’t get it all out of the pan, pour some of the pasta into the pan and swirl it around to soak up the extra, and then toss). Sprinkle generously with black (and if you have it, white) pepper. Serve. 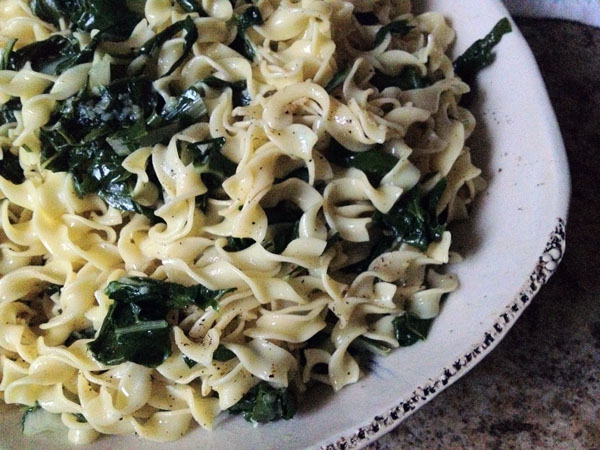 Before you go! It takes funding to keep this publication by and for queer women and trans people of all genders running every day. And A+ members keep the majority of our site free for everyone. Still, 99.9% of our readers are not members. A+ membership starts at just $4/month. If you're able to, will you join A+ and keep Autostraddle here and working for everyone?
Join A+
Related:get baked with autostraddle