You know that feeling you get when so many already perfect things get together to form an even more perfect union, like when you eat a peanut butter and Nutella sandwich? That is the primary feeling I felt when I saw this video of Against Me! singer Laura Jane Grace and Joan Jett covering the Replacemtents’ “Androgynous” at Terminal 5 in New York City this past weekend. 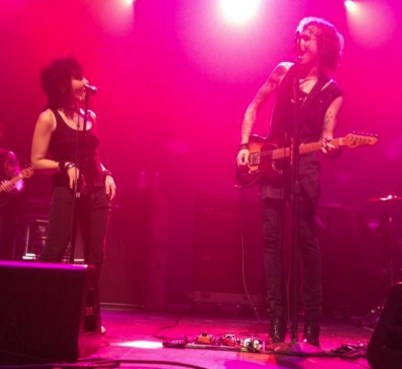 “Androgynous” was a revolutionary song when it was recorded by the Replacements for their 1984 album Let It Be and it was still revolutionary when Joan Jett covered it in 2006 for her ninth studio album Sinner. But, as Slate noted, with trans punk rocker Laura Jane Grace singing lead, the “song never felt more prophetic than it did this past weekend.” Seriously though, watching Grace scream out the lyrics, “she’s happy with the way she looks/she’s happy with her gender,” makes me feel like the world is just a little bit righter. As in correcter. See for yourself:

And if you haven’t already read the full text of Grace’s coming out article in Rolling Stone, you should really do that.