It’s the question on every lesbian’s mind: which straight woman will earn the coveted honor in 2010 of appearing on the cover of the Out 100 People of the Year? Who, in the year two-thousand-and-ten, will follow in the prodigious footsteps of previous Straight Female Cover-Stars like Cyndi Lauper (2009), Katy Perry (2008), Jennifer Hudson (2007) and Mary Louise Parker (2007)? 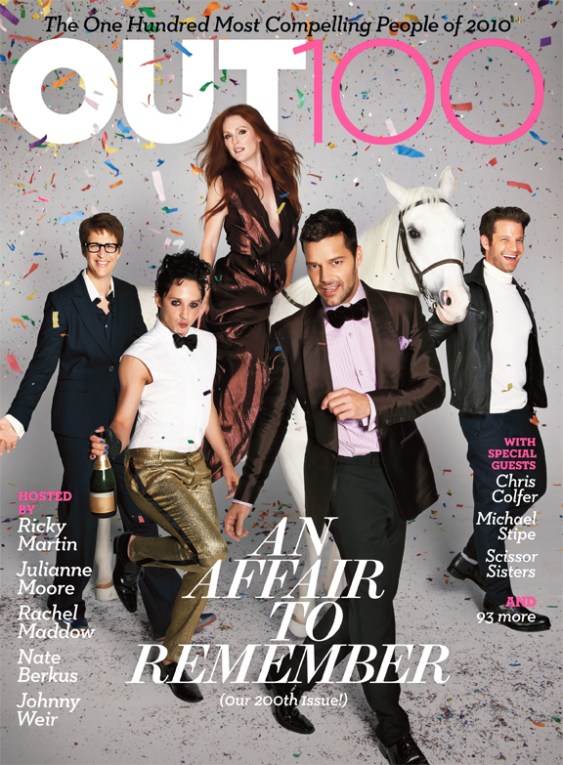 For 2010, OUT really outdid itself by adding a real-live lesbo to the cover — and not just any lesbian, but the lesbian nearest & dearest to my heart — Rachel Maddow! (Also, HAY JOHNNY WEIR)

I was going to write the obligatory “bitching about how OUT’s list is 95% men” post, but you know what? I don’t care. OUT is a magazine for gay men. It’s a national monthly glossy magazine with award-winning authors, big name advertisers, occasional acts of investigative journalism and an evolving and impeccably maintained website. Why do they have this fancy list in this fancy magazine with big stars and professional photographers photographing dozens of men who appeal to the men who read their magazine? Because gay men are willing to pay for things and you, my sisters, are not. (Except for everybody who gives money to Autostraddle or buys a calendar. You’re the good kind of lesbian/straight person/banana.) Apparently gay men are interested in expensive watches. I subscribe to OUT. When was the last time you bought an expensive watch. You just use your phone, dontcha.  Also, GO! Mag makes a 100 Women We Love list every year and it features 100 women and one of them is me and another one of them is Julie Goldman and another is Miss April, so go read that.

So, the Out 100 has debuted, according to 17 emails I’ve received from various PR agencies today. Now let’s discuss some of our favorite persons on this year’s list! 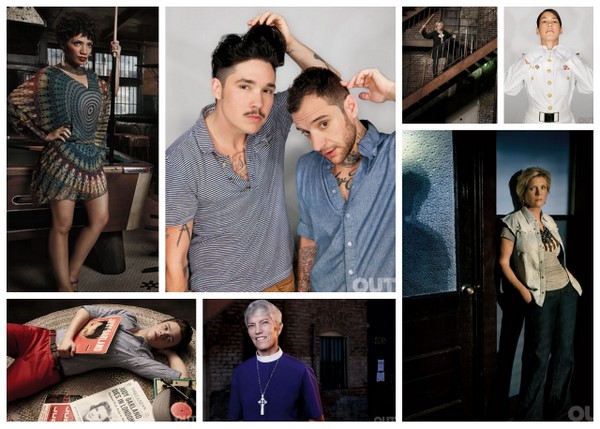 You know how every year we get like 6 or 7 more hot young cute lesbians on our proverbial radar? That was Jasika Nicole this year. We’ve never seen Fringe, but we sure do like her face.

“Fancy hotels, skimpy bikinis, giant pool parties—Mariah Hanson’s the Dinah could easily be described as spring break for lesbians. But the producer behind the annual Palm Springs, Calif., gathering sees it as more than that. “I want it to be the most amazing, show-stopping, mind-boggling, blockbuster event that one can imagine,” she says of the bash, the largest of Club Skirts Dinah Shore Weekend. “I think lesbians deserve it.”

Jerry Maguire’s got nothing on Katie Miller’s resignation letter : “I am unwilling to suppress an entire portion of my identity any longer because it has taken a significant personal, mental, and social toll on me and detrimentally affected my professional development. I have experienced a relentless cognitive dissonance by attempting to adhere to §654 [colloquially known as “Don’t Ask, Don’t Tell”] and retain my integrity, and I am retrospectively convinced that I am unable to live up to the Army Values as long as the policy remains in place..”

Katie went to the VMAs with Lady Gaga and has also been a repeat guest on The Rachel Maddow Show and is studying political science at Yale University.

Sometimes when I watch Glee I feel like, I wish Kurt had gone to my high school, I feel like we could’ve been friends.

Meredith Baxter came out in December of 2009 and the world was super happy to discover that Mama Keaton is a lesbian! Also, she’s a graduate of the boarding school where I had my first girl-on-girl experience so I think that’s important.

This year Mary Glasspool became the first elected openly lesbian bishop in the Episcopal diocese and the second openly homosexual Episcopal Bishop. The first, Gene Robinson, recently announced his intent to retire early due to the emotional toll that being an Openly Gay Bishop has taken on him and his partner. 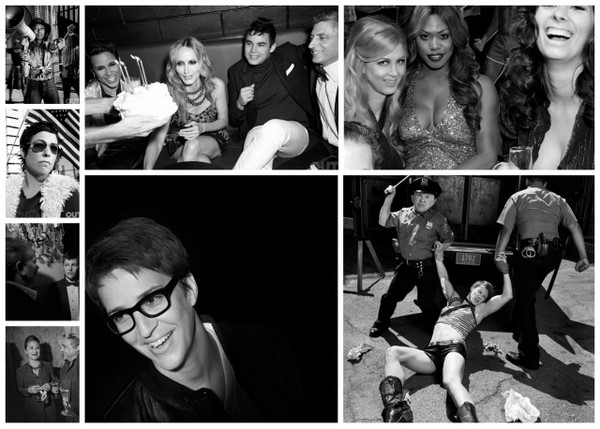 Heather Cassils made out with Lady Gaga in the prisonyard in Telephone and also has a whole career and life that has nothing to do with Lady Gaga but something to do with bodybuilding, Movement Research, Greek mythology and Art. Cassils says things like “My body is a complete construction. When you can present people with an image of something that’s ‘other’ — something in between that doesn’t have binaries — it offers them more options.” We don’t know what she means by that but it sounds sexy. Like Judith Butler sexy.

Chely Wright, The Woman Who Came Out on Cinco De Gayo, told Out, “I need to show folks how low I got — this was do or die for me.” I read her book, Like Me, and liked it Taylor read it too in a Barnes & Noble in Kentucky, all in one sitting, and then she went on to a bar to drink and cry for four hours. This all happened before 5pm. You should read it.

She made The Kids Are All Right, which changed lesbian culture everywhere for everyone.

When Jennifer Knapp came out this year, we knew we had a good one on our team. She’d stopped recording or performing for 8 years while living in the closet and then decided to come back gay.

Chris Pureka makes me cry real girl tears all the time, I can’t even talk about it. 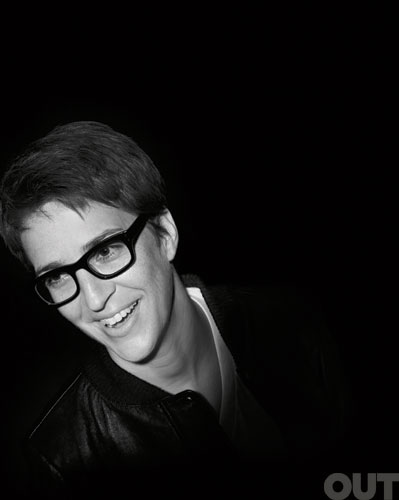 Let’s not mince words: there’s nothing I can say about Rachel Maddow that you don’t already know. But right now I’m watching this video of her interviewing John Stewart uncut and it’s really good. That’s your Rachel Maddow news for the day.

Also, here’s some new names we noticed on this year’s list that we didn’t already know about, but should defo start knowing about:

Okay, look at that photo of Rachel Maddow before you go to sleep and dream about 100 people standing in a circle eating cupcakes and singing “We Shall Overcome.” Okay good. Happy Friday night!