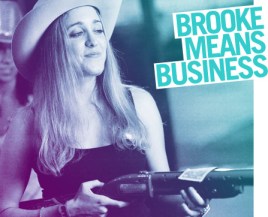 Autostraddle Chief Operating Officer Brooke Levin loves talking business. She talks business to sleeping interns, doormen, and strangers in bars. She talks business in a box with a fox, in a house to a mouse; here, there, and everywhere. While the rest of Team Autostraddle is transforming xeroxed copies of our favorite poems into magazine-construction-paper collages, Brooke is talking business. More or less to herself.

See, women are 57 percent less likely to become entrepreneurs than men, which means it can be lonely out there for a lady seeking participatory conversation partners. In 2006, there were only ten women running a Fortune 500 company, and onl 20 in the top 1,000. Furthermore, gay women specifically face unique challenges in the marketplace; combating sexism, homophobia and often also racism.

But that’s changing. Women are rapidly catching up. Between 1997 and 2006, businesses fully or majority women-owned grew at nearly twice the rate of all U.S firms. In “Brooke Means Business,” Brooke (and occasional guest-bloggers) will be talking to role models and trailblazers prepared to speak about added value, executive summaries and double bottom lines.

This is the future of women in business — the big dreamers, the moneymakers and the social changers… I hope you’re paying attention.

For Mariah Hanson’s 21st birthday, she managed to talk the Dorm Dean at her college Somona State to throw a party in the student cafeteria. She promised there would be no liquor or dancing, then proceeded to set up kegs & cases of Pabst Blue Ribbon & Lone Star Beer and booked three bands to play. Though Mariah wasn’t kicked out or punished that year (just reprimanded), the following year she was only permitted to throw a small get-together in the on-campus coffee house. She promised not to misbehave. But she just couldn’t help herself. The party was ultimately closed down by campus police. And the rest, they say, is history…

Because all these years later, Mariah is the well-known lady at the helm of the year’s largest lesbian party in Palm Springs, California: Club Skirts Dinah Shore Weekend. 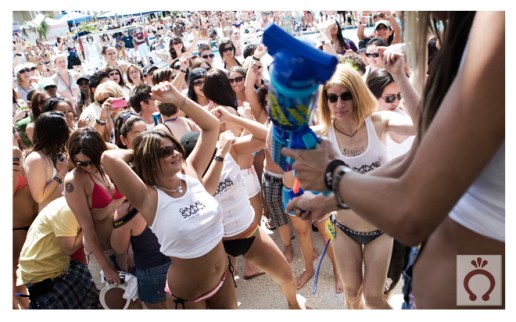 Mariah debuted Club Skirts in 1988 as a Sunday night dance club event in San Fransisco (this is before The L Word or Sex and the City was on, so Sundays were HOPPING) and then expanded to host Saturday night party The Girl Spot. Next up was Northern California, where the “mini-Dinah” event Club Skirts Monterey Women’s Festival inspired women to dance and yelp for seven prosperous years. Her last pre-Dinah-only venture was The Cherry Bar, an all-homo spot in San Fran which she sold in 2006 to focus just on the Dinah. 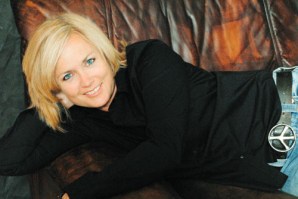 She produced her first Dinah Shore Weekend in 1991 She booked entire hotels to ensure they’d be 100% lesbian occupied (that makes it way easier to have sleepovers p.s.), she brought in national sponsors and incredible talent.

Mariah also gives back as a member of Equality California‘s board and the “Women’s Night” committee for the Los Angeles Gay & Lesbian Center, as well as supporting the San Francisco Gay and Lesbian Community Center, GLAAD, National Center for Lesbian Rights, Jon Sims Center, The Ladies Philharmonic and many more. This year Club Skirts is bringing the NoH8 Campaign to The Dinah.

Brooke: What was the impetus for launching your business?

Mariah: Well, I threw really amazing parties in college! They banned on-campus parties at Somona State because of me. True story.

Brooke: Congratulations, by the way.

Mariah: Thank you. I actually am proud of that. But the stimulus for starting it was just going out. After having dabbled with it in college, I noticed that the scene was really fragmented and I never really understood how clubs at that time — 22 years ago — really embodied our community. It may not be so true today, but back then that’s where [lesbians] met, that’s where we connected, that’s where we met our girlfriends. Night clubs would be really segregated, and then I kind of threw an event that spoke to women and brought people together.

Brooke: You were able to bring in all facets. That couldn’t have been easy.

Mariah: Absolutely. You know, there used to be a lot of polls in my night clubs, and one third of the crowd liked hip-hop, one third liked house, and one third liked Top 40. Some fringe elements voted for country and western or hard rock. But that means that any song you play, two thirds of the club doesn’t like it.

So when you’re dealing with women and broad demographics, you really are trying to be all things to all people. You’ll hear people say, “You can’t do that,” and I think you can try. And I do.

Brooke: How did the organization grow? Were there barriers you encountered that were harder to overcome than others?

Mariah: I don’t believe in the word ‘no’. I don’t think it exists. I think you can make anything happen if you put your mind to it, and I think there are lots of different ways to make things happen. As long as you’re maintaining a high level of integrity, you should apply any approach you can. For me, when I approach business, I approach it on an individual basis with who I’m speaking to. 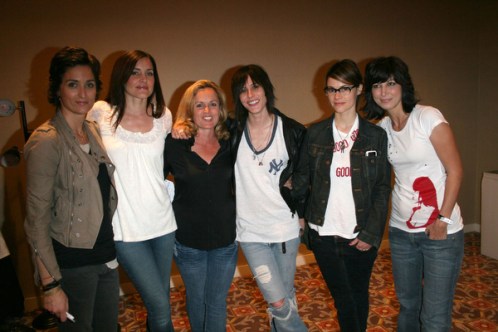 Mariah with the L Word Cast at Dinah Shore

For example, I remember negotiating a contract with a night club owner that — I was actually buying a night club — and the guy I was negotiating the lease from was part of a very patriarchal culture, so I was getting nowhere. I ended up talking to a male friend of mine, and I said, “Can you come negotiate this contract for me? This is what I want.” So my friend came in, sat next to me and negotiated everything I wanted, and all of a sudden, this guy’s saying yes to everything.

Okay now, a lot of women might look at that and think, “That’s fucked up,” but I don’t see it that way. I got what I wanted in the end, and if I had to be creative and put my ego aside to get it, I’m ok with that. I wasn’t there to teach this guy a lesson or change him.

Brooke: Right, you weren’t there to change him.

“Your events aren’t about you. They’re really about your customers. These are things that, being a woman, I think about more than maybe a guy would. I feel very activist about what I do.”

Mariah: But what I did was I accomplished opening a lesbian night club. A club operating seven days a week in San Francisco. That, to me, was the most important objective. So if it meant me sitting back and being a docile business person for five minutes, then I could do that. I think when you’re looking at things very rigidly like, “I will not bring men to negotiate contracts,” well, then, you’re going to have a harder time in business.

Brooke: A lot of women in general sit there and think there are so many disadvantages to being a woman in business, and I wanted to know what advantages have you found to being one?

Mariah: I think it’s an incredible advantage. And I like being a woman in business.

Brooke: Me, too! Exactly.

Mariah: I feel like women and men are really different, and I approach my business with a lot of heart and a lot of “bigger picture.” I think what I do is very community based, and so that’s something that is always in the forefront. I think a lot of people can get caught up in their egos, and we all have them, but your events aren’t about you. They’re really about your customers. These are things that, being a woman, I think about more than maybe a guy would. I feel very activist about what I do. 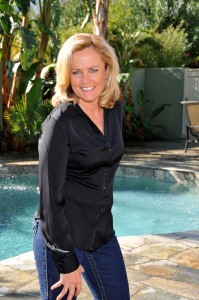 At my events, we treat everybody like they’re equal the minute they walk in the door. My company connects with the customers. We treat them very well. We make them feel like we’re happy that they’re there, and we appreciate their business. It’s a sincere angle, but it’s also a successful one because that’s what people want when they go out: they want to be treated special.

Brooke: Do those traits embody you? Because I know often, when one launches something, it takes on their personal traits.

Mariah: I tell all the younger promoters, attitude starts at the door. It starts at the top. So however you are, that’s how your staff is gonna be. If you’ve ever walked into a night club and the bouncer’s a jerk, the cashier’s rude, you try to get a drink and the bartenders are assholes; I mean, that’s the style. I’ll bet you my business that the owner of that club is an asshole, and that’s why the staff thinks they can be that way. I don’t hire people like that. They don’t get rehired if they act like that. If I can approach my business with a certain level of humility, so can my staff.

Brooke: There’s a stereotype that lesbians are cheap. You obviously don’t believe that at all. How do you combat this stereotype?

Mariah: Women are very conscious about values. I think in this day and time, people in general are. If you’re a business, your bottom line should be about as lean as it possibly can be. You should be putting every extra cent into making sure your customers feel like they’ve gotten the best value for their dollar. The smart business person is saying, “I’m going to make a little bit less and give a little bit more because that’s what customers are responding to.”

Brooke: If you had a piece of advice for women looking to launch their own company or just enter business world, what would it be?

Mariah: One of the key beliefs that anybody should have in starting their own business is the word “no” should not be part of their vocabulary. It shouldn’t. Anything is possible. If you have a goal, you get there any way that you can, but you can get there. If you’re told “no,” you just have to ask the question a different way. Whatever you want, just keep on asking for it in a different way, and you’ll get it. When those doubts start kicking in, meditate, or take a deep breath, or have a drink. Do whatever you need to do to get refocused and back on track. But you have to wake up every day knowing that you’re going to be successful.

Brooke: Do you wake up every day loving life?

Mariah: I do! And I feel successful even in my failures. That’s another really important point: there’s a lot to learn when you lose. It makes you stronger. I don’t think I’ve ever failed. I’ve definitely learned a lot along the way, but I think that has a lot to do with your attitude, too.

Brooke, a Miami native, started her first business at the age of 19 while an undergraduate at Duke University. She enjoys trending topics, double bottom lines and talking to strangers.

Brooke has written 3 articles for us.