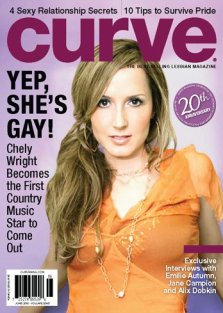 IT’S CINCO DE FUCKING GAYO Y’ALL! And Chely Wright is super-busy today. Unfortunately, Brett Michaels turned out to be the person coming out on the cover of People Magazine (not as a lesbian though, but as “alive.” I still don’t know who Brett Michaels is, so perhaps I’m being insensitive ((likely)), but I like the bandana!)– in fact, Chely Wright’s story didn’t even make the sidebar-blurb area which is inexplicably consumed by Halle Berry‘s breakup, Alexa Ray Joel‘s depression, and the pressing question “can Jesse James win Sandra back?” We think the answer to that one is pretty f*cking obvious, but who are we to question the motives of the patriarchy and their propaganda/magazines.

Much like the homosexuality that Chely Wright kept hidden inside her all her life, Chely Wright’s story is buried beneath the voices of others. Luckily we have a “radar” for this kind of thing and have extracted Chely Wright’s truth from the middle of People Magazine. Now she can shine in all of her hot, cool, sexy lesbian glory! You should also check out People’s online coverage of Chely on their website.

You can also check out the sneak-peak of Curve’s June cover story on Chely, with excerpts from the story (you can pre-order the issue online if you want!) online, like this one:

On losing the love of her life: “Can you imagine being someone’s partner and having to be a secret?  You know, it’s really hard, it’s incredibly painful. And this was the love of my life, and to this day I struggle. I mean, I lost her because of it. I realized I had painted myself into a corner. I had amassed relative wealth and success and fame and I was doing everything I ever said I wanted to do and I realized [after the breakup] that none of it matters. I realized I would rather work in a grocery store bagging groceries and live in a crappy little apartment with my partner. I would rather have love in my life than any of this—and I lost it all.”

Chely Wright’s book, Like Me: Confessions of a Heartland Country Singer, is actually really awesome. Watch this spot — we’ll have more about the book when we finish reading it.

Also, there’s an amazing Interview in Entertainment Weekly that might make you cry and also smile and feel overwhelmed with joy.

In the meantime, you can read what Queerty says about her story and its importance and why this morning’s coming out interview is “pretty awesome.”

Join A+
Related:chely wrightcincodegayocoming out a little laterThis Is A Coming Out Post