Hello tortilla makers! How are you? I just took a bath because I felt like napping but didn’t have enough time to actually sleep. Many things happened this week including but not limited to two playlists, one about the revolution and another of really super cover songs. Some of you won the pumpkin thunderdome, Carolyn made roasted red pepper sauce, and Julia cooked chilli eggplant and tofu. We’ve got 50 pictures of Rachel Maddow, this week’s televisionary caption contest, and Unicorn Plan-It t-shirts for you to wear. We like you even though you need help, we’re looking for 2013 calendar girls, and now is high time to get to 2012 calendar. Now let’s talk to Brianna about the group of the week:

Obviously. It’s Veterans day! (It’s also my grandmother’s birthday and the one year anniversary of the first Boston Autostraddler meetup. The more you know.) It’s unlikely that many of you are veterans, but I bet you’re either in the military/know someone in the military/glad DADT is dead, so!

On “Commitment Campaign”: New Game Plan For Making Straight People Like Us:

The Surprise! Award to E: “Your ads are so effective. I’m going to ask out my prom date by throwing a blanket on her.”

The Science Award to terracottatoes: “too late i already printed out your thumbnail enhanced it a la csi entered your pupil signature into the database and now i know your mom’s maiden name and your aunt’s social security number, i also printed it out 366 times and pasted it into every tiny daily square of my 2012 calendar. oh and i also made a desktop background on microsoft paint with idiotic little writing on it circa 1999.”

The Swag Award to Luna: “Also, y’all have NO IDEA how my life was made when people in the clubs/at pride parades were so COMFORTABLE complimenting me in PERSON on my fucking awesome ass 12 months of the year afro because they had already salivated over my strands via this website.
I mean really. Autostraddle helped me to get a lot of ass this year. And I gave full credit to the calendar. Shit. March was a great month.”

The We Know Award to Maryann: “Try greasing your peppers with an oil that has a high flash point before roasting them. Might help them to not catch fire. See also: highly refined oil. None of this super-smoke-ridden-sets-off-fire-alarms-with-oh-god-burning extra virgin business. If you’re working with something that hot, no virginity can be involved.
If you know what I mean.”

On 50 Pictures of Rachel Maddow:

The Bringing It Back Around Award to wasteunit: 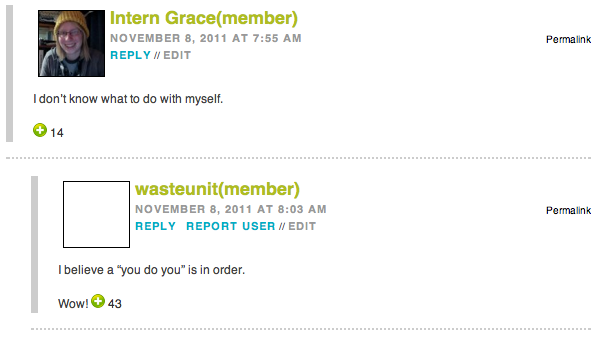 The On Your Brain, In Your Pants Award to Arianna: “I’m looking at these photos in a neurobiology class called Sex on the Brain. I am counting it as classwork because sex is now definitely on my brain.”

On What Are You Listening To? There’s a Drink for That.:

The My Konstantine Award to Christina: “This one may be my favorite:
“THE SOMETHING CORPORATE”
8 oz. Tears
Serve neat. Stir quickly.”