When I tell people about my somewhat laughable inability to cook things due to always lighting them on fire, roasting red peppers are the reason. That being said, this sauce is so delicious that the risk of fire is worth it. Try it over pasta, zucchini cut to look like pasta, or straight up over toast. 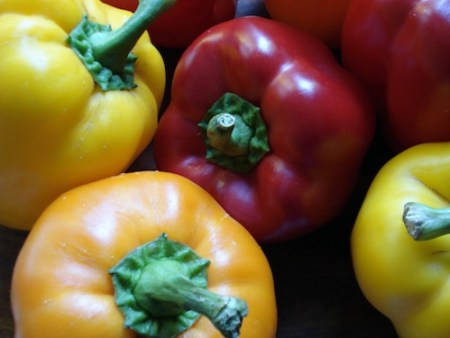 Anyway, roasting peppers makes them sweeter, juicer, and easier to peel, so start by preheating your oven to 425°F.

Line a baking sheet with foil, shiny side up. You may be tempted to use parchment paper. Resist this temptation. Parchment paper is really flammable.

Place the peppers on the foil, and bake for 30 to 40 minutes, turning them every 10 minutes. Do not set the oven on broil. Do not put them too close to the burners (this is key). Also: do not panic if they inadvertently ignite. Happens to me every. Single. Time. 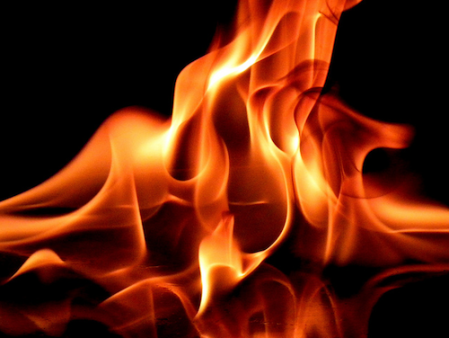 Also: the reason there are no “completed” photos for this post.

They will look a little charred (or a lot charred) when they’re done. Then put them in a bowl, cover the bowl with an upside down plate, and let ’em sit for half an hour.

2. Holding the peppers over the bowl, remove the skins (you will probably be able to use your fingers) and seeds and throw them out. Strain and set aside the juice. Dice the peppers.

3. Heat the oil in a saucepan over medium heat. Add the onion and cook for five minutes. Add the garlic, and cook for about 30 seconds. Add the diced peppers, basil, and red pepper flakes. Pour in the juice from the roasted peppers, and bring to a simmer.

4. Cover and simmer for 15 minutes, until everything is tender and soft. If there’s a lot of liquid left, uncover the pan and continue to simmer until there isn’t any left. If you used a basil sprig, remove it. Remove from heat.

Makes about two cups, and keeps for up to two weeks in the fridge if you pour a film of olive oil over the top.

Adapted from Martha Rose Shulman in the New York Times.