Hello friends and lovers. Did you have a good fourth of July? I’m asking this to all of you because the fourth of July happens everywhere, not just the U.S. It is, after all, a date. I saw appropriately knee-high corn, read about privilege, and got a fantastic sunburn. I don’t know what Canadians do on their independence day, but I think I could handle 50 pictures of Ellen Page becoming a yearly tradition. On the first of July, we had formspring Friday and you guys basically solved everyone’s problems. On other days in July, Riese recapped The Real L Word and Pretty Little Liars. On a day before July, Laneia had a sing-along to Dazed and Confused only instead of singing, she cooked. In other cooking news, Lesbians like granola. All right, let’s check at the kickASS group of the week. (Yeah, I stole that from The Soup).

It’s become obvious to me that you all love board games. You really, really love them. Fortunately, Allie made this group for you where you can organize amongst yourselves to get together and play Pictionary online. You can play all the board games on the internet, without the crippling social anxiety that comes with meeting people in real life! Though you can and should do that too.

On Formspring Friday: Even Brighter Than the Moon:

The I Think That’s Called “Finger-Bopping” Award to terracottatoes: “so wait that english girl who used only her pinky wasn’t just being extremely polite? she’d f-banged nine other homogays? d
damn. slow your roll.”

On Movie Night: Dazed and Confused:

The Taking DIY to Heart Award to kat and lilyv: 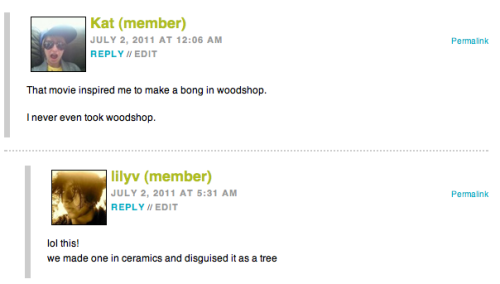 On And On the Sixth Day, Obama Made News on Same-Sex Marriage:

The Here’s Your Chance Award to Po: “is there any reason (besides this being a super important and relevant news piece, and all) that we aren’t making a joke about her last name. i am too inebriated to think of a good one, but someone, please do”

The Yeah, She’s Talking About Rugby Award to Maggie: “It’s basically like the Women’s Studies course of the sports world”

On We’re Celebrating Something for Sunday Funday!:

The Encyclopedia Brown Award to A Biased Person: “Fact: Visiting Wesleyan > Visiting Yale.
Also, I am re-watching old Glee, and Kurt looks so good in periwinkle(This is also a fact.). I want him to be my cousin.”

On Independence Day OPEN THREAD: Like Sparklers For Your Heart:

The Best Day Ever Award to wasteunit: “I’m a park ranger, so the 4th of July and I are not friends.
My weekend so far:
– Woman who claimed that her lovebird is a service pet. What service do you provide, bird? What service?
– Man who told me to go fuck myself because directions involving three left turns are too hard.
– 15 year old boy who had his right nipple bitten by a fish. It was bleeding.
– Anti-Islamic man who said (while holding a guide to understanding the bible), “Are they (pointing to a group of Muslim people) allowed to be in the campground with the rest of us? I don’t want to camp here again if they’re going to be here.”
– 5 year old boy with an allergic reaction to “shrimp on the barbie.”
I’m about to go to work. I hope I survive the day.”

On The Gay Bar: Where Hopes and Dreams (and Bathroom Hook-Ups) Come True:

The M.A. In Marketing Award to Arls: “Girlspot bar? Let me guess: “The G-spot: if you can’t find it, you can’t come””

On “Blue Crush 2″ Is a Horrible, Wonderful Movie:

Yes, I’m Giving An Intern An Award on Her Own Article to Intern Grace: “I would put it somewhere between “Rubber,” which is the story of a homicidal car tire, and the music video for “Who Let The Dogs Out,” if that’s helpful.”