Jeez, what does an American have to do around here to get a freakin’ day off so we can drink some beer, grill some animals and light some damn explosives?! Ugh, you know?

Look, I’m gonna be honest: I’ve tried to write this post for about three hours and it’s officially become impossible to talk about this holiday, either sarcastically or sincerely, because it seems like every American holiday is so problematic w/r/t origin and commemoration and it’s like, I just want an open thread with pictures of fireworks. 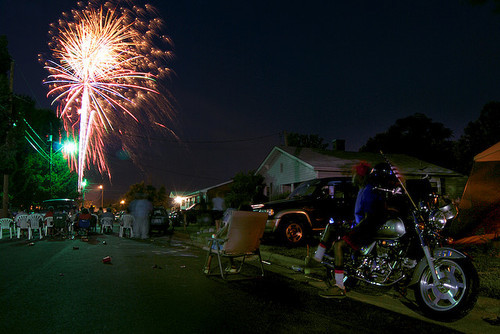 And I was going to complain about how much food we consume during national holidays and how each holiday is more or less just an excuse to eat 7,000 calories in one meal, but you already know this, so I’d just be doing that thing where a person of privilege apologizes for the privilege but then eats two cheeseburgers later.

But I don’t like loud explosions and any sort of gloating, self-important national sentiment makes me a nervous wreck. I know that this is about pride for one’s country — patriotism? — but I don’t understand pride at this level. I get the concept of pride as it pertains to groups that have faced decades or even centuries of oppression and hatred, but I can’t wrap my head around the outwardly boastful sort of pride portrayed on days like this.

HOWEVER, that’s just me and my own little brain! Your brain is probably different and holy holy holy, that’s why there are so many of us — so we can feel all the feelings at once! I love you. I have a drink recipe to share with you, so that we can all forget about Sacajawea, Chinese explosives and embellished stories of Boston harbors for a minute and just get wasted. It’s a watermelon martini and you’re going to fucking love it / me. Let’s not fight.

Cut or rip the basil leaves into itty bitty bits. Put all of the ingredients into a shaker and shake the living hell out of it. Ok now stop. Strain everything into a chilled martini glass or, if you’re accident-prone, a plastic cup from the kids’ meals at Red Lobster.

Garnish with your lips. Repeat.

You probably have things to say about your day / life / family / lack of / cheese and cracker situation / the merits of the Roman candle and we encourage you to do just that! Right here!