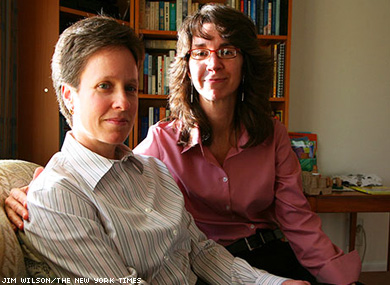 The Obama Administration filed a brief Friday in Federal court in San Francisco in support of a lawsuit filed by a lesbian federal employee which claims the government wrongly denied her spouse the health coverage she should have been entitled to as a spouse. This “strongly worded legal brief” says DOMA was motivated by “animus” against the gays and is therefore unconstitutional.

Tobias Barrington Wolff, a law professor at the University of Pennsylvania, told the press that “though the administration has previously said it will not defend the marriage act, the brief is the first court filing in which it urges the court to find the law unconstitutional.”

“This brief represents the concrete manifestation of a complete paradigm shift in the federal government’s position on anti-gay discrimination and the constitutional rights of married same-sex couples.”

Unlike in other cases where DOJ has stopped defending DOMA in accordance with President Obama and Attorney General Eric Holder’s decision that Section 3 of DOMA — the federal definition of marriage — is unconstitutional, DOJ lawyers today made an expansive case in a 31-page filing that DOMA is unconstitutional. Previously, the government had attached the Feb. 23 letter from Holder to House Speaker John Boehner (R) that announced the DOJ position to filings to courts about the decision to stop defending the law, but it had not laid out any more expansive reasoning. But, for Golinski’s case, DOJ did so. In describing why heightened scrutiny applies to classifications based on sexual orientation, for example, the DOJ’s lawyers — in describing how “gays and lesbians have been subject to a history of discrimination” — write, “The federal government has played a significant and regrettable role in the history of discrimination against gay and lesbian individuals.”

This comes shortly after the DOJ made a confusing move on a bankruptcy court case in California that seemed to go against its affirmation not to defend DOMA in court. To be perfectly honest, I’m not an expert in the matters of the law and I’m not going to pretend like I am. I do believe we have enlisted an expert of some kind to help explain some of this to you relatively soon, as we are wont to do, but THIS IS A BIG F*CKING DEAL, Y’ALL.

Some may call it an evolution — the DOJ went from saying they’d defend DOMA in court to saying that they wouldn’t, because it was unconstitutional, but not really going into the details, to now fully speaking out against DOMA with 31 pages on why they’re doing so. They are specifically citing “animus” towards gays and lesbians as THE ONLY REASON DOMA EXISTS — that’s a big deal.

Interesting that they did it on a Friday night, therefore keeping it relatively out of the news cycle — nobody started reporting on it until Saturday morning. I assume on the Seventh Day, there will be rest.