Sue: “Jesus said it best: the end justifies the means.”

That explains so much. 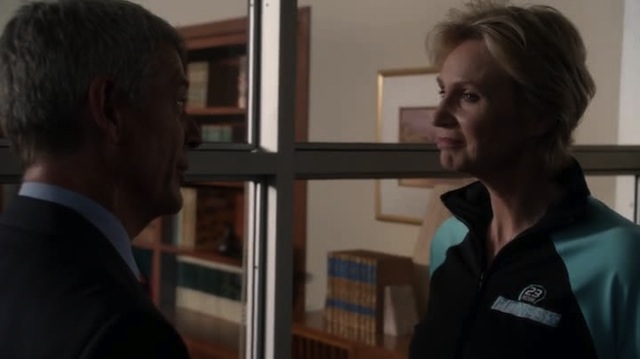 you smell that? that’s the smell of me doing absolutely no wrong

Elsewhere in the hallowed halls of McKinley’s Home For Wayward Homos, Artie and Fake Quinn are singing “You’ve Got To Hide Your Love Away” to each other, but mostly to themselves because they can only communicate directly in private. Did you know that some people think John Lennon wrote this Bob-Dylan-influenced song for Brian Epstein, The Beatles’ closeted homosexual manager? Now you do. 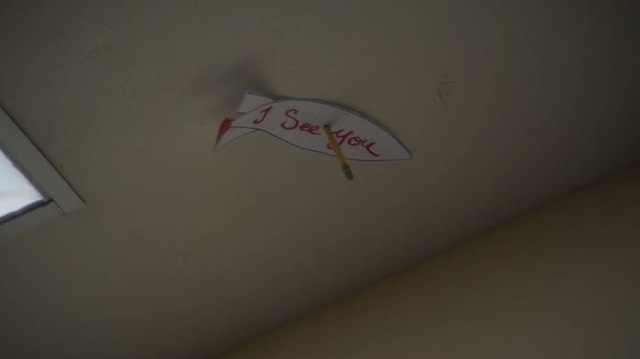 this is not even remotely creepy/phallic

Apparently Fake Quinn’s been using her undoubtedly acrobatic high-jump skills to write Artie secret messages on the ceiling about meeting her in the boiler room JUST KIDDING WRONG SHOW the science room. a.k.a., “under the stars.” 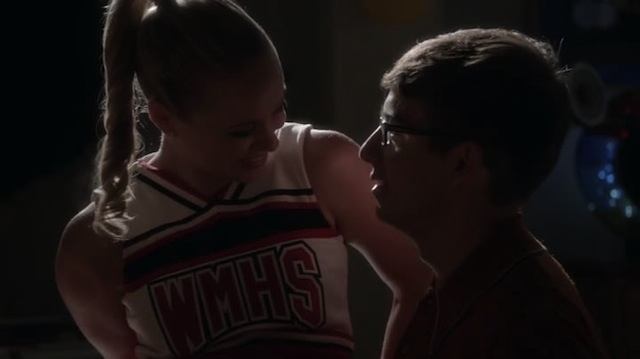 We escape our starry starry nightscape and beeline into the Glee Room, where Blaine’s got a “very special” and arguably “very personal” announcement to make:

Blaine: “As most of you know already, Kurt and I are officially back together.”

Everybody yells wildly as if Schuster just announced it was Diva Week and everybody’s pet gerbil would get free taffy or something. Seriously we’re talking unbridled ecstasy here. 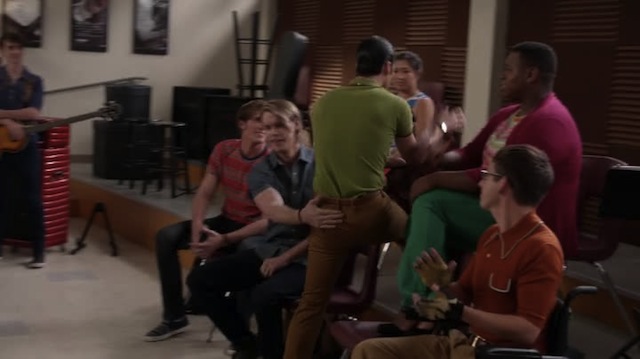 Blaine follows up this announcement with yet another; he’s recently suffered a nasty head wound on the King Cobra and therefore thinks it’s a swell idea to ask Kurt to marry him. He didn’t say the part about the head wound, I’m just guessing because why else would a 17-year-old boy think getting hitched to his high school sweetheart is a bright idea. 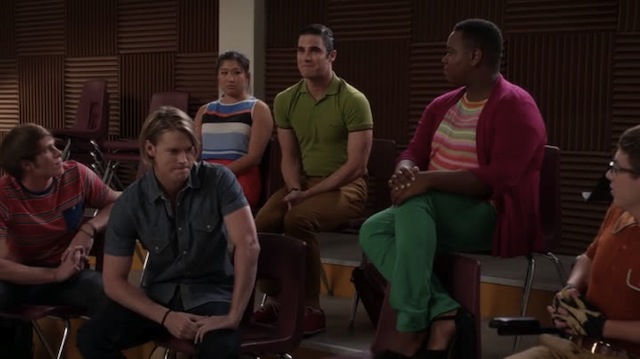 Sam, who’s hair this season thus far looks like he either just got out of the shower or hasn’t showered in a week, is the only Gleek enthusiastic about Blaine’s announcement, and his reaction is honestly perfect and hilarious, reflecting as it does the sort of clunky but well-intentioned enthusiasm the straights often exude for our brand-new rights: 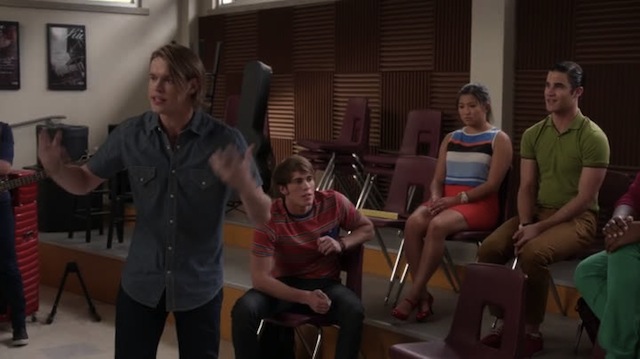 raise the gay roof, you guys! let’s give the gays something to talk about! all i wanna do is have a little gay before i die!

Blaine’s big plan is to get as many extras as possible involved in this Spectacular Spectacular Gay Marriage Proposal by inviting Vocal Adrenaline, The Warblers, and The Haverbrook School for the Deaf to participate. Unique says “no ma’am” to Vocal Adrenaline and Tina goes on a little unhinged “are you crazy?” rant and Sam’s like, calm down and let my Down-Low Lover speak:

Blaine: “I want this to be more than just an ordinary proposal. I want this to be a statement… hey, our generation is at a turning point. People everywhere — except like, Russia — are beginning to see that it doesn’t matter who you are or where you’re from or even what G-d you believe in, they’re beginning to see that people really aren’t all that different. And honestly, if we can get a bunch of cutthroat show choirs to stand side-by-side and unite in something, then anything is possible.”

If Blaine can get all the Glee Clubs to sing together, then anything is possible! World peace! Apple Damn Sandwiches! Rich men investing $6.5 million dollars in Autostraddle! Universal health care! Glee using the correct terms to refer to transgender people! Me owning a car! Me renting a car and not driving it into a pole! Clean underwear forever without doing laundry! Santana and Demi Lovato starting a Selena cover band and scissoring for 23 minutes on our teevee screens! Faberry! For Target to re-stock my size of workout pants because mine have holes in them! 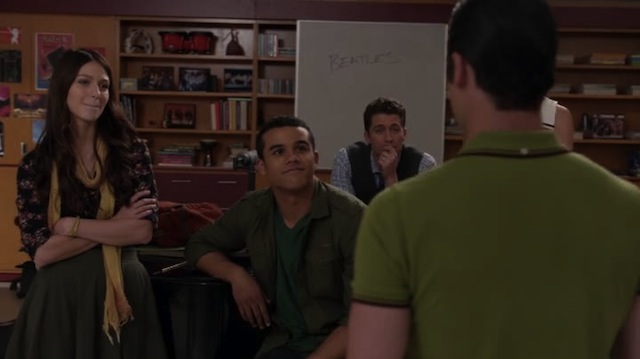 “are you gonna tell him that his fly’s unzipped?” “uh-uh you do it.”

No but really I think by “make a statement” he means that he’d like this proposal to go viral, like that lesbian who got her cute friends to dress up like Warblers to perform for her proposal to her girlfriend and you watched it five thousand times. The Warblers = YouTube Goldmine. BRB I have to watch the Mini-Warbler again.

Anyhow, thus we leap snazzily into Help!, a raucous athletic journey throughout all of Southwestern Ohio’s Finest Showchoir Hot-Spots punctuated by lords-a-leapin’, girls in spandex and boys in blazers! 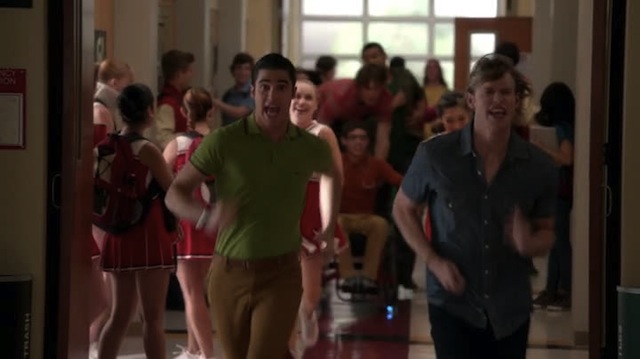 last one to the april rhodes pavillion is a rotten egg!

Did you know that John Lennon wrote HELP! for the movie HELP! and that the topic of the song is basically about him feeling insecure? Well now you do. 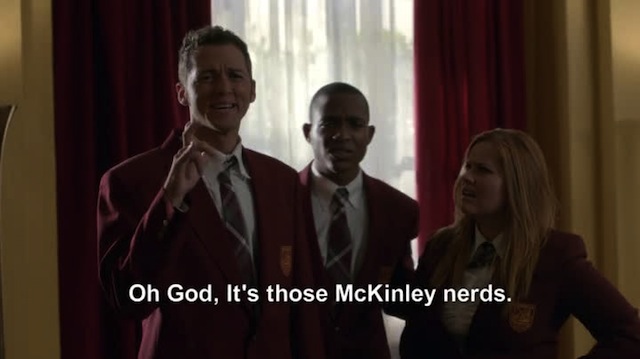 i hear there hasn’t even been any lesbian action this season. what losers. 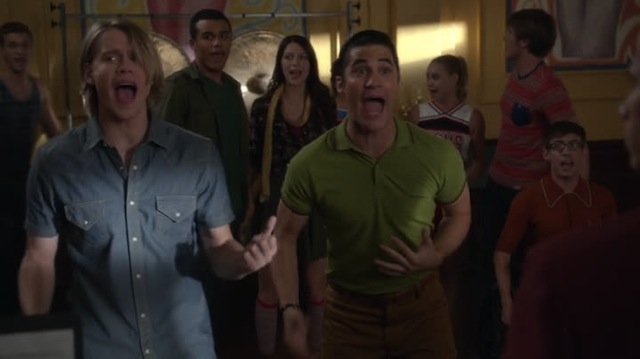 throw a junior mint in my mouth! not his mouth my mouth! 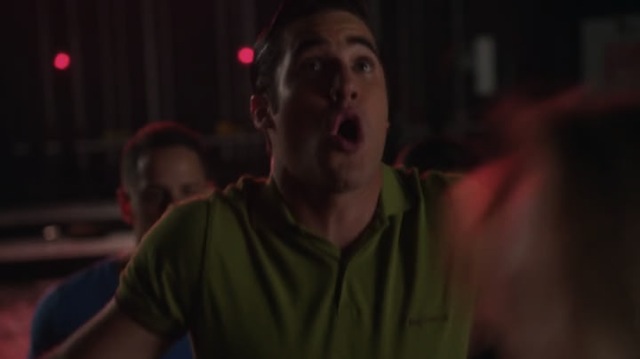 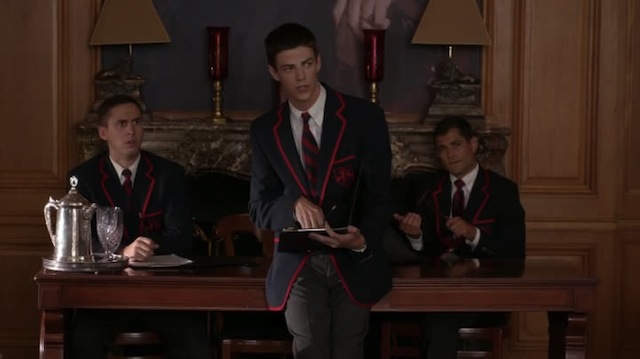 i’m sorry but i don’t see “blaine and his not-bisexual not-boyfriend serenading us like retro hyenas” on today’s agenda? 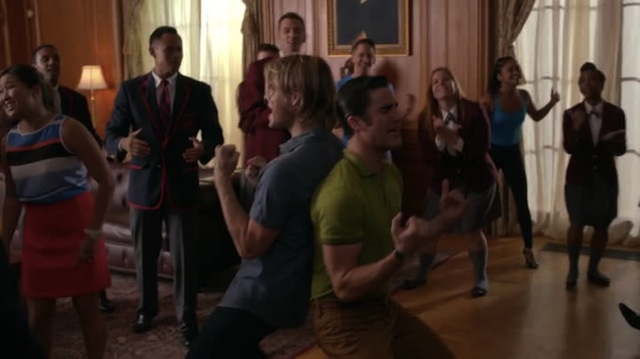 trust me bro this is super good for your quads

Everybody agrees to participate in this shenanigan, because they also want to go viral.

Zoom on back to the Hallowed Hallways of McKinley High School For The Forever Young, where Tina’s flipping out about Artie’s consent to a secret affair with Fake Quinn. She’s like, “where’s your self respect?” and Arite’s like, IDK GTG, butt “the hells out”! And that’s that. 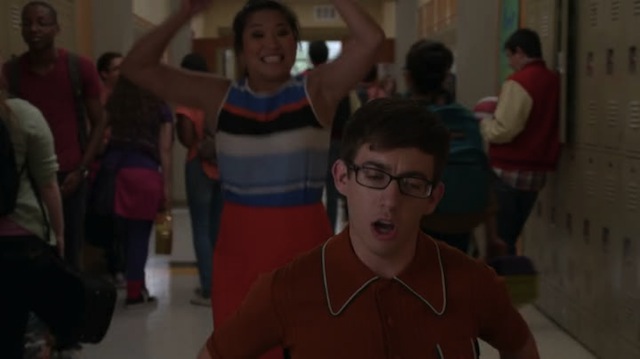 just wait til this math book meets the top of your head, sucker!

We then traverse over the river and through the woods in chic cowboy boots, landing at last at Fake Ellen’s Stardust Diner, where Rachel’s excitement over a text from Blaine is interrupted when she sees the Famous Broadway Director and Paolo Who Won a Tony lunching in Santana’s section. Because that’s where Broadway folks lunch, is tourist traps staffed by semi-talented aspiring actors and actresses who could break into song at any moment. Anyhow, because there are no rules at this restaurant, Rachel insists on delivering their meal. 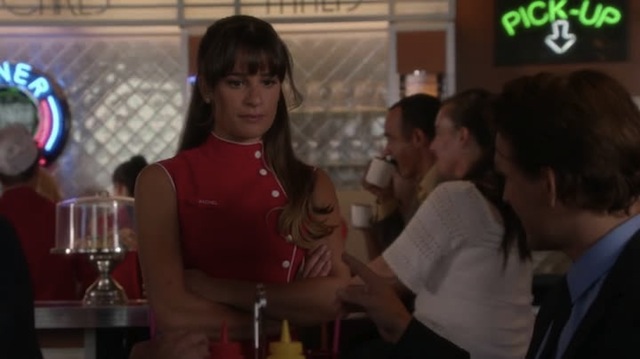 Rachel: “Yes it’s me, and yes it’s awkward, but I don’t care, because I am a professional. Even when people are calling me too young or too green — which for your information, I’m not, I am —” 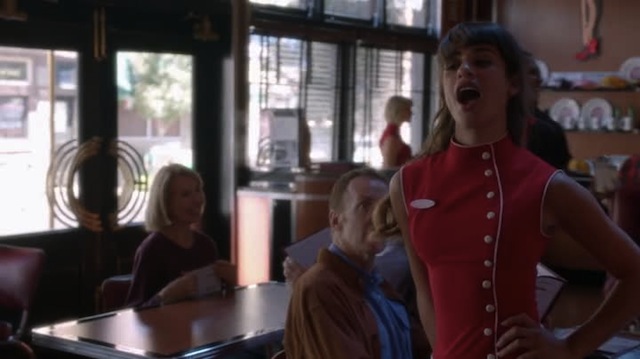 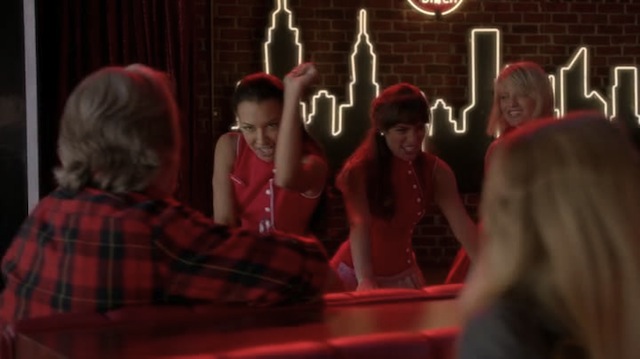 and once you’re all up in there with your fist, you do a little twist like this 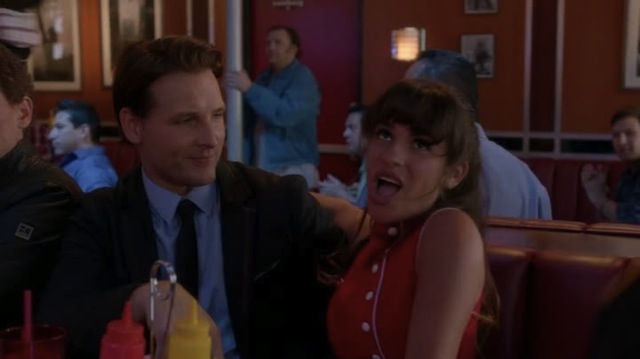 yeah this chick’s pretty, i’ll stick a junior mint in her throat as soon as she stops moving around so much 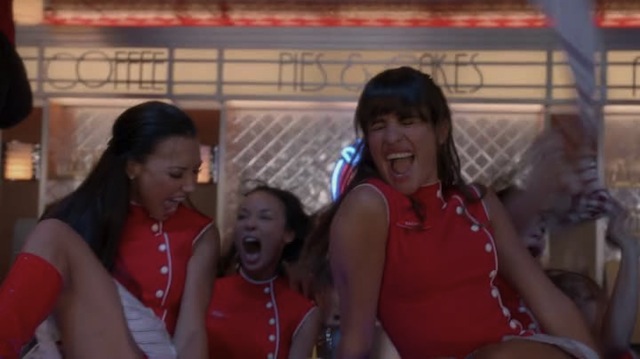 who’s ready for a mint chocolatey explosion in their mouth?!!! 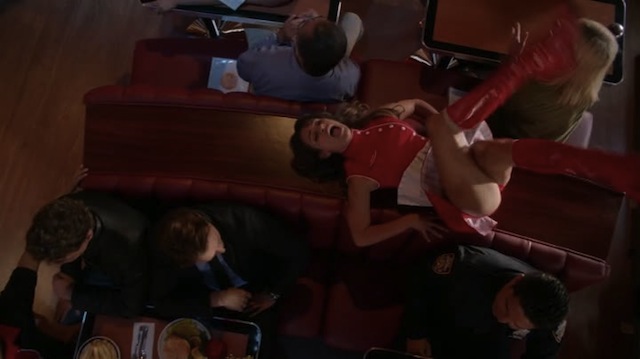 how can anybody say no to those glutes

I love how now that Rachel’s in college, they’re letting her unleash her Sexier Side, which matches up neatly with Santana who’s been rocking her Sexier Side since the Pilot and who now lacks a Quinn or Brit-Brit to employ it with. 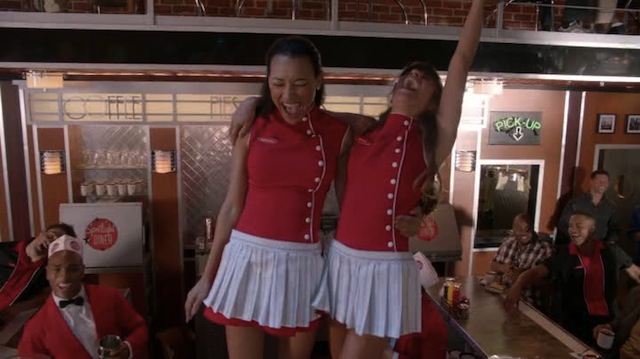 we finally had sex with each other and it was AWESOME!!!!!!

After this fantastic musical number, Rachel tells Santana they’ve gotta go home ’cause she’s got something special to show her. What about her tables? She has open checks! Shouldn’t she do a cash drop? Who’s gonna take her tables. Nobody even knows what the status is of her tables. She’s being a Dear Catastrophe Waitress and this is giving me anxiety, I feel like I’m in the weeds.