The holiday season always makes me think of fan fiction because the first multi-chaptered fan fiction I ever wrote was about my two favorite queer TV characters, Helen and Nikki from the UK primetime soap Bad Girls, getting married at Christmastime. It’s impossible to draw a straight line through our pasts to determine how we got to where we are at this very moment in time on this whirling planet — life is a spiderweb of little decisions leading in a billion different directions — but I can say without a second of hesitation that writing that fan fiction was the catalyst that led me to pursuing nearly every good thing I have in my life today.

The story was called “What God Has Brought Together (And All That)” and writing it allowed me to explore so many things I was feeling in my head and heart, in a safe way, with characters I already loved. Hyper-religious upbringing? Check. Terror of coming out to family? Check. Desire to settle down and create a home with a woman? Check. Just plain old sexual desire? Check, check. I worked out more of my own stuff in that story than I did in the years of therapy leading up to me writing it. I made a dear friend in the forum where I posted the story, a dear friend who would ultimately go on to save my life. And I gained confidence and skill as a writer by posting the story and engaging with the feedback people left me.

Not long after I finished it, I quit my office job, packed a backpack, flew to Europe, saw the world, and came home to pursue my dream of being a real writer.

What I didn’t know back then was that I already was a real writer. No, my story wasn’t great. No, I wasn’t getting paid for it. Probably only about twenty people read it, and I got in trouble by the forum admins all the time for misspelling things and getting all my British stuff super wrong. I was a writer because I was writing, simple as that.

This month, I asked five TV writers who work on shows with queer female characters to answer one question for me: Does lesbian fandom have any effect on what we ultimately see on our TV screens? Three of them said yes; two of them said no. As I thought through their answers, again and again, I finally decided the no’s don’t really matter to me. Eight years into doing this job, I somehow arrived at this idea that “visible endgame” is the ultimate fandom goal. (Maybe that’s because people yell at me the most about that on Twitter.) But as I think back over my own experiences, I realize that creatively engaging with queer stories in queer communities, however we see fit, is the ultimate fandom goal.

So many of the best things in my life — this career and the precious woman asleep beside me in bed right now and most of my best friends and my ability to think critically about the media and messages I consume — are rooted in fandom. Most of them can be traced back to the very first fan fiction I published. Albus Dumbledore was always right: “Words are, in my not so humble opinion, our most inexhaustible source of magic.” Always: “Of course it’s happening inside your head, Harry, but why on earth should that mean that it is not real?”

People often ask to read my first fan fiction and I just blush and say no, but it’s Christmas, and so here it is. I’ve come a long way as a writer, but I’ll always be proud of these fledgling words. I grimace when I reread them, but I always reread them at Christmas.

This month, I’ve got some Clexa fics for you because the new trailer for The 100 got me hyped; plus, a fan fiction news round-up; and answers to some TV questions you asked me. 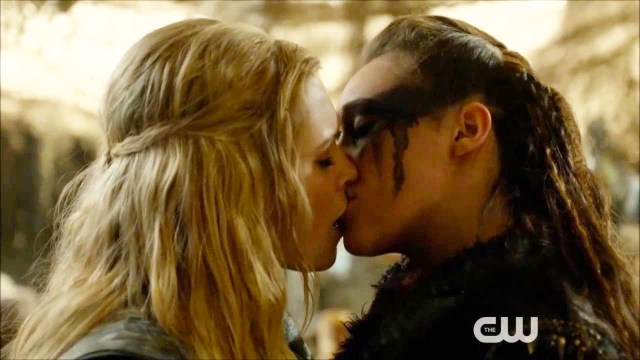 they take their shots but we’re bulletproof by nightshifted

Pairing: Clarke/Lexa, The 100
Plot: Clarke and Lexa smooch a lot and talk about their feelings a little.
Length: 48,000 words

Forged in War by RavenclawGenius

Pairing: Clarke/Lexa, The 100
Plot: Lexa loves Clarke and she’s going to wait and wait and wait until Clarke realizes she loves her back.
Length: 43,000 words

I really want to feature female stories in all of my work. The opportunity to have a story about two female characters and their friendship was really important, particularly because in geek and nerd culture there’s a lot of hostility towards women historically. So it was an important and deliberate choice to make it two female characters. The goal with the short was to make it a love letter to female fans of nerdy stuff. Ideally that will make them feel included into a world where they are often excluded from.

+ Anna Todd is creating her own empire! This girl wrote a One Direction-inspired fan fiction that sold for six figures and she got to keep her work on Wattpad.

Todd rose to fame through the online publishing site Wattpad, which allowed her to self-publish her story — a romantic tale between a Harry Styles-inspired bad boy and a sweet college girl — one chapter at a time online, and interact with Wattpad’s 40 million users who left comments to help her shape the next chapters. After her body of work hit more than 800 million reads in summer 2014, Simon & Schuster’s Gallery Books won a bidding war for the publishing rights in a mid-six-figure deal.

+ Over at The Mary Sue, a series of interviews with fandom writers and artists: “Fanfiction and Fanart: The World Beyond Fifty Shades of Grey.”

Even with a modicum of acceptance, though, most fan creators find it hard to shake the eyerolls or even downright offensive commentary. With this new wave of legitimacy, I wanted to talk to leaders in the fanfic and fanart worlds to get a better sense of what inspired them to create, how they feel about the higher profile, and how they see their work being devalued—not just in the media but from within the assumed safe space of fandom.

Heather, what the hell! Carol was even better than you said it was going to be! How are we ever going to go back to mediocre representation after this?

I think about this like five times a day! And I’ll tell you, friend. I’m not going back. Carol, Freeheld, Grandma, Tangerine: All in theaters in a single year. Three of those films racking up awards. Like. Annalise Keating is queer now, okay. Viola Davis is playing a bisexual character on a female-fronted show on ABC’s most watched night of television. Person of Interest is gladly going there with Root and Shaw, on CBS. Two now-queer characters exploring a relationship, even though they weren’t intended to be queer form the outset. They’re going there because their chemistry is so good and because lesbian and bisexual women are NORMAL. I’m not going back to the way the world was before this year. I just refuse to do it.

Do you know who dies in PLL 6B? I’ve heard some rumors and you seem really dejected about the coming season, which makes me think the rumors are true.

I do know who dies, yes. I think you know too. You seem to know. And yes, I am dejected. Let’s talk it out once the 6B premiere airs and figure out what to do together, yeah?

What were your favorite TV shows that didn’t have queer women in them in 2015, HH?

Help! I have three weeks off from school and I don’t know what to marathon on Netflix. I’m so far behind on every show with lesbian characters.

I’ve got some good news for you: Riese made you a list!

I have finally had it with Once Upon a Time, Hogan. I can’t do it anymore. Help me. Help me get out of here.

I’m sorry OUAT broke your heart. I understand. I have had my heart broken by TV much more than I have had my heart broken by actual human beings. But look, it’s 2015! There are more canonically queer female characters/relationships on TV than ever before. What you need to do is get yourself back out there into the world and watch some other things, see what you connect with, see what captures your heart and imagination; then, you can dig into those fandoms and find a new home. I’m going to suggest Person of Interest to you. I believe that is a very good start toward healing your heart.

Can you suggest a show similar to Defiance that I might like? I’m really sad it was cancelled but I’ve never been into sci-fi and I don’t really know where to start. I like Buffy.

Oh! Firefly, then. Firefly is the next logical step for you. Hit me up when you’re finished and I’ll point you toward something else!