Carlos Maza had spent “the better part of the past two years” blogging about the National Organization for Marriage (NOM) when he applied to attend their 4th annual youth conference,” It Takes A Family To Raise A Village” in San Diego, CA. His blog posts held NOM in a less than favorable light, but that didn’t stop the organization for welcoming him to their conference with a hearty “Congratulations” email. (They often have trouble getting people to show up at their events.) In any case, despite some trepidation, Maza decided to attend the conference under the guise of a straight, homo-hating young man, and reported on what happened over the course of four days for the Internet at large. 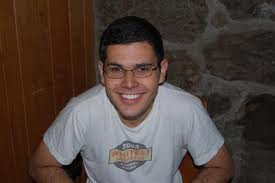 Many other publications have reported on to the rhetoric Maza heard over the course of his four days at the conference, and it is indeed troubling and hateful — Maza describes NOM as “selling a book that labels gay people as pedophiles worthy of death, distributing Bible quotes to college students similarly calling for gays to be killed, hosting entire speeches devoted to condemning gays and lesbians as deviant sinners.” Honestly though, it’s nothing I wouldn’t expect. This is an organization that uses race-baiting tactics in an attempt to further their campaign, and when called out on such tactics tries to justify it by explaining that no one else was supposed to see them. They use Photoshop to lie about how many people attend their rallies, won’t disclose their donor information and use sketchy scientific studies to create false narratives. I expect these people to suck.

That said, just so we’re all clear exactly what they were preaching to impressionable young minds during their conference, let’s review exactly what was said. Maza does a great job highlighting the details of each day, and provides video clips from some of the more hate-filled speeches. It’s really worth it to head over to Media Matters and read his full report, but here are some of the key points:

According to Brigham Young University professor Jenet Erickson, same-sex relationships are “inherently unstable,” as well as “dysfunctional and erratic.” NOM spokesperson Thomas Peters endorsed ex-gay therapy and ridiculed the “gay hook-up” and “pet grooming” ads that appear on LGBT websites. Robert Gagnon, one of the founders of the Restored Hope Network, said a homosexual relationship is worse than a polygamous one and also stated that homosexuality is “self-degrading,” inflicts “measurable harm” on its participants, and that gay people are not “born that way.” Economist Douglas Allen used Mark Regnerus’s study to claim that children who grow up in same-sex parent households are multiple times more likely to face sexual abuse. Along with this group of esteemed speakers, Maza also had a fun roommate who wore a t-shirt that said “BARACK OBAMA, THE ABORTION PRESIDENT.”

The facts in this article are appalling, and it’s important that someone reported them, particularly because NOM likes to pretend it is “anti gay marriage,” not “anti gay.” Maza writes that the conference “end[ed] up being one of the most disturbing and overtly homophobic experiences of my life.” He talks about how until this moment, NOM and their backwards ideas always seemed distant and not particularly threatening:

From the comfort of my desk in DC, it’s always been easy to think of NOM’s anti-gay efforts as somehow being outside of my own life. I don’t wake up each morning worrying about NOM denying me the ability to build my own family or raise my own kids. I’m legally allowed to marry and adopt children with a same-sex partner if and when I choose to do so. NOM’s talking points were offensive and extreme, but I’d grown accustomed to treating them the same way I treated every argument as a debater in college – assess its merits, find its flaws, and debunk misinformation.

But watching the talking points being made in front of and about you is a different thing. Maza writes about hearing the joke “Two gay guys walk into a mosque… they were never heard from again!” and watching the attendees around him nod to themselves and whisper “Fascinating!” during Douglas Allen’s talk. He asked himself “I’d heard this kind of anti-gay rhetoric hundreds of times before… So why was I getting so upset?” Trying to reconcile his feelings of being personally targeted with his knowledge that they’re a deeply flawed organization whose power is dwindling, Maza concludes “In the public eye, NOM depicts itself as fair-minded and moderate pro-marriage group. In reality, it’s the kind of organization that seeks to train college students to justify anti-gay bigotry by relying on stereotypes, pseudoscience, and a sizable dose of right-wing religious extremism.” 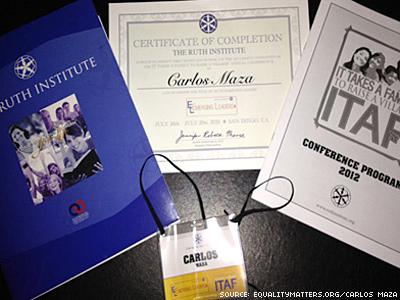 As some other reporters have already noted, it will be really interesting to see if and how NOM responds to Maza’s report. It will also be interesting to see if, as marriage equality laws continue to barrel forward, NOM becomes pointless, or more obviously pointless than it is now. Because really, when news outlets (and Maza, for that matter) report on the hateful and inaccurate rhetoric being spouted at NOM’s events what they’re saying is that NOM is doing exactly what it’s always done. But things are changing much faster than NOM can keep up with and the landscape for gay marriage and gay rights in general looks very different than it did even a year ago. And young people — even those who are conservative, the very demographic NOM was trying to reach with this conference — largely favor marriage equality. Virtually every sign and trend points towards rapidly increasing acceptance of gay families and mainstream support for our rights, even among Republicans (sort of). Even NOM’s strategist Louis J. Marinelli saw the error in his hate-filled ways. Does NOM have any kind of plan about how to adapt its strategy to acknowledge the fact of the cultural shift around queer people and their families? This conference would imply that they don’t — which is a good thing.

Will it continue to host four day conferences for youth if no one shows up? Will it continue to fight against gay marriage if there are no lawsuits to campaign against? What happens when the country finally grants marriage rights to all humans, regardless of sexuality? Maggie Gallagher, the “firebrand” who launched NOM, has since stepped down — her perspective hasn’t changed, but she is no longer leading the fight. Is this what will happen to all the leaders in the anti-gay movement? Only time will tell. I’m curious to see what their next move is — Maza played an extremely brave and clever hand with his exposé and it seems as though it’s just one more strike against an organization (and a set of views) that’s heading for extinction. NOM’s response — or lack thereof — to Maza’s report may say more than anything they voiced out loud at their conference.