Much to no one’s surprise, it has taken only 24-48 hours for anti-gay organizations to (incorrectly) interpret the findings of Mark Regnerus’s new study on gay and lesbian parenting to mean that lesbian parents are definitively worse ones. The National Organization for Marriage has gone so far as to create a wildly misleading infographic based on their perception of the results! 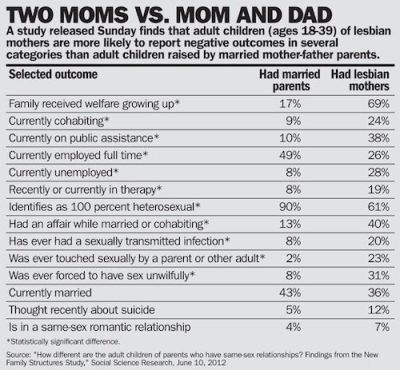 Of course, what the sentence introducing that graphic leaves out is that it’s not really “lesbian parents” whose children are under discussion, but “parents whose children are aware that they had same-sex contact at some point while raising them.” Which is a horse of a distinctively different color. They also claim that “most of the children studied spent only a few years with their same-sex parents, which makes it likely that their family arrangement changed more than once and, thus, that their childhood was unstable.” Essentially, every statement NOM makes is directly contradicted if one actually reads the study in question; as Amy Davidson’s piece in the NYTpoints out, “most of the adults that the study considered products of gay or lesbian parents were not, for the most part, raised by gays or lesbians.” Most of these children were raised in heterosexual households in which a parent had some same-sex contact, which is very different from what NOM is claiming here. While this is fairly evident to anyone with access to Regnerus’s work, most people whom this “information” is meant to reach won’t see the study, and many of those people aren’t necessarily aware that NOM isn’t a reliable source of information about parenting and families, gay or straight. It’s a more reliable source of information about “not the effect of gay parenting, but of non-, or absentee parenting,” as Davidson says.

While Regnerus does explain the way in which his data collection worked within his study, and makes several statements about how his study shouldn’t be used to inform sweeping statements about policy or legality when it comes to same-sex families, his conclusions also lend themselves to some easy soundbites that play into a lot of already-existing fears about gay parents, which is frustrating. Regnerus seems like he may be surprised at the firestorm his study is inciting.

Talking to BuzzFeed, he said that he’s “not terribly politically oriented,” and said that his work gets attention because it’s based on “interesting research questions that tend to have wide public interest.” When asked about his reaction to the proclamations made by NOM and the Christian Family Research Council about his research, Regnerus said only “I don’t press political answers on anybody.” It seems that Regnerus is, willfully or no, perhaps not entirely cognizant of the social ramifications of his research — or at least, what his research can be misframed to mean. Regnerus also said “I’m not the sort of person that obsesses about peer perceptions of me. How adolescent that would be,” wholly ignoring the question of what perception of America’s gay and lesbian families will be.

He’s also come under fire from critics for the fact that much of Regnerus’s study’s massive amounts of funding came from the Witherspoon Institute, which is reputed to have ties with organizations like NOM and the Family Research Council. As Box Turtle Bulletin pointed out on Sunday, this isn’t quite as damning as it might appear; as they said, “the source of funding can indicate a potential conflict of interest, but the true value of a study rests on the methodology… If the methodology is sound, then the study’s conclusions are sound regardless of where the money comes from or who’s doing it.” But the fact that some of Regnerus’s previous work has been on “hookup culture” and age of marriage (and has been cited by Focus on the Family as evidence calling for early marriage) (and some believe Regnerus has a personal religious agenda) (and also clearly has strong personal feelings about the institution of marriage) raises some eyebrows. Of course, none of these reservations will ever reach most of the people who will see the sensational headlines that will result from this study. Which would, again, be fairly easy to disabuse a reader of if they read the study. But the easiest parts of the study to quote and digest are the ones that seem like they’re disparaging the parenting abilities of gays and lesbians, while the parts which explain what the data actually means are buried deep within the text.

These reactions from NOM and other organization are not, again, surprising. And the way in which the gay community will have to respond to these misinformed attacks isn’t new, either — we’ll have to know more about this study and the facts it’s based on than anyone else, and be scholars of our own experience so that we can call out those who try to speak ill of us and our families. Which isn’t a fun position to be in. But the reason that NOM and other organizations are reaching to twist the facts like this is because they have no real facts on their side, and they know it. And it won’t be long until everyone else does, too.