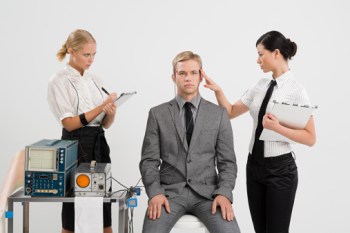 his hair seems 46% less gay than it did before therapy

At a DOMA Senate Judiciary Committee hearing earlier this week, Senator Al Franken called out Focus on the Family’s Tom Minnery for misrepresenting research in his testimony.

Minnery had tried to use a 2010 study by the Department of Health and Human Services to support his own argument that children who are in families with opposite-sex parents do better than those who aren’t. Instead, Franken read the study and pointed out that the study found that children with married adoptive or biological parents, regardless of gender, did better.

Franken: It says that nuclear families, not opposite sex married families, are associated with those positive outcomes. Isn’t it true, Mr. Minnery, that a married same sex couple that has had or adopted kids, would fall under the definition of nuclear family that you cite.

Minnery: I would think that the study, when it cites nuclear family, would mean a family headed by a husband and wife.

Franken: It doesn’t. The study defines a nuclear family as one or more children living with two parents who are married to one another, and are each biological or adoptive parents to all the children in the family. And I frankly don’t really know how we can trust the rest of your testimony if you are reading studies these ways.

It would be nice to think that Minnery’s mistake comes not from willful misrepresentation but from habit — when you’re used to seeing the world in a certain way, you come to expect it to always be that way, which could be why he automatically interpreted ‘nuclear family’ as ‘family with opposite sex parents.’

The anti-gay contingency, lacking any actual evidence to support their position (because their position is wrong), find a lot of ways to deliver lies to the public. This might come in the form of misleading PSAs about how gay marriage will indoctrinate children, or Yes on Prop 8’s key witness drawing all of his evidence about gay marriage’s negative effects on society from “documents on the internet.” Just today in The Daily Beast, lawyer Michael Medved concocts a giant steaming pile of nonsense about what exactly kids will be “forced to” learn about under California’s new bill requiring LGBT history being taught in schools.

When unable to use agenda-driven “research” or unable to completely make shit up (like, say, in a formal Senate Committee hearing), there’s yet another way to sneak untruths into the conversation: drawing false claims from respected research or generally mis-representing where your evidence is coming from. In this particular type of discourse, this exact issue seems to happen constantly. And it’s usually not as funny as Al Franken made it.

Here’s some examples of this action in action (some of which came from Pam’s House Blend’s great roundup on this topic):

+ Earlier this year, the Family Research Council’s Peter Sprigg published an article in the Christian Post in which he claimed that research “demonstrates that family structure matters for children, and the family structure that helps the most is a family headed by two biological parents in a low-conflict marriage.” Of the studies he cited, one didn’t explicitly address same-sex households in any form, and one was very vague about whether or not it included same-sex families.

+ Dr. Robert Spitzer, who was influential in removing homosexuality from the American Psychiatric Association’s list of mental disorders, has claimed that his work on whether or not people can switch sexual orientations has been hijacked by the pro-ex-gay people.

+ George Rekers, a proponent of gay conversion therapy, based numerous books and studies on the example case of Kirk, a boy who entered therapy at the age of 5 and was monitored throughout childhood and adolescence. Rekers claims the therapy worked and turned Kirk into a well-adjusted hetero-acting grown-up — a claim which is false on many levels. For starters, Kirk never became straight, obviously — and all that self-loathing about his orientation and behavior instilled in him at such a young age drove Kirk to suicide in 2003.

+ The American Family Association used work by Michael King, a University College of London professor with prolific work in depression and suicide in LGBT people, to claim that anyone who “engaged in a homosexual lifestyle” had a risk of suicide 200% higher than that of people who hadn’t. This number was indeed from King’s research, but the research in question wasn’t about engaging in a homosexy lifestyle — it was about one of the possible effects of experiencing stigma and discrimination.

+ Three weeks ago, NOM’s Maggie Gallagher (who appeared in the American Family Association’s One News Now this morning to discuss how “voters all over the state” are upset about New York’s gay marriage bill) brought up the “negative religious impacts of marriage equality” at a press conference, claiming this impact had been certified by subjective “leading legal scholars” from Harvard and Stanford. Far from it, actually — the “scholars” she cites are, in fact, scholars who participate in anti-gay activism and have ties to anti-gay hate groups.

These instances all have a few things in common, but homophobic organizations picking and choosing and improperly editing down research to extract the parts of it that they believe can benefit them while ignoring the parts they don’t like is the biggest. The best lies are the ones that are sort of true, and it’s very easy to pick a study and declare that researchers said something, because how many people are going to call you out on it? Not nearly enough. This is why it’s important to read, and why it’s important to understand what you’re reading, and why — particularly in the case of the organizations in question — it’s incredibly important to fact-check sweeping statements and studies and research and maybe question why an anti-gay group is citing a prominent generally pro-gay (or at least neutral) researcher. Franken did his homework, but not nearly enough people are doing theirs.