The first-ever hearing on the DOMA-repealing “Respect for Marriage Act” happened today in the Senate Committee on the Judiciary and we laughed, we cried and it was WAY better than CATS. The Associated Press enjoyed it so much that they made a highlights reel for you:

So! Senator Dianne Feinstein initially introduced the Respect for Marriage Act on March 16th after the Department of Justice announced it’s opposition to defending DOMA because DOMA is unconstitutional and also very unpleasant for a large group of very nice people. As we reported yesterday, Obama agrees with this assessment.

We’ll get into a full recap of today’s hearings momentarily, but we’re gonna start out with the two smackdowns of Team Totally Right Making Team Totally Wrong Look Totally Wrong that you’ve seen buzzing around the internets this morning. These conversations took place during the question-and-answer period following the testimony of several witnesses including Focus on the Family’s Thomas Minnery.

First up was Senator Al Franken, who challenged Focus on the Family’s Thomas Minnery‘s written testimony.

In that testimony, Minnery cited a Department of Health & Human Services study to prove the following point:

Franken read the study himself and disagrees with Minnery’s assessment. Franken pointed out that the study actually says: “Nuclear families, not opposite-sex married families, are associated with those positive outcomes.” 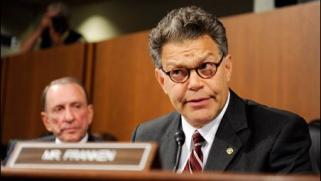 Franken then asked Minnery, “Isn’t it true that a married same-sex couple that has had or adopted kids would fall under the definition of a nuclear family in the study which you cite?”

Minnery responded that he assumed “nuclear family” meant one man and one woman, but Franken pointed out that “it doesn’t.” Har.

Rather, the study defines nuclear families as “one or more children living with two parents who are married to one another and are each biological or adoptive parents to all the children in the family.”

Franken concluded: “I don’t really know how we can trust the rest of your testimony if you are reading studies in these ways.”

That is to say, “incorrectly.”

The next smackdown came from  Sen. Patrick Leahy (D-VT)‘s questioning of — you guessed it — Thomas Minnery!

Leahy wanted Minnery to address Minnery’s contradictory positions regarding how, precisely, one ought to both Focus on the Family AND put LGBT families at a distinct economic disadvantage. Leahy asked if children were better off in a LGBT family or with no family at all:

Minnery: They’re certainly better off than if they had no home headed by parents but same- sex marriage says a whole lot more than that senator —

Leahy: Are they not disadvantaged by not having the same financial benefits that an opposite sex family would have?

Minnery: Well, as I say, not knowing the details of which families you are speaking off, certainly children are better off with parents in the home.

Leahy: Yes or no, it’s not a trick question – if you have parents legally married under the laws of the state – one set of parents are entitled to certain financial benefits for their children, the other set of parents are denied those same financial benefits for their children…are not those children of the second family, are they not at a disadvantage, yes or no?

Minnery: That would be yes, as you asked the question earlier Senator.

The hearing kicked of at 9:45 AM EST with Chairman Patrick Leahy’s opening remarks about how awesome Vermont and New York are for legalizing gay marriage and how he can’t imagine what he’d do if his marriage wasn’t acknowledged by this fine nation. 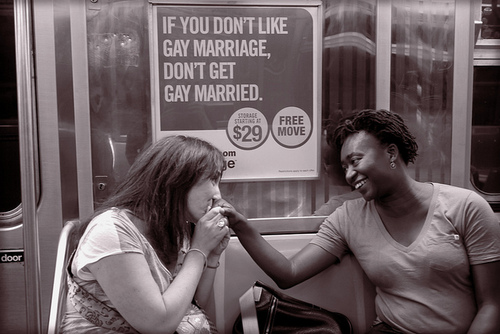 After Lead Sponsor Dianne Feinstein’s opening statement, Senator Chuck Grassley of Iowa had some opening remarks in defense of DOMA, which included actual bullsh*t in addition to objective bullsh*t, as reported by Metro Weekly:

[Grassley] later referenced Obama’s support for “traditional marriage” in the 2008 presidential campaign and, incorrectly, said, “Until yesterday, he was a supporter of DOMA.” Although the administration support for a specific bill was new on July 19, Obama had — including during the 2008 campaign — supported the repeal of DOMA.

The hearing featured three panels, starting with Congressman and respected Civil Rights leader John Lewis (GA) and Rep. Jerrod Nadler of New York, who spoke in support of a DOMA repeal, and Senator Steve King of Iowa who spoke in defense of it.

John Lewis said all this hate/homophobia he’s fighting against reminds him of all that hate/racism he fought against in the 60’s. He accurately described DOMA as “a stain on our democracy.”

“DOMA’s supporters still claim that the law should survive, and argue primarily that DOMA serves a legitimate interest in protecting the welfare of children by promoting an ‘optimal’ family structure — one that consists of a married opposite-sex couple raising their biological children. But there is no credible support for the notion that children are better off with opposite-sex parents or that married gay and lesbian parents do not provide an equally loving, supportive, and wholesome environment.”

Panel II featured people impacted by DOMA and kicked off with Ron Wallen, a 77-year old from Indio, California whose husband and partner of 58 years died of leukemia a few months ago. The couple had married during that brief lovely time known as “when gay marriage was legal in California” but DOMA still affected the couple’s affairs.

Wallen testified that, “Tom’s illness was four years of pure hell… not a month went by that I wasn’t rushing him to the emergency room.”

Tom died on March 8th, and since then Wallen’s life has been “thrown into financial turmoil because of DOMA.” The couple’s reliable monthly income (from social security benefits, pension and what remained of their investments after the 2008 stock market crash) went from $3,050 to $900, which is $1,100 less than the monthly mortgage Wallen owes on their home. Denied widower’s benefits allowed to straight married couples, Ron has been kicked out of his home.

Next up was Thomas Minnery, Vice President for Public Policy for “Focus on the Family,” who said a bunch of asinine things one would expect from someone who thinks they belong on the panel of human beings directly affected by this legislation.

This was followed by another moving testimony from Andrew Sorbo, a gay man whose husband died three months after they were legally married in Connecticut. They’d been together for nearly 30 years and Sorbo was forced to leave his home of 18 years because of DOMA.

Panel II’s testimonies concluded with Susan M. Murray, a family law attorney with a lesbian partner of 25 years, who spoke about the difficulties DOMA places on LGBT families and couples.

The question & answer period following Panel II was where Franken and Leahy executed their smackdowns, as described at the top of this post.

The hearing ended with New York Senator Chuck Schumer, who expressed excitement about this weekend’s New York Gay Marriage Marathon and also frustration that DOMA still blocks these people from federal recognition. He said something along the lines of: “This is wrong and something must be done about it!”

I liked this quote from LGBT POV, which I think sums up how a lot of us have been feeling lately with so much sudden support for our causes from government officials:

“After so many years of antigay rhetoric from Congressmembers and Senators as if it is natural for the despised LGBT people to be held as second class citizens – this hearing (as with the words about integrity from Admiral Mullen during the Don’t Ask, Don’t Tell hearings) – are enough to make a cynical gay like me to believe that full equality might actually be achievable before I die.”

I never thought all this would feel as surreal as it does.