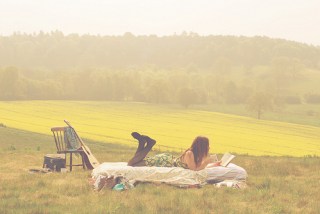 you could read it in a meadow

Nothing will ever be as glorious as Judge Walker’s 138-page ruling on Proposition 8, which was epic in every way possible — but this 31-page Brief in Opposition of Motion to Dismiss Golinski v. The United States of Personnel Management is also extremely validating and the best thing I’ve read all week (well, this was pretty good too).

I recommend you print it out and bring it to the pool with a cocktail and some kleenex. But first, in order to understand how this 31-page feast of excellence came to be and what purpose it serves, you should read What the Heck is Going On With Doma?.

I’m sure you’re going to read it anyhow, but if you still need convincing then listen up: because gay history isn’t usually taught in schools (YET!), it’s likely many of you homogays will learn quite a bit from Section 1i: “Gays and Lesbians Have Been Subject to a History of Discrimination”, a.k.a. “The Most Heinous Examples of How the Federal and Local Government and Private Parties and Have Persecuted Gay People Throughout History.” It goes through custody fights, gay bar raids, the whole shebang, right up ’til the present day.

Did you know that the Postal Service used to provide the government with names of people who subscribed to “physique magazines” and then fired federal employees based on those suspicions? I did not.

But the fun doesn’t end there. You will also enjoy other gripping sections like “Gays and Lesbians Exhibit Immutable Characteristics that Distinguish Them as a Group” and “Gays and Lesbians are Minorities with Limited Political Power” and my future ‘zine name, “Sexual Orientation Bears No Relation to Legitimate Policy Objectives or Ability to Perform or Contribute to Society.” and the grand finale “DOMA FAILS HEIGHTENED SCRUTINY” (their all-caps, not mine).

As you read this I want you to remind yourself “this is from the Obama administration.” I know that many people have issues with Obama, but I personally will be giving his campaign a round of applause.

I don’t know, I almost cried when I read “This record evidences the kind of animus and stereotype-based thinking that the Equal Protection Clause is designed to guard against.” and I almost laughed when I read “There is no evidence in the legislative record that denying federal benefits to same-sex couples legally married under state law operates in any way to encourage responsible child-rearing, whether by opposite-sex or same-sex couples, and it is hard to imagine what such evidence would look like.”

Check it out and let me know what you think!!!!