The top Google search related to director Abdellatif Kechiche’s Blue is the Warmest Color is “Blue is the Warmest Color Sex.” The film’s sex scenes earned it an NC-17 rating in the United States, and video upload sites are now ripe with compilations of the film’s most graphic moments, easier to consume for those whose interest in the film does not include the plot. Maybe it is telling that lesbian movies are usually a Herculean task to procure in their full form, but all too easy to find as prolifically uploaded sex scene super-cuts. It doesn’t take an art history major to tell you about the history of female bodies being objectified and commodified, but if you’re looking for a primer in all the ways that modern media is still failing queers, this film is a good start.

I watched Blue with as blank a slate as I could muster. Of course I had already heard the extensive buzz, partly because I am obsessed with queer narratives in any form, partly because my social media network fits the exact niche that would want to inject all kinds of meaning into a ten minute lesbian sex scene. I had heard the film described over and over again as an experience, one I would come away from with a sense of emotional and psychological exhaustion. I was ready to be moved by something groundbreaking. You can only imagine my disappointment. 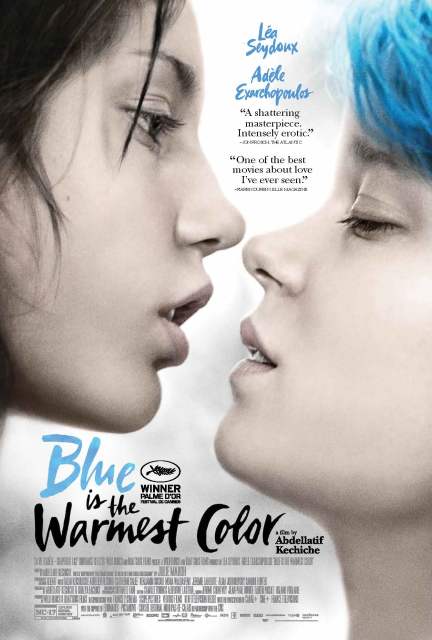 I am sad to report that I was underwhelmed and uncomfortable, and all too familiar with the tropes at play, none of them creatively handled. At a bloated 2 hours and 53 minutes, one wonders if there were any limitations placed on Kechiche’s vision, and if the film might have improved had someone taken him aside at some point and given him a lesson in the more harmful ways that one can portray a queer person. Or maybe, as Julie Maroh, the author of the graphic novel upon which the film was based, has lamented, the film ultimately suffered from a lack of queer advisory. “It appears to me that this was what was missing on the set: lesbians.”

Adèle is a high school junior newly arrived in her teenage sexuality. Her single encounter with a teenage boy is a sex scene that would be graphic to many American viewers, and yet we are meant to understand from her expressions that she is disinterested, distant, even bored. So this is tame, we think. The passion is to come. And thus we encounter one of many tropes of the lesbian film: The obligatory sex scene in which the character who will later find homosexual love must first dabble in heterosexual intercourse, where we get to witness their boredom, their awkwardness, the obviousness of their discomfort in this event. You’ve seen it many times before. The scene is meant to stand in contrast to the later sexual encounters with Emma, and yet this seems the least rehearsed of those scenes, the least choreographed and mechanical and voyeuristic.

And why wouldn’t it be? The vision of this film comes from a straight male director whose uncomfortable consumption of the actresses’ bodies is hardly subtle. Heterosexual intercourse would be the easiest for the male gaze responsible for the film to portray and naturalize. In Kechiche’s film, heterosexual intercourse doesn’t occupy the same lofty pedestal of lesbian intercourse, where the female form, untouched by maleness, preserved as “pure” by lesbianism, is seen as sacred and mystical. If you don’t believe me, wait until the scene where the man is giving a lecture to a group of women on the mysterious power of the female orgasm in art. Of course the sole straight sex scene of the movie seems like the most realistic, the most casual and banal. Lesbianism via Kechiche is incapable of being casual. Its intensity is all-consuming, inhumanly magnetic. And as far as I can see, that in itself is a problematic framework for a straight man’s portrayal of a queer narrative. 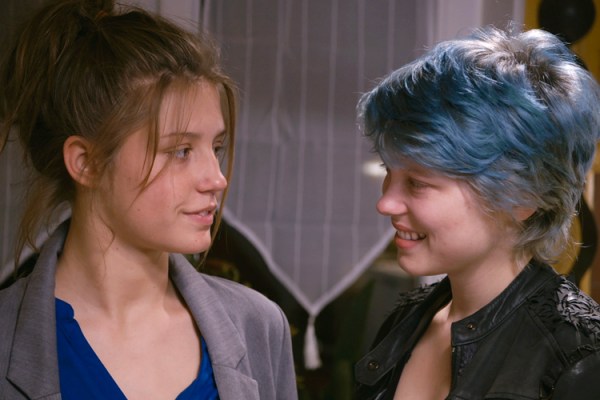 Of course, I’m already doing a disservice to the film by using the term lesbian. Adèle’s story is infinitely more complex than the “lesbian coming-of-age narrative” it has been labeled, more often than not by people who would not have to be familiar with a history of queer filmmaking. Critics who refer to the character as a lesbian are mistaken, although I don’t blame them for not realizing that, given the way mainstream media portrays lesbian-identified women. Adèle is not a lesbian, or at least she never identifies herself as one, and one would say that her actions throughout the film don’t suggest she is monosexual at the very least. She is queer in some capacity, though, but this is not a term I would expect to crop up in the film. It seems a case of erasure to call Adèle a lesbian, when her multiple experiences with men seem equally legitimate to her experience with Emma.

Kechiche has not created a film about ambiguous sexuality, though, or one where the characters’ relationship remains unlabeled and artistically chalked up to the blindness or unpredictability of love. On the contrary, Emma is very firm in her sexuality, clearly stating her preference for women, only being shown in sexual situations with women. Emma is disappointed when Adèle hides her relationship from her family, and later from her coworkers, as Emma has always been confident in her identity. Her sexuality is tied to her art and her place as an artist, to which I can only say, “But, of course.” I’m sure Mr. Kechiche desired to make a point about how Emma is able to feel more comfortable in her identity and her work because she comes from the place of an artist, but I’m less sure that he knew the more dangerous trope he was playing into in such a portrayal. Queer sexuality, particularly female queer sexuality, is all too familiar with the caricature of the enlightened and liberated artist, the ties between that caricature and the idea of lesbianism as sexual experimentation. Of course, the trope implies, the artist is a lesbian, because she has the time and the liberal worldview to “play” in such realms, and alternative sexuality is a thing that belongs to people of privilege, people of impractical careers and creative mindsets. It can only be playtime to those who aspire to be teachers rather than professors, whose class level has them searching for practicality in their lives, whose narrative is bookmarked by men.

Which brings us to what boring narrative, exactly? Adele’s romance with Emma is framed by heterosexual relationships. Heavily implied or not, it seems an awful lot like the classic case of the experimental dalliance with the liberated artiste. The film ends with Adele being chased by a man who we assume will catch up, a man who flirted with her at a party and asked her what it was like with women, if it was more gentle. I thought that Kechiche would be aware of the fact that this man is “that guy” and everyone hates “that guy,” but “that guy” appears to end the film rewarded by the implied romance of Adele. And if that is the case, what a sad and limiting narrative Kechiche is promoting, consciously or not. Perhaps if we’d focused more time on the daily relationship of the two women, rather than close shots of Adele’s underage parts or the prescriptive too-long sex scenes, we would have been able to better understand the passion between these two women, and why it was much more than that implied dalliance.

Julie Maroh has weighed in on the adaptation, and her comments concerning its sex scenes stood out to me. “This is all that it brings to my mind: a brutal and surgical display, exuberant and cold, of so-called lesbian sex, which turned into porn, and made me feel very ill at ease.” All I could think as I watched the scenes was that there were not two people fucking because they were desperately, even harmfully, in love. It looked like two women fucking in a way that would be stimulating to a viewer with little expectation for queer intercourse. It didn’t look like a young woman discovering the body of her partner for the first time. It didn’t look like an experienced partner relearning passion in the arms of her new lover. The voyeuristic angles, the awkward and choreographed movements, and all of them made me feel uneasy, unable to forget the directorial eye, and, quite frankly, bored. I feel sorry for those straight individuals who thought they were about to see something scandalous. Besides Kechiche’s somewhat clunky fetish for women’s asses, there’s little here that would shock your average Crash Pad viewer.

I expected something titillating, and did not find it. Is this still an important movie? Well, in some ways, yes. There are moments of aesthetic beauty that are worthy of applause. The film is about a woman, and she is a queer woman, and that is groundbreaking in 2013, unfortunately or not. Yet its overwhelmingly positive reception reminded me of Brokeback Mountain‘s debut, when the queers watched quietly as the critics stumbled over themselves to praise the performances of two straight actors succeeding in the “difficulty” of a gay role. Queerness as portrayed by straight people, as envisioned by straight people and directed by straight people, is Oscar bait. Brokeback Mountain isn’t an example of gay cinema anymore than Blue is the Warmest Color is an example of lesbian cinema, and I’m sorry if that comes as a shock to you. A narrative about queer people as directed and portrayed and produced by straight people cannot be considered a work of queer cinema in the same sense that a film written, directed, and portrayed by queer people is.

Do I sound like a cranky queer? I’m sure I do, especially to the devout fans of this film who include top critics and acclaimed filmmakers. I think I’ve become very sick of this continual settling for something subpar in queer portrayals in film, especially when it’s a straight male filmmaker, especially when I’m being made to feel gratitude for the bare appearance of a queer story, and most especially when the film receives widespread praise. Many of the comments about this film have mentioned the fact that it doesn’t matter that the narrative is about two women, because love is universal and the story is telling a universal story. But it does matter, because queer stories are still different than heterosexual stories. They are different in very important and unforgettable ways, and to dismiss that fact, to say as the director has that the issue of class is more important than the issue of queerness, is ignorant on a number of levels. Queer stories can be universal, but they should still be told differently, and by the people who intimately know them.

Before you go! It takes funding to keep this publication by and for queer women and trans people of all genders running every day. And A+ members keep the majority of our site free for everyone. Still, 99.9% of our readers are not members. A+ membership starts at just $4/month. If you're able to, will you join A+ and keep Autostraddle here and working for everyone?
Join A+
Related:blue is the warmest colorwomen in media