The first thing you should know about Concussion is that Robin Weigert has sex. A lot of sex. With a lot of women, no two of them alike.

Actually, maybe that’s all you need to know. But I’m mad at myself for saying so, because that really shouldn’t be true — the presence of a scene in which women have sex (or even just kiss, or maybe hold hands in an evolved way) shouldn’t still, in 2013, be a good enough reason to see a movie. And by suggesting that it is, I feel like I’m complicit in the fetishization of lesbian sex or the general objectification of women or some other -ation or -ism or -ickiness.

But, well, in the cinematic landscape, lady love scenes are still few and far between and as difficult to find as Heisenberg’s meth-money burial sites. That’s not my fault.

The good news is that Concussion itself doesn’t think the sex is “enough”: the film aims to prod all the regions of your brain, not just the pleasure centers. Despite being very, very, very (VERY) much “about” lesbian sex in particular, Concussion is also about human things in general. Some of the human things are interesting and some of them are irritating, but they all feel real, despite the occasional plot contrivance. 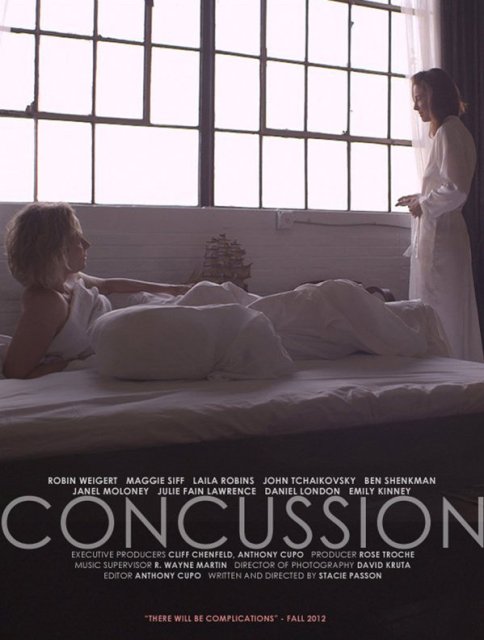 Robin Weigert plays Abby, the quintessential bored housewife — except she’s the wife of a woman (Julie Fain Lawrence). The house, the kids, and the leafy cul-de-sac (DEAD END, get it?!) are all just as they should be, and so of course Abby is dissatisfied. One of the first things we hear her say is “I don’t want this,” and she’s not just talking about the actual concussion she’s just sustained. She’s talking about her life, about the days she lets go by, laundry and school lunches and spin classes and dinner parties, same as they ever were.

What Abby wants instead, or what she chooses as a tool for figuring out what she wants, is a lot of sex. She gets this by becoming a prostitute with a very select clientele: women only, and only the ones she approves of. And she entertains them in a fixer-upper loft she’s fixing up — “interior design” takes on way too many meanings. She’s really just throwing things at the wall to see what sticks.

Some reviews of Concussion compare it to Belle de Jour, in which Catherine Deneuve plays a similarly dissatisfied housewife who also becomes a lady of the night, er, afternoon. But the reviews I’ve read don’t mention the big difference between the two sexual odyssies: power. Far be it from me to choose Robin Weigert over Catherine Deneuve (I don’t think I would in real life … actually, can I just vote to lock them in a room together?), but I’ll choose Concussion over Belle de Jour any day, because Concussion did not squick me. And that’s largely because of the level power field in which Abby plays. The one time she finds herself in a power game, she calls a time-out so quickly, you’re not even quite sure what happened.

And unlike Séverine in Belle de Jour — who wants to vet her clients but isn’t allowed to — Abby gets to meet her johns/jills first. Not just meet them: have coffee, have a chat, look into their eyes. Could that be more lesbionic? (Way back when I was in college, the cool lesbians actually used “coffee” as a euphemism for sex. It’s hard to type when I’m rolling my eyes this much.)

I found myself evaluating Abby’s clients right along with her. Is this one a kind-hearted person? Has someone done her wrong? Is she just having a lark? Will she let go, give in, really go there? The anticipation is what makes each encounter sexy, and the array of ladies of all shapes and stripes is why Concussion slakes our thirst in the desert of lady love scenes: there’s a lot of actual love, or at least respect and fondness, on the screen. It’s belle de coeur, not belle de jour. (This is the part where you roll your eyes at me.)

In less careful hands than director Stacie Passon‘s, the lineup of clients could have turned into a parade of clichés. But the camera, like Abby, meets each woman on her own terms. Some of the couplings feel sweet and celebratory, while others feel risky and untethered — and some are everything at once. Almost all of the sex scenes are beautiful to behold, and none of them feel gratuitious. In fact, the “sex scene” label doesn’t quite fit. 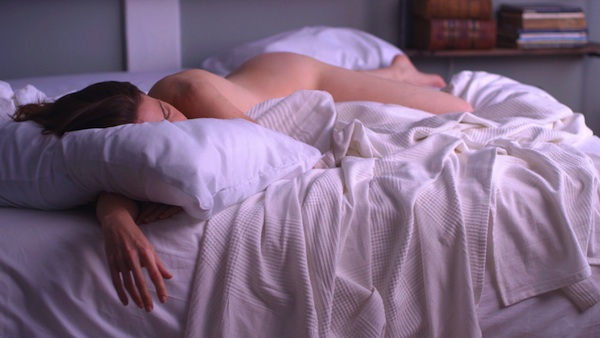 That’s not to say there isn’t a lot of skin in this flick. Some critics are calling Weigert’s performance “brave,” but she doesn’t once seem to be out of her element — which is brave in a different, Jodie Foster-y way. But whether she’s stretching in this role or just, uh, stretching in bed, Weigert deserves the praise; fans of her TV work will say it’s long overdue. Her acting skills are always solid and are occasionally remarkable (despite the shortcuts she takes with Beals-ish crysmiles). And the rest of the cast is right there with her. You’ll recognize Maggie Siff as one of Don Draper’s almost-conquests, and Laila Robins of Female Perversions (and of every random TV show ever, much like Weigert) gives a memorable performance in just a few minutes of screen time.

Of course, it’s not all hearts and flowers. Power games or no — and men or no (“God, no,” says Abby when the possibility is presented) — this sort of sexcapade always has consequences. But Concussion never really draws any conclusions, so between Abby and her divorce-lawyer wife (divorce lawyer? clank!), it’s not entirely clear whose head-thunk hurts most. You could call that fuzziness a lack of vision or a bit of directorial cowardice, but I think Passon’s just interested in the gray areas of life. Abby’s shifting state of mind can’t be summed up as a midlife crisis or sexual frustration or any other reductive thing; she’s complex, inconsistent, changing. She’s human.

At the end of the film, Abby hasn’t exactly come a long way. She’s just askew, squinting at her beautiful house and beautiful wife and asking herself how she got there. She has a lot of the things — and has had a lot of the ladies — she wanted, but she’s not sure it all adds up to much. Before the literal and metaphorical blows to her head, Abby could see PTA conversations and home improvements as just another layer in a stacked-up life. Now everything’s tacked together at odd angles, and she seems just as interested in fixing it up as she is in tearing it down.

I too am slightly askew from where I started: the sex scenes are reason enough to see Concussion, but you’ll end up asking yourself why you didn’t want more than that. Producer Rose Troche, who is partly to credit/blame for Go Fish and The L Word, was right to see a lot of potential in director Passon; I hope we see more from her soon. And although I haven’t seen Blue Is the Warmest Color yet, I’m pretty sure Concussion is the better bet in your search for cinematic oases. Beauty is truth and truth beauty and all that, but in Concussion, lesbian is human, and that’s really all you need to know.