A new study from The Journal of Homosexuality conducted by Alison Che and Richard Wassersug has revealed yet another way in which gay people are infinitely more evolved and intelligent creatures than straight people: we’re way cooler about how we handle hand-holding. 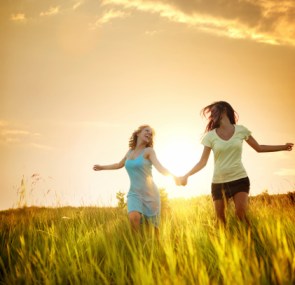 most of all, lesbians are more likely than straight people to run exuberantly through a field while holding hands

It turns out that there’s a surprisingly plentiful bounty of research on mammalian hand-holding habits. Because “the simple biomechanics of handholding require one partner to take an overhand grip of the other person’s hand,” many smart humans have wanted to investigate the precise impact of social norms and physical stature on which partner adopts the lead/anterior hand vs. the trailing/posterior hand.

These studies have shown that when heteros unite in hand-holding, men generally take the “dominant hand,” a situation often credited to men usually being taller than their female partners. But researchers note that social norms about men as “protectors” of females have an impact, too, because even when the woman was taller than her male partner, “the male is still significantly more likely to be in the lead position.” (I’d be interested to see the impact of actual hand size, however, rather than full-body height.) In his 1971 study, Erving Goffman wrote about the egalitarian-seeming but not-actually-egalitarian traditions inherent in heterosexual hand-holding:

“The insides of the two hands are pressed together, in mutual embrace as it were, but the outside of the male’s hand typically faces the oncoming world, whereas the outside of the female’s hand merely follows in the wake of projection… [the man is able to] let go at will, since he is the grasper, allowing him to deal with the enemy; she, however, must wriggle out to be free…but… for what reason could she have for needing to free her hand?”

In a 2004 study of howler monkeys, researchers found that males were generally the “initiators” and females mostly the “recipients” of hand-holding, which they hypothesized reflected either a display of dominance or a “care-giving and/or mate-guarding role.” Multiple researchers have apparently concluded that hand-holding is “regarded as representing differences in power and/or stature between the two people holding hands.”

Naturally, Che and Wassersug wondered how this might play out with same-sex couples, which studies have shown to be more egalitarian in general than straight relationships, and therefore surveyed 340 American women in same-sex relationships about their hand-holding habits. Participants, found online, were asked to hold their partner’s hand, observe their position, and then provide information about their “age, height in comparison to their partner’s height, handedness, duration of their relationship, length of time living with that partner, their income, the country and state/province in which they lived, if they had previously been partnered with a male, and whom they felt had the most ‘say’ in decision-making.” Che and Wassersug’s stated goal:

They found that “handholding position does not reflect a dominance or power differential between partners, at least within a female-female relationship” and instead was “a matter of anatomical experience.” Age had no significant impact. The only two variables that impacted who took the top was height and dating history . Women who were taller than their partners and women who had never dated men were more likely to take the lead/anterior position and women who’d dated men in the past were more likely to take the posterior.

One of the questions Wassersug and Che asked the participants, “who takes the lead in a sexual or intimate setting, e.g., initiating a kiss/hug?” was particularly interesting to me. The first half of the question seems to be an academic way of asking “do you have a top/bottom preference when you do the horizontal mambo?”, but the example given (initiating a kiss or hug) is (as far as I know) hardly a correlate to top/bottom preference in the sack. It’s difficult to know how participants interpreted that question, too, but 26.5% said they took the lead, 19.1% said their partner took the lead, and 54% answered “no difference,” and although Che and Wassersug said their findings “approached statistical significance” related to hand-holding, it didn’t quite go all the way. They ultimately concluded no significant correlation between initiative-takers and leading hand-holders.

There was also no correlation relating to income, age disparity, or who made household or relationship decisions, but Che and Wassersug did wonder “whether a partner’s self-identification compared to that of their partner, on a butch/femme spectrum, correlates with their handholding position.” They then took a giant leap into the canyon of WTF and speculated, “Since the partner with the posterior hand is likely to be shorter, does she perceive herself as more “femme” (as the term is currently understood in the contemporary lesbian community) in comparison to her partner?” Clearly I didn’t need to pass statistics to know that there is zero correlation between height and gender presentation or butch/femme roles in queer relationships. (And I think it’d be an entirely different study altogether to examine whether ingrained patriarchal expectations might impact our personal perception of our gender identities and presentations regardless of our public presentation or identity, and that study would also have to look at physical variables besides height (such as body type, weight, etc.). (It’s a topic we’ve dug into a few times here, like in this essay.))

Che and Wassersug concludes that their data is “the first to show that the taller partner will likely have the lead hand even when sex differences are eliminated from the partnership.”

They end with a helpful tip to all ye intimacy-seeking lezzers and queers and homos and bis and pans and gays out there: “handholding can be a factor in staying intimately connected to one’s partner, independent of other sexual practices.” 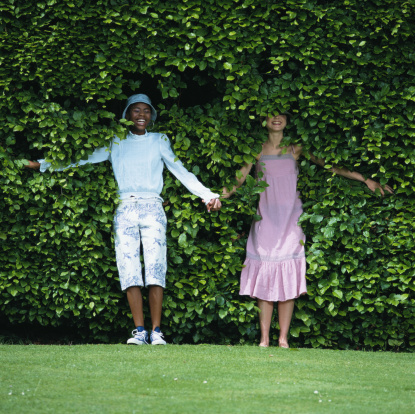 I wondered while reading this why I’d never even noticed who took the dominant position when I held hands with my partners. See, I’m taller than my girlfriend, but I’ve been taller than all my girlfriends because I’m taller than 99.3% of American women. I’ve had many relationships with men but my girlfriend has not. We make decisions together. She’s butch and more dominant, but I’m not femme — I’m just a girl in hoodies and jeans who likes eyeliner. So I asked her who takes the top when we hold hands and she answered, “You do, despite the fact that I would prefer to. You always switch your thumb to be on top.”

I look forward to a future study on how being a pushy bitch with giant hands impacts hand-holding egalitarianism. Or you know, maybe it’s just ’cause I’m tall.