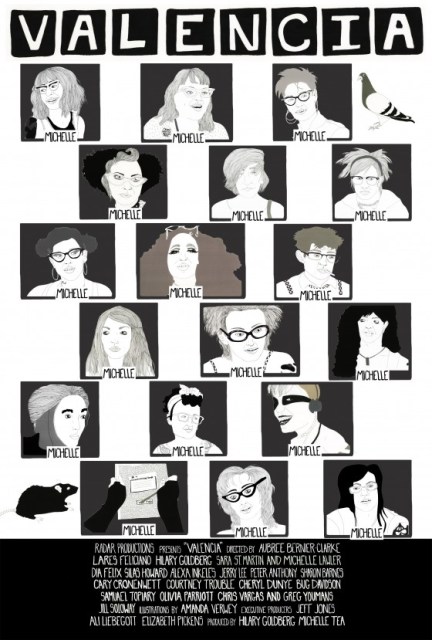 The movie Valencia, based on Michelle Tea’s 2000 novel of the same name, radiates with the spirit of collaborative filmmaking, a ‘do it our damn selves’ Sister Spit mentality and the occasional handful of shrooms. Tea and producer/director Hilary Goldberg selected 20 filmmakers to shoot 5-7 minute version of the chapters in Valencia. Courtney Trouble, Cheryl Dunye, Samuael Topiary, and Bug Davidson are just a handful of the directors brought in to capture the essence of their chapter of Valencia through their unique creative vision and various artistic mediums. Valencia’s got claymation buffalo dykes, half-naked mannequins, a dog that pops out an eyeball and a fisting scene layered in wrenching prose. The ‘Valencia Chapters’ created were then edited into the most masterful dyke-centric artsy-weirdo-stoner film I’ve ever seen. Running almost two hours, Valencia weaves in almost every possible life-altering scenario with queermos of all presentations, ethnicities and multi-media formats. 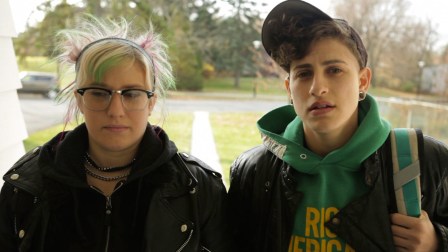 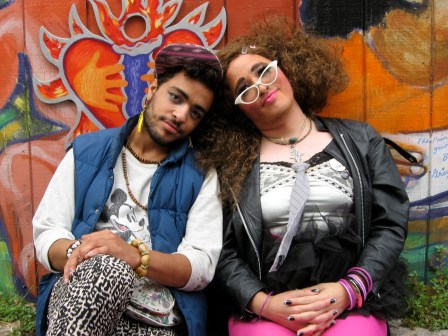 For each of the 20 chapters, there is a different ‘Michelle’. There’s drag queen Michelle, fat femme blonde Michelle, dreamy ethereal angry Anne Hathaway-looking Michelle, Michelle with purple hair, Michelle with turquoise hair. (I was waiting for Beyoncé Michelle but no film is that perfect). The film follows her years as an angtsy/artsy 20-something dyke living in San Francisco during the early 90s. Enter riot grrls, ‘zine making parties, righteous alternative haircuts, Dyke Marches, communal binge drinking and all of the Michelles falling into and out love with all of the film’s Irises. There’s even room for reflection in the moments where Michelle Tea and real life Iris discuss their motivation to participate in that queer dyke-centric movement while images of parades flash across the screen. When do we ever get a chance to comment on ourselves and our actions with even half a moment of clarity?

“We were not gay. We were queer. We were dykes. We were really against the man and capitalism and always aware of everything that was unfair and unjust”.

I paused my viewing of Valencia and replayed that voiceover a few times. Those lines are what I tell myself when I wake up in the morning. ‘I’m not gay. I’m queer. I’m a dyke. I rally against the man and capitalism and I’m always aware of everything that is unfair and unjust’. Everyday that’s pretty much my mantra, breathe in, breathe out, add a side of occasional apathy/Netflix laziness, and I’m right in there. It’s a statement that says so much and hides under not saying anything at all about the person that you are when everyone shuts up and lets you breathe. Just saying those words in whatever form they manifest is enough some days. They just need to be said. Valencia said them. Out loud and on screen. Stomping.

This type of filmmaking is something that needs to be harnessed and passed along. Gather up a story, some friends, give everyone a piece of the queer pie, and say “go make a thing however you think it should be made. then we’ll bring all our bits together and make magic”. Valencia isn’t perfect. I wish there’d been a Black or Asian or Differently-Abled or a ‘from the hood’ Michelle but I was overjoyed that there were QPOC behind the camera telling this story and turning Michelle into whatever they wanted her to be. I feel like the creation of Valencia is a call to react to art and rail against what we’re told is art and what we are told is universal. Why not make our own chapters? Make our own artworks into films with all our artsy weirdo friends? Valencia shows what can happen when we own what is ours. Michelle Tea tells her story through many faces, directorial lenses and the ability to let go and let others do what they do best. Usually there’s one voice, one image, one point of view that matters and Valencia breaks all that up and distorts predictable storytelling into something authentically queer and revolutionary. 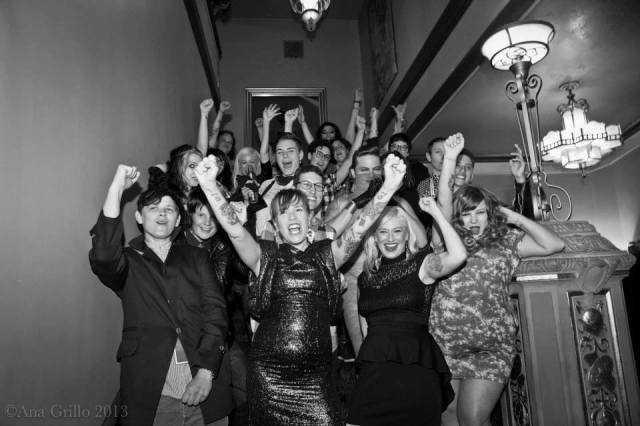 Michelle Tea and the many faces and artists behind Valencia the movie. 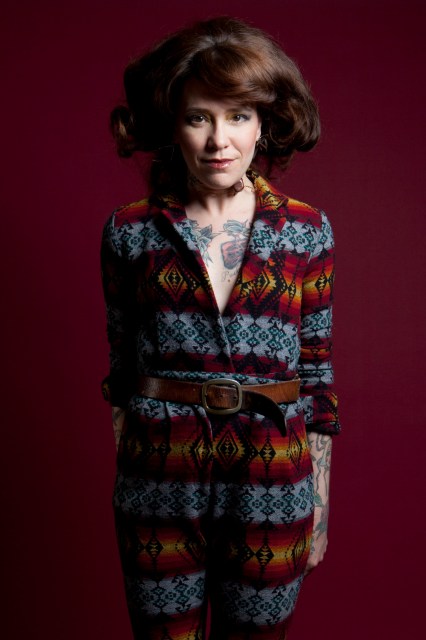 I interviewed Michelle Tea for this piece. I started with some necessary truths. I told her that I was halfway through the film and hadn’t ever read Valencia. She said, “We’ve got 15 minutes. Right now. Can you do this?” Halfway through Valencia, I was still bouncing with geeky excitement over how brilliant, dark and campy it was. How I wanted to do the interview and then add my own version of a chapter to the Valencia canon. My Michelle would look more like me or like the women in my neighborhood. Just the prospect of it was exciting. I wanted to ask her to take over all the making of all the movies forever and just hand out bits of script to all the most badass queers on the planet forever. So, hell yes, I could do the interview because there’s no better time to interview someone than when you’ve lost yourself in their work.

What are your gut feelings about Valencia? What moments moved you?

The moments of love like in the opening chapter (Directed by Aubree Bernier-Clark). That Michelle is so sincere. Loved the ending shot in the bed. It was such a great way to come out of a chapter that had such heaviness and intensity.

…And like, the queer story isn’t often considered universal. As the character of Michelle is embodied you see how universal this story is. You see that you could have taken it further and used so many different people and the main character would still be universal. A lot of different people can relate to that and to the people in her world.

How was the decision made for it to be a collaborative single-narrative film?

I had the idea for a long time. I have a lot of filmmaker friends…that can make a short. Making a feature takes a lot of resources, but shorts are something people can manage.  So I knew I could send a chapter to each person. I sat on this idea for years because I had a lot of uncertainties about it, but then I was hanging out with Hillary Goldberg, Silas Howard, Peter Anthony and I brought it up and they all jumped on it. And so I knew that others could/would be into it, so I got excited about it and just started asking people to be a part of this thing.

Also, the best things in my life have come out of lack of resources. When people have to come together and are creative then we’ve got 18 different versions of the material and so much more of a fun ride.

How involved were you with the aesthetic of the film? It’s like a combination of stoner/camp/surrealism/art project.

Fucking luck! We trusted that it would somewhat work, even though everyone had different levels of ability. We believed everyone would do the best that they could. We picked people who had great aesthetic and were doing interesting things. and I’m so grateful that we did it that way because it was awesome.  There was very little discussion on the front end, just technical discussions on what they needed to shoot on etc.  Each filmmaker was left to their own devices to bring the elements they wanted to bring.

Will you make more films in the future?

Yes, I loved it, in a big way.  The work load was totally manageable and I’d love to do it again. It happened under RADAR and we’re a literary non-profit.  We have funding but the cost of the film was high. I don’t know if this was a project RADAR could take on again in the same way but we could try for grants. We definitely learned how to do it more neatly in the future. It (Valencia) was such successful model of how to make a film that I am sort of interested in making that a film. But, yes, I also have plans to make more films.  I love movies so much. 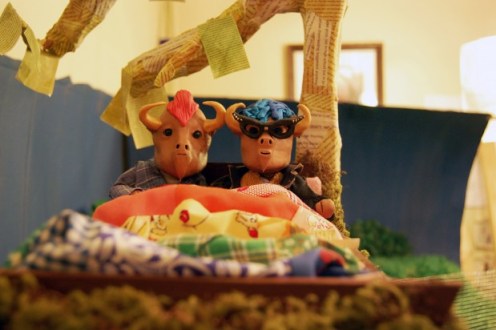 Claymation buffalo on the set of Chapter 5 of Valencia: The Movie directed by Hillary Goldberg.

Valencia the movie premiered on June 21st as part of Frameline, the LGBT film festival in San Francisco. As of right now, Valencia is making the film festival rounds. Check out Radar Productions for information on the next Valencia screening. You should also know that Angelina Jolie is in the film, kinda. That’s important. Also, any movie that uses “I Can’t Wait” by Nu Shooz in a part scene is a winner with me. Have you seen Valencia? Check out some trailers!

Valencia: The Movie/s, Chapter 3 Trailer from Aubree Bernier-Clarke on Vimeo.