The world is dark and light is precious and here’s a display of fireworks: Gabby Rivera is writing America Chavez’s new solo comic book! Marvel announced their plans to give our favorite queer Latina teen her own title just last month at New York Comic Con, but we had no idea they’d bring on a queer Latina to write her; much less one of our all-time favorite queer Latina writers. (And Sara Ramirez’s too, while we’re on the subject.) Gabby, as you know, is the author of Juliet Takes a Breath and a longtime contributor to Autostraddle and the former head of our QTPOC Speakeasy. She’s now the Youth Program Manager at GLSEN. 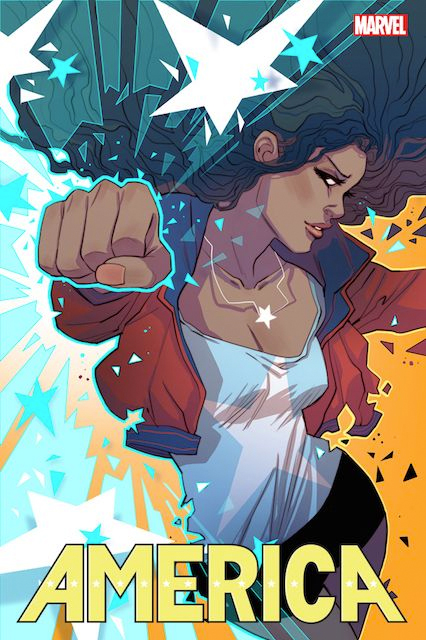 Refinery29 posted the America Chavez creative team announcement today, along with an interview with Gabby and a first look at the art for the new book. We also got a little information about which Marvel universe America will be inhabiting; she’s been in practically all of them! And we got a little information about how our Trans Editor and Drawn to Comics expert Mey Rude consulted with Gabby on the book. (I buried that lede because I wanted to stretch out the excitement.)

What were some of the things that excited fans about America?
Gabby Rivera: “One is, the identities: Queer Latina. She’s also a positive presence and has these catch phrases, like ‘chico.’ And she has feelings for Kate [Bishop, a.k.a. Hawkeye]. But there are more questions about what her powers are, who she is and what is she interested in. My friend Mey was like Gabby, ‘Don’t try to write a superhero comic book. That’s not why they reached out to you. Put all the joy and excitement and energy and quirkiness that you did with Juliet and bring it to America.’ So what song does she listen to when she wakes up in the morning? Does she brush her teeth in her underwear? What type of girl is she? The fundamental questions you have about someone you want to be friends with.”

One of the most frustrating things about women on superhero teams — in both comic books and movies — is that their actions are almost always overshadowed by the men on the team and their motivations are rarely explored. Think about Avengers: Age of Ultron. Black Widow, as written by the guy who gave us Buffy, was reduced to a woman who couldn’t have children. That’s was it. That was her main thing. The huge backstory reveal feminist fans had been promised for years after watching women in Marvel’s cinematic universe get ignored and tossed aside was that Natasha Romanov’s major life milestone was a decision to become an assassin instead of a mother. It was the one thing that defined her entire personality.

Well, not in this new Marvel book! Gabby says she’s excited to explore America’s agency and her story outside the teams she’s been a part of: “So my thinking for this new book is that she’s finally asking herself that question: What’s in it for me? Why am I fighting with these people? What I want is to go to college and I want to start over, and I want to learn about myself and do this for myself.”

I can’t wait to watch her answer all those questions.

America Issue #1 will arrive in March 2017. I’ll bet Mey and Gabby will have a conversation about it on this very website as the drop date gets closer!