Ever since she graced the page of Young Avengers #1 by Jamie McKelvie, Kieran Gillen and Matthew Wilson, there’s been an ever-growing chant of her name.

The masses of queer, Latinx, women and feminist comics fans have finally been heard and our chants are answered. We cheered for her.

And she responded America yes.

At New York Comic Con this week Marvel comics made a really great decision and announced that they’re finally going to be publishing a Ms. America Chavez solo comic in 2017 that will be called America. Very little information has been released so far, and we don’t know who the creative team will be, but we do know that Jamie McKelvie and Matthew Wilson will be on covers. 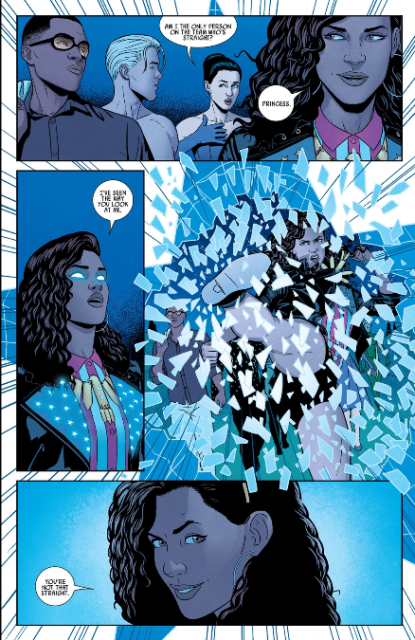 While she first appeared earlier, the place where America Chavez really began to shine was in the Young Avengers series I mentioned earlier. In this series she teamed up with other queer teens like Loki, Prodigy, Hulkling and Wiccan and Noh-varr as well with the character she’d quickly become attached to for life, at least in the eyes and minds and hearts of fans, Kate Bishop Hawkeye. This is where readers met the America Chavez we currently know and love. She was the only one on the team who would constantly call Loki on his bullshit and was undoubtedly the coolest one on an already very cool team. While she was the breakout star of the series, Marvel didn’t seem to know what to do with her and she kind of disappeared for a while. 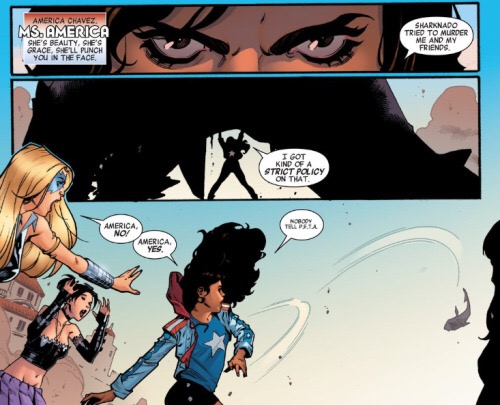 During the Marvel Secret Wars Battleworld crossover event last summer, America showed up again, this time at first in the pages of A-Force, a version of the Marvel Universe where all the superheroes are women. While the rest of the heroes there were one version of many throughout the multiverse, America is singular. She’s also singularly badass and throws a giant shark and gets kicked out of this Universe to go serve out her punishment on the wall, where she gets to flirt with yet another version of Kate Bishop, this one a medieval archer version. She was also once again written by Kieran Gillen in this Siege mini series where she’s on the wall. 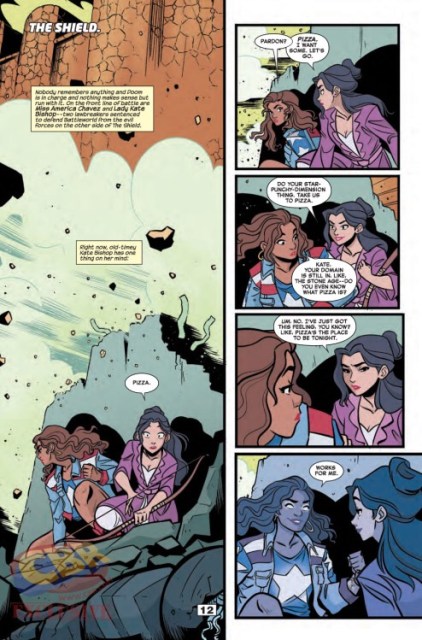 If you want to read a really cute story about America and this version of Kate, you should read the story by Kate Leth and Brittney Williams where they go on a date through the multiverse in search of a pizza. You can read this in Secret Wars Too, which was a collection of short comics by different creators and featuring different characters, that weren’t about the main Secret Wars plot.

Some of my favorite America scenes take place in the recent Hawkeye series where she was seen constantly rolling her eyes at Kate Bishop’s white nonsense (although it could and should be argued that Kate is mixed raced Asian American and white, but that’s an argument for another column). There is, however, a super super cute scene where the two go dancing, so you should check that out. 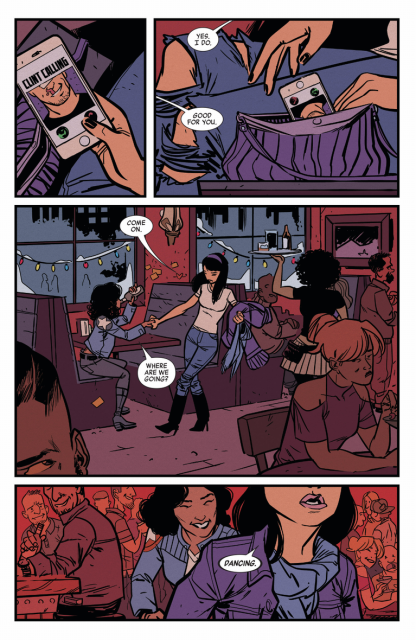 Most recently she’s been seen in The Ultimates, where she’s able to use her incredibly powerful powers to fight off intergalactic and interdimensional threats like galactus. She also still takes selfies and flirts with cute girls though, so don’t worry. But she’s still not being written by a Latina and she’s still not the star of the series. At least half of that will be changing, but hopefully more.

No matter who’s writing her or what team she’s on, America Chavez follows nobody’s rules but her own. While other teen superheroes look up to and follow the lead of their role models, America completely remakes both the “patriotic” aspect of her name and the superhero game in her own image. Although I said that she’s this way no matter who writes her, I’d still very much love to see her written by a Latinx writer or Kate Leth.

When you put this upcoming America series together with the Unbeatable Squirrel Girl, Silk, Ms. Marvel, Wolverine, the new Kate Bishop focused Hawkeye and my number one favorite comic, Patsy Walker, aka Hellcat, Marvel is building a pretty impressive lineup of solo comics starring kickass young women. Several of these titles are also written by women, or in the case of Hellcat, a queer woman and Ms. Marvel, a Muslim woman, so hopefully a queer Latina will be hired for this book. Patsy Walker, aka Hellcat is my favorite superhero comic of the past two years, but it’s gonna have some very tough competition from this book.

Batgirl and the Birds of Prey #3